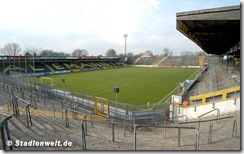 As you can see its not my picture, but I feel I had to say goodbye to one of Germany’s most loved stadiums. Alemannia Aachen’s Tivoli is thought to be by German football fans as one of the most atmospheric out there. Aachen, a large spa city located on the border with Belgium and Holland has seen its team achieve a minimal amount over its 109 year history. Runner up in the German Bundesliga (and 2.Bundesliga) as well as 3 German Cup final appearances (which they all lost), including the most recent appearance in 2004 when Werder Bremen beat them 3-2.

Despite the lack of success, attendances at the 21,632 ground have always been fairly good and I experienced that when I went to visit in 2001 when they hosted Rot-Weiss Oberhausen to the Tivoli. A 2-1 win, as well as great fans is what I remember and my ticket to stand on the famous “Würselener Wall” only cost 8 DM or £3.50. A fantastic amount for what was 2nd tier football. (No chance of that happening in the Championship…)

The picture below shows close Aachen’s new ground (The Neu Tivoli) is to the old one. Aachen welcomed the Tivoli to league action on Monday (Aug 17th) night in the only way they could. By losing 0-5 to St Pauli, so will hope for a lot better when current 2.Bundesliga whipping boys FSV Frankfurt visit on Aug 30th. As for the old Tivoli, I’ve heard the fans have bought it as a memorial, no idea if this is true, but great if it is and will be a permanent reminder of Aachen’s old and great home. 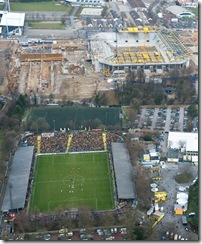