2010, a new month, new year and new decade. My first game of this new year was actually one I didn’t have to scarper round on the morning of the game to find anywhere that had actually survived the freeze. It was touch and go though as the game had a pitch inspection in the morning and when nearby (sort of) Wells City failed their inspection, I was starting to get the Facebook Ground Guide app ready again until a surprise result came through that Ilfracombe’s Marlborough Park pitch had passed the inspection and it was game on! Also, normally when you probably look at where I go, you might wonder, “why the f**k did he go to that game?!”, this game however, actually meant something! (Honestly) Not only was this a local derby, but also was 2nd vs 1st in the Western Premier, with Bideford having a 5 point gap over their rivals, but had played a game more. 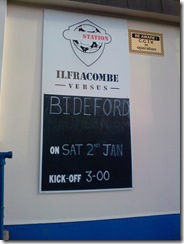 Ilfracombe is a seaside resort on the North side of Devon, and sits right on the coast surrounded by cliffs. The town itself is known for some unusual landmarks such as Hillsborough Hill which was the site of an iron age fort and the Landmark Theatre which with its double-conical design which is always seen if you want to go into the centre of Ilfracombe as its one of these places with one road in, one road out, etc. The town is a fairly touristy town, although it lacks a proper beach so I’m not its biggest fan. The town’s football team, Ilfracombe Town have played at their Marlborough Park home since 1923 and home to competitive football since 1924/1925 when the club played in the E.Devon League. They joined the Western League in 1949 and although starting in Division 3 then, they had become a Division 1 side by 1952/53, but relegation and poor support meant the club withdrew from the league, back to local football in 54/55. After cruising in the North Devon League at the beginning of the 80’s, re-entry to the Western League was only a matter of time and they were back by 1984. They finally became a Western Premier club in 2007/2008 and finished 8th, before struggling last season to a 14th place (out of 20). Under Barry Yeo, the Bluebirds currently sat 2nd after a blinding start and were looking to continue this against local rivals Bideford. 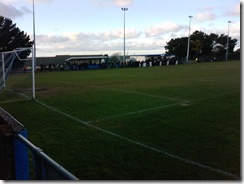 Bideford’s solid start this season had seen them sat at the top of the league for a few weeks now and there had been big news come out recently that Bideford had applied for promotion to the Southern League for next season. (A Top 2 position has to be secured first and ground improvements also would need to be implemented) Bideford had won their more important derby against Barnstaple on Boxing Day with a 4-3 win, which instantly meant this game wouldn’t be as good. (Sod’s law) When I arrived at Marlborough Park, I was quite surprised by how different the ground was to other Western Premier grounds that I had visited, with the ground seemingly built into a hill which resulted in a “Clitheroe” style sloping pitch. There was a decent clubhouse and tea bar, although it couldn’t really deal with the 378 people using it – but thats understandable. There was a small seated stand next to the clubhouse and another seated stand behind a goal which was also a novelty while the rest of the ground was hard standing and railed off. I stood behind one of the goals as it had a large wall there which at the time covered up the bitterly cold wind and had a decent view of the action that was about to unfold. 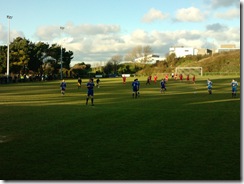 As a Bideford fan said in the clubhouse pre-kickoff, “Ilfracombe had to win this” and they came out with that attitude and won a free kick inside the first minute which Bideford’s ropey defence managed to get away. The pitch was awful today and so trying to play pretty passing football was a no no as both sides tried to combat this. The referee was already losing control after not showing yellow cards after some strong and late challenges when on the 26th minute, Ilfracombe broke away and Mike Hedden raced clear only to be brought down by Bideford player Dominic Rivans. Surely a red card! Everyone in the ground seemed to agree so too, so imagine Bideford’s delight that the referee only showed a yellow. As Ilfracombe boss Yeo shouted, “thats the biggest pile of bollocks I have ever seen”, I had to agree with him, an awful decision. The resulting free kick went close as Ilfracombe pushed on with set plays looking their most likely way to find a goal. They should have had it just before half-time when Bideford again failed to clear a corner properly and Shaun Lewis had a shot cleared off the line and two others were blocked by some last ditch defending as Bideford managed to get to half-time at 0-0, only just. 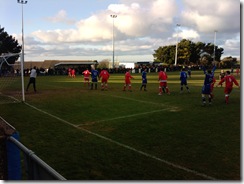 As I made the dash to the clubhouse to keep warm at half-time and attempt to regain some feeling in my hands and toes, you had to wonder how long it would be in the 2nd half before Ilfracombe were made to regret their missed chances. The answer was 60 seconds as Bideford kicked off – they crossed the ball out to the left wing straight away where the ball was worked to the edge of the area. Ben Wood’s cross wasn’t great and Ilfracombe defender Neil Bettiss was on hand to clear the ball. However he missed the ball completely and danger-man Kevin Squire was on hand to sweep the ball home, much to the delight of the travelling supporters and his team. Ilfracombe then spent the next 10 minutes trying to recover from that shell shock at the beginning of the half but Bideford didn’t really create any chances of note. Once Ilfracombe had got back into it, they nearly had a superb equalizer when Bettiss launched a low shot from outside the area, only to see Bideford goalie Ryan Draper make a great save to deny the defender. Again, from the corner, Bideford looked ropey, but they got the ball clear. Bideford had chances to wrap up the game late on, firstly Squire’s clever flick from a corner needed Darren Parish to clear off the line before Clay Bond fired past Steve Oliver after 80 minutes but saw his shot hit the post on roll into the safety of Oliver’s arms. The last 10 minutes Ilfracombe threw a lot at Bideford but again, some last ditch blocking and a defence well marshalled by Darren Hawkings (after his shaky start) saw Bideford home. When the final whistle blew, cheers of delight came from fans and players as this was a big 3 points. 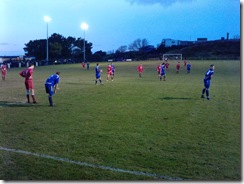 Ilfracombe will really wonder how on earth they lost this game, but if you don’t take your chances then you’ll always leave yourself open to concede. I should know this, I’m a Hearts fan. As for Bideford, every league winner this season will win a game like this. Riding their luck and then scoring a goal that comes off someone’s arse – its not pretty, but sometimes thats how Champions win. Bideford will be very hard to catch in the new year. Marlborough Park is a great wee ground and continues my every growing love of the Western Premier, its a shame now that the next nearest Western Prem ground to me is Williand Rovers which is 33 miles away. Its also my last game down in Devon until Easter at the earliest and I was extremely lucky compared to other people I know to get 3 games in over the Christmas/New Year period. Its back up North now and its Unibond time again!

Photos from Ilfracombe Town vs Bideford

- Ground: 6/10 (I like Marlborough Park – another good Western League ground) 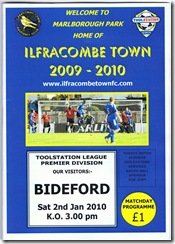