My final part of “3 in 3” would be at another close ground that was on my “hit list” as well as a team seemingly on the up. With many leagues at this late stage of the season, a lot of games were now “dead rubbers” with neither side having anything really to play for. Luckily, Camelford were going for the SWPL Division 1 West title still and had applied for promotion to the Premier so this game had a lot riding on it. They couldn’t win the league with this game, but they could take a big step forward to it by winning. Camelford is a town in North Cornwall and around 10 miles north of Bodmin. Due to its name, it has been linked to the legendary Camelot, and even Camlann, but historians have been quick to refute these suggestions. The origin of the name is probably from the original name of the river (Allen) in combination with cam = crooked and the English 'ford', though this is not accepted by all. In July 1988, the water supply to the town and the surrounding area was contaminated when 20 tons of aluminium sulphate was poured into the wrong tank at the nearby Lowermoor Water Treatment Works on Bodmin Moor. An independent inquiry into the incident (the worst of its kind in British history) was started in 2002, and a draft report issued in January 2005, but questions still remain as to the long-term effects on the health of local residents. 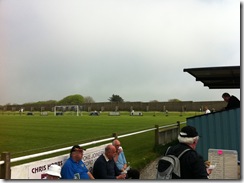 Another prime reason for picking this game was the larger than normal amount of traffic that could possibly direct me to the ground as Google Maps was really not much help at all. With the outlines of a football pitch found on satellite view and the directions to there noted, I made my way to Camelford with ease and turned up at the ground… to find it was someone’s house. Luckily a man washing his car outside so asked for directions and was given near perfect ones to turn up at Trefew Park – the modern looking home of Camelford FC. I had actually arrived at Tregoodwell, the home of their old ground which according to the programme, they had left in 2006 for their new modern home at Trefew Park. Despite being on the edge of nowhere Trefew is a lovely little ground and again the home club were well organised and ready for the masses of hoppers. Two metal stands overlooked the pitch on one side, one for seating and one for standing. Behind one goal (see above pic) was a small grass bank where you could sit and enjoy a good view of the action. The pitch was railed off all the way round with more than enough hard standing for Trefew Park to be a welcome addition to the SWPL Premier. All that would be needed is for floodlights to be put in which they already have the planning permission for approved. 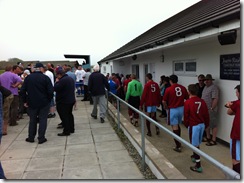 Since their founding in 1893 (as one of Cornwall’s oldest clubs) they have spent most of their time playing in the lower ends of the pyramid down in the SW in the East Cornwall Premier and South Western League. Now one of the best (if not the best) sides in the SWPL Div 1 West, they were going for promotion this time out. Manager Reg Hambly is in his 20th year in charge of the club and Camelford will be trying to get into the Premier under his leadership. Going into this game, they were top of the league on goal difference as close challengers Godolphin Atlantic had lost the Newquay derby 2-1 to their local rivals. They also had major games in hand due to an appalling winter when they hardly played. With this in mind and fellow promotion appliers Callington Town hot on their heels, they had to keep winning otherwise they would really begin to feel the pressure. On 19th April, Camelford had actually played their opponents for this game, Foxhole Stars and whooped them 7-1. Foxhole, hailing from the little town to the west of St Austell were down in 12th for this game and had played 5 games more than Camelford. With not really much to play for except entertaining a big crowd, most punters would have put money on Camelford winning this despite the games coming thick and fast at them in these past weeks. 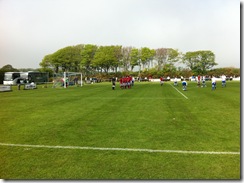 The big crowd wondered how long it would be before Camelford got going and the answer was 4 minutes when Mark Gusterson was put through and despite having a man over in a great position, he decided to shoot and fired wide as his team-made had a go for being selfish. The Cams kept going though and soon Foxhole goalie Ryan Holland was called into action for the first time to make a great save from a Kevin Murt effort. Foxhole were beginning to frustrate the home side as they had zero threat going forward but were putting up a stubborn fight in defence. Who can blame them after losing 7-1 to this side barely a week before. Holland got more plaudits on 31 minutes when he brilliantly tipped a Gusterson effort onto the post before he got a wee bit lucky as Gyles Reynolds airkicked the rebound and it was cleared. It was all one way traffic now basically and the goal did come on 34 minutes. A brilliant long diagonal ball from David Andrew found Paul Menhinick scamping down the left. His cross was met by Gusterson who had beaten Holland to the ball to power his header in and give Cams a deserved lead which they kept at HT. 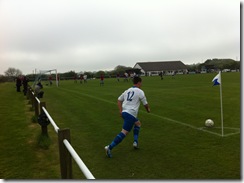 Ryan Holland was still on form in the 2nd half as he made two saves from 1 on 1 chances within a minute to keep his side in the game. This gave the away side encouragement as they actually started to leave their own half and cause some problems. This did put them liable to the counter attack however and when a cross found Reynolds all alone in the box, it looked all the world for goal #2, but he amazingly shot wide under no pressure at all. The 2nd goal was going to be the all important one and it came on 70 minutes. David Andrew was running onto the ball just inside his own area when he tried his luck from about 50 yards out. I had just sat down right behind that goal and thought the ball would just clear the bar, however it dipped right at the last second and dropped in out of Holland’s reach for a sensational 2nd goal. A massive cheer and applause from the crowd even though, lets be honest, it was a fluke. Camelford could sense blood now and smashed a post 4 minutes later after good build up play on the edge of the area. Gusterson got his 2nd of the game though on 77 minutes when another through ball cut the Foxhole defence apart and he easily finished past Holland. I did wonder if Foxhole heads would drop now but they responded well and forced home goalie Josh Colwill to make two excellent saves to keep Camelford comfortable. Right on the full time whistle Gusterson scored his hat-trick. Another through ball weighted perfectly, allowed the Gus machine to let the ball go across him and shape up to place the ball past Holland again. 4-0 the final score and Camelford’s league charge continued. 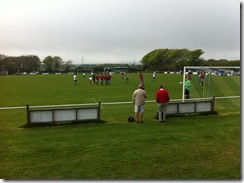 Camelford are a lovely little club on the up, albeit with their ground in the middle of nowhere! An entertaining game that showed why at the end of this season Camelford should be top of this league. With players like Gusterson and Andrew, who could easily play higher, should Camelford start 2011/12 in the SWPL Premier they (I feel) quite easily cope at that level and would be a welcome addition. As this was a hop game, there was that strange “Hop Atmosphere” but I did actually chat to a few people at this game including a Hibs fan who had made the journey down from Dundee for the extended weekend. If you can find the place, then its another SWPL team worth visiting, especially in these next couple of weeks as they try and take the title!

Photos from Camelford vs Foxhole Stars

- Food: N/A – hoppers say the pasties were excellent, but I couldn’t taste them :( 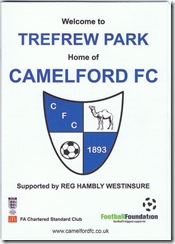