Back down in Devon I decided to take in the “magic” of one of the oldest cup competitions in the World, the Football Association Cup. While most plastic fans think that the cup starts in January with the 3rd Round draw, or maybe even in October/November with the 1st Round draw, the famous competition actually kicks off in August when the Extra Preliminary Round is played which features the smallest teams entering the competition at Levels 9 and 10 on the FA Pyramid. The 3 major North Devon sides were all in action and I decided on going to Barnstaple Town who were playing South West Peninsula (Level 10) side Tavistock and hoped Ilfracombe Town got through their tie against Falmouth Town as they had been handed a home draw in the next round. (The Extra Preliminary, Preliminary and 1st Qualifying Rounds have already been drawn) 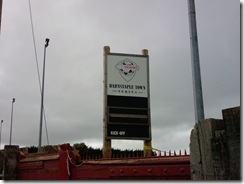 Barnstaple is the main town on the North Devon coast which takes its name from being a “staple port” in the middle ages as it was licensed to export wool. Today it is a quiet town that has benefitted from the building of the North Devon Link Road to link the town to the M5 while the start of the regeneration of the town centre is due to start in 2012. The local football team are Barnstaple Town that currently play in the Toolstation Western Premier (Level 9). The club struggled last season as most of it was spent in the relegation zone but a late run of form managed to drag the club clear and finished 18th. I saw them play last season at local rivals Bideford where they had struggled upfront but managed a decent 1-1 draw. One player who impressed that day was man mountain Darren Hawkings, however, Barnstaple had been rocked by his decision to go back to Bideford, along with top scorer Kevin Squire. Barnstaple though had signed a fair amount of new faces including ex Bideford pair, Robert Gough and Shane Tolley. Their opening two games had both finished 2-2, which included outplaying Western League champions Bitton. The visitors today were local side Tavistock AFC who played a level below them in the SW Peninsula Premier. Tavistock are based in the town near Plymouth so this was a reasonably short journey for the side. Tavistock were currently in 14th place in this division with a 1-5 defeat and a 2-1 win to their name. They finished 6th in the SWP last season and also knocked out fellow North Devon side Ilfracombe Town in the ExP Round last season 4-1, so a tough game to call this. 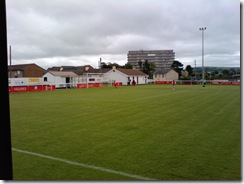 Parking at the rugby club next to Mill Road and soon in to have a look round, Barnstaple’s ground is quite nice with it being railed off all the way round, and having two areas of cover down both sides of the pitch. 500 seats apparently between them, as well as standing cover down the clubhouse side where I decided to stand. Having got there far too early, I decided to pop into the clubhouse which is very nice and got a lemonade for £1. Behind one goal is a set of large trees which block out the view of the rugby club (which is good, who wants to watch that egg shaped sport?) while the photo above shows behind the other goal where the main entrance is and the changing rooms. While Mill Road is in a fairly quiet part of Barnstaple, just outside of the centre, there are signs of it being in a large town with the multi-story council offices in plain view as well as the Taw Bridge which was built in 2007. Before the match I read that the replay (if needed) would be played on Wednesday 19th at Tavistock, could be a new ground then… 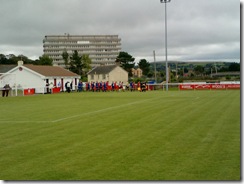 The game kicked off in fairly decent weather as both sides went at each other quite furiously with some tasty challenges coming in, especially from Tavistock, but very few goalscoring chances. The first chance was a Shane Tolley header that just went over as Barnstaple began to become the dominant side. Yet, were lucky to escape when captain Jamie Frickleton brought down Ben Davies and he looked the last man. Only a yellow card was shown as both sides began to get annoyed at the referee’s decisions. If the ref had booked the first or second bad challenge, that probably would have calmed the game down. After an awful 30 minutes the game suddenly got interesting as Tavistock tried to play the ball out from the back and Jamie Skinner stole the ball and skipped past two Tavvy challenges before placing the ball past goalkeeper Andrew Meeds to make it 1-0. Up until this point I was beginning to worry that the game would be an awful 0-0. Barnstaple though tried to throw it away when an awful back pass was nearly intercepted by Adam Carter (who must be one of the laziest strikers I have ever seen), his challenge on goalie Jamie Pow was a little rash and when the ball broke to Lee Bevan, Frickleton had to get a block on the line. Minutes later it was 1-1, when a Tavvy throw in looked to have been helped on by an attacker’s hand, it found Carter alone in the box and he smashed it past Pow to equalize. Barnstaple though got a 2nd right on half-time when a well worked move found Tolley on the right wing and his great cross was headed in by young striker Stan Paxton to give Barum (no idea why they are nicknamed that) a half-time lead. 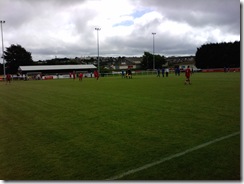 The second half was almost identical to the first with the first 25/30 minutes being quite awful with no a lot happening before a mental last 15 minutes. On the 76th minute a cross came in which a Tavvy defender clearly handled. The ref was having none of it and so Tavvy lumped the ball forward, Frickleton was penalised for an aerial challenge on the half-way line. A second yellow was shown and Barnstaple would have to play 15 minutes or so with 10 men. They should have made it safe however soon after when a great run and shot from Robbie Gough curled away from Meeds in goal and onto the bar. The game was now fully stretched as both sides looked for the goal they needed and when a Tavistock cross was accidentally handled by Jamie Skinner, the ref gave the penalty. While this was a penalty, the clear hand-ball down the other end wasn’t given and so the decision angered Barum fans greatly as it now looked Tavistock would bag a replay. However, lazy striker Carter saw his awful penalty saved well by Jamie Pow and Barnstaple lived again. The gap in fitness now showed and Barnstaple wrapped up the win in the 82nd minute when another great cross was headed in by Danny Bell to put Barnstaple through to the Preliminary Round. Both sides had one more chance, Tavistock had a header off the line while Barnstaple’s Stan Paxton missed a great one on one. The final score though was 3-1, a deserved Barnstaple victory. 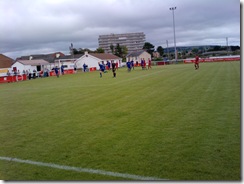 A cracking day out then in the opening round of the FA Cup. Passion, energy and some good football was good to see as Barnstaple now play Wessex League side Poole Town away in the Prelim Round. Ilfracombe let me down by losing 0-1 at home to Falmouth so my next game may not be for over a month. I really enjoyed this game and Barnstaple have definitely improved since I last saw them in April and I will probably now adopt them as my “North Devon” team and hope they get on well. Their away tie at Poole will be extremely tough but if they can do it they will face a 1st Round Qualifying tie against Falmouth Town or Street/Willand Rovers. Here’s hoping they get there.

Photos from Barnstaple Town vs Tavistock

- Match: 7/10 (quite decent entertainment that heated up at the end)

- Programme: 4/10 (poor, no information about Tavistock either) 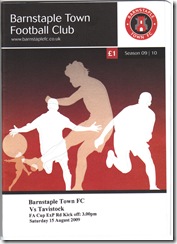 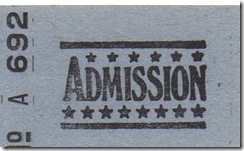