With the joyful time of “exam season” now on the near horizon, it was time to finish my season (unless a game pops up which is very doubtful) and also time to get in another ground to cap the 2008/2009 season off. With my missus born and bred in Carlisle and a last day game vs Millwall, Brunton Park was to be the ground I finished my season off on. The previous week, Carlisle could have eased their relegation fears as they took on Cheltenham Town who were League Two bound away at Whaddon Road. They could only muster a 1-1 draw, despite being 1 up and only finished the game with 9 men and nearly lost it late on. It therefore seemed Carlisle would be playing League Two football next season as they started the day in 21st position on 47 points, two points behind Brighton, a win was a must.

For this must win game they welcomed play-off challengers Millwall, a team that many fans fear and as soon as we arrived at Carlisle station a big police presence awaited us all to greet the Millwall fans on arrival. Millwall, this season had improved greatly under boss Kenny Jackett and currently went into this game in 4th and a playoff place confirmed. Carlisle on the otherhand had fallen from a last gasp playoff defeat last season to Leeds to this final day must win game. In the programme, a director opened with the line, “On behalf of everyone at the football club I would apologise for the poor season we have just completed.” It had been a poor season. 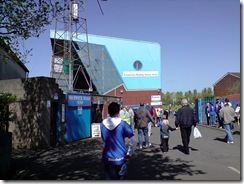 Brunton Park is an old school ground with some modern elements that make it a decent day out in the Football League, despite it being so far North for most fans to get to. We stood in the Warwick Road end, which is a strange stand, due to the layout which I havent seen before at a ground but it had a good view of the pitch behind the goal, shame I decided to stand behind a pillar for the game then. To my right was the most modern stand (I presume), the East Stand (or to please their sponsors, The Cumberland Building Society Stand) which was a normal, large all seater stand which the hardy bunch of Millwall fans were placed in at the corner. Behind the other goal was a stand, a little like Morecambe’s Car Wash stand with no cover and terracing only which I was told is not normally open but was open today for kids. Then down the other side of the pitch was another strange stand, but a stand I liked as it had both terracing and seating, something I hadnt seen since Germany. Also cobbled into this stand was the directors area and boxes. The atmosphere needed to be great to cheer Carlisle on in their must win game and it was great and also credit to the stadium DJ who played some great tunes before the game such as Madness and “Welcome to the Jungle”.

When the game kicked off, I had to admit, amongst the 8900 or so Carlisle fans I must have been one of the few who did not believe they could do it as I just felt Millwall would be too strong or Brighton and Northampton could get the point(s) they needed to stay up. However with an increasing attachment to Carlisle as a place (hopefully my missus won’t read that!) I secretly wanted them to stay up and it became clear early on that either Millwall were not up for this game or they could not care less as several times, Carlisle players skipped past half-hearted challenges or none at all from the team in orange. Carlisle needed an early goal and they got it when the ball was cut back to Graham Kavanagh (who along with Ian Harte I had looked forward seeing) was told to shoot by the Carlisle fans, he did and his shot rocketed into the top corner with Millwall goalie David Forde given no chance. The dream was on! Carlisle though had lost 6 points in two months by conceding late goals and so it was felt by all the Carlisle needed to get a 2nd. They had their chances in the 1st half with Dobie and Anyinsah going close. The 1st half came to a close and currently Carlisle were safe and Brighton the team dropping to League 2. A long 45 minutes to go though. 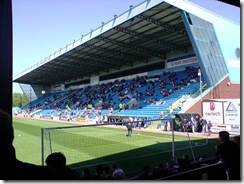 The 2nd half started with Millwall bringing on Jason Price who looked tall and was causing the Carlisle defence problems, however Carlisle broke and when the ball fell to Paul Thirlwell who hit it on the volley I first thought, “why has he wasted that!?” The ball flew straight in, 2-0. Carlisle fans could now really start to believe, especially as news broke through that Leeds had taken the lead against Northampton. The 2nd goal though seemed to wake Millwall up, only 50 minutes into the match who then started to get more of the ball and pushed Carlisle back as they began to get nervous. Millwall created many chances, Gary Alexander first hit the bar with a header with a well worked move and then Jason Price also had a great chance before Graham Kavanagh nearly sliced the ball into his own net after clearing a low cross. The 2nd half was one of the most tense games I can remember with the time ticking slowly down as Carlisle just needed to hang on. Millwall’s best chance came on the 88th minute when a low cross found Nadjim Abdou who just needed to pass the ball in, however he passed the ball wide and it was clear that Millwall were not going to score. 5 minutes of injury time were called which by this time loads of chavs had decided to stand on the line at the edge of the pitch ready for a pitch invasion, they ignored the announcer's pleas to keep off the pitch and when Carlisle won a corner late on, they charged onto the pitch early. When the final whistle was blown, Carlisle had done it! Cue a proper pitch invasion and a mass police presence around Millwall to stop any real nawtyness going on. Me and the girlfriend wandered down onto the Brunton Park pitch to take a couple of pictures which was nice. 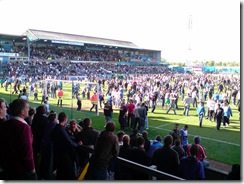 So Carlisle had stayed up! At the expense of Northampton Town who will be playing in League Two next season, also a small well done to Exeter City who were promoted to League One today, despite the two times I had seen them this season they hadn’t been very good but all the best to them. (A blog report from St James Park will come this summer) Millwall I dont think cared particularly much as they now have the play-offs to look forward/dread to. They play their old chums Leeds in the semi-final (unlucky the police on duty for that game!) while the other semi-final will be between MK Dons and Scunthorpe. The overall day out had been tense but a good ground and two great goals and a good old fashion pitch invasion had lead to a good day. I’m sure I’ll be back to watch Carlisle at some point again, although hopefully it won’t be a relegation decider anytime soon.

It also was my last game for 2008/2009, a season for me which started in the sun watching Exeter beat Accrington Stanley had finished on the Brunton Park pitch with 2009/2010 to look forward to, although the small matter of Hearts trying to secure a Europa League spot and exams will keep me busy until the next season. I will write some season overview sometime next week and a final round-up of what happened to all the teams I had witnessed this season when their seasons end. Hopefully 2009/2010 will see me get to more great games and more great grounds. Well done Carlisle!

Photos from Carlisle Utd vs Millwall

- Match: 7/10 (the game itself was average, but it was so tense and two great goals)

- Ground: 7/10 (decent ground which has character and many stories)

- Atmosphere: 8/10 (Carlisle fans got right behind their team, Millwall took 500 which was decent enough for a game that didnt matter for them)

- Referee: Neil Swarbrick – 5/10 (a lot of pulling back of players went unnoticed) 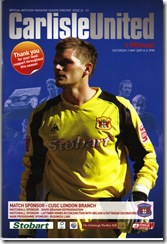