Earlier in the year (my 1st game of 2011 in fact) I watched the Royal Marines dispatch Witheridge and reach the Throgmorton Cup Quarter-Finals. (The SWP League Cup competition) They were drawn against the winners of Teignmouth vs St Blazey who’s tie was postponed on the 3rd Jan and to be played at a later date. For some reason that rearranged game was now more than a month later and with Teignmouth not yet visited by myself – the game was too interesting to miss. 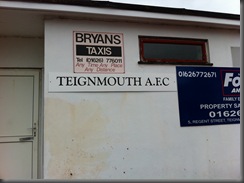 Teignmouth is a small town in South Devon situated on the North bank of the estuary mouth of the River Teign. In 1690, it was the last place (currently) in England to be invaded by a foreign power – although they probably took one look around and hopped back on their ships! (I’m joking Teignmouth) It grew into a popular Georgian period seaside resort and grew even further through the opening of the South Devon Railway in 1846. Being a costal town, its main industry through the ages has been fishing with its Quay still in use today and an RNLI Lifeboat Station opened in 1990 still there too. Famously, Teignmouth is also the origins of rock band Muse whose members, Matt Bellamy, Christopher Wolstenholme and Dominic Howard, lived there and attended Teignmouth Community College. They even performed two special gigs called “A Seaside Rendezvous” in September 2009 just before they toured around the globe with their “Resistance Tour”. Below is a “sound of Teignmouth” to wop on while reading this – get a taste for the South Devon life. 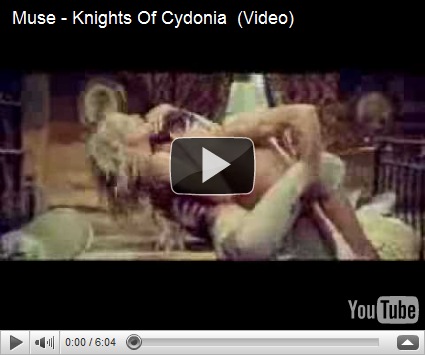 The town’s football team, do struggle as they are competing against a very popular rugby union team in the town and easy to get to Football League clubs at Exeter and Torquay. That being said, Teignmouth AFC still are a decent outfit and after finishing 11th last season (out of 18) in Southwest Peninsula Division 1 East, they are riding high up in 6th last season and only 10 points off top. (With games in hand over some teams around them). Their ground Coombe Valley is a smashing little venue cut into a valley which gives excellent views of the residential side of Teignmouth above it. Spectator facilities are limited, but this just adds to the homely feel of the ground. Behind one goal is a covered standing area with the tea bar in there too – the tea bar was also selling videos it appeared?! Then running down half of one side of the pitch was an open standing area which because of the staggered steps meant, you could get a very good view on the top of this, which is where some Blazey fans stood for the game. Being steps you could also sit here, although the rain put many people off that for this game. 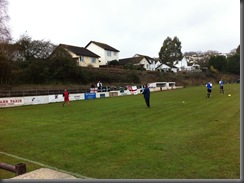 I had seen St Blazey earlier in the season, when they let slip a 2-0 lead at Buckland Athletic to lose 2-3 which could have serious implications in the race for the Championship at the end of the season. Since then, they crashed out the FA Vase after a 2-1 3rd Round defeat to Wessex League side Bemerton Heath Harlequins and have only played two league games since then a draw and a win over rock bottom Wadebridge Town. This left them in 12th in the SWP Premier – but they have played the least games in the league and have a massive 9 games in hand over other teams such as 6th place Penzance. More worryingly for the Cornish side is that possible cash problems for St Blazey have meant their playing budget has been slashed considerably meaning that players were probably free to leave and other playing constraints put on the management team headed up by Glynn Hooper. So far only 1 player has left, Sam Cooper to Liskeard Athletic which shows how close this group of players are to the Blazey and hopefully they can pull through. 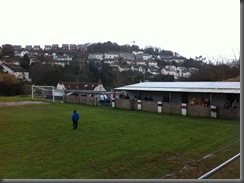 With a cash crisis, coming to a ground with an awful pitch (an admission made by the Teignmouth management when I was in the clubhouse) and being the favourites this could have been a very painful and embarrassing day for the club, but from kick-off they put in a backs against the wall performance and took the game to Teignmouth instantly. They should have been 1 up within three minutes when a St Blazey striker put a 1 on 1 chance wide of the goal. Despite that miss, they kept going and had nearly all of the possession. They did finally take the lead on 12 minutes, albeit by a fluke. An excellent throughball put Josh Higman through on the right and he curled a ball in that looked far too near the goalie to be any danger. However the ball sailed over Nicky Moyse and nestled into the side of the net. 0-1. If I’m being critical then Moyse should really have dealt better with the cross but Blazey deserved this early lead. Instead of collapsing, Teignmouth then just went gun-ho and should have had an instant equalizer when a rebound pinballed around the box but the finishing touch could not be applied. Then the home side had a shot cleared off the line from a corner, but the St Blazey brake nearly caught the home side out, but a striker dithering over the ball cost him the chance. Teignmouth kept going though and only two excellent saves from Blazey goalie Tom Blackler kept it at 0-1 firstly from a free-kick and then another missed 1 on 1 chance. Towards the end of the half came a major talking point when Blackler rushed out of his area and beat a Teignmouth striker to the ball and clearing the ball out the ground. When I then looked back at Blackler after I was guilty of ball watching he was in the floor with Blazey players angry at the challenge that had been made on him. As I said, I didn’t see it so can’t comment, but the Blazey fans around me were adamant that it should have been a red (the striker was awarded no card at all) and Blackler was lucky to still be able to walk. Blackler carried on, albeit limping and unable to take goal kicks and this must have angered Blazey to go up and score again which they did right on half time as Teignmouth couldn’t clear a corner, despite having several attempts to do so and Josh Higman fired home a rebound to make it 0-2. A scoreline a few minutes earlier seemed unlikely. 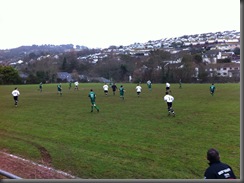 The 2nd half began with basically the opposite of what we had all just seen, with Blazey well on top. They had a shot cleared off the line straight from kick-off as they rampaged forward, before Moyse made an excellent save to keep it at 0-2. Teignmouth needed something and they got it on 57 minutes. An excellent run was halted outside the box which they were given a free kick for and while Ian Wilkinson’s free-kick was on target, it wasn’t well struck but Blackler managed to let the ball squirm underneath him and roll over the line to get the home side back in it. The game was turning into a cracker and both sides were now having decent spells of possession in trying to find the killer goal or the equalizer. When Blazey broke down the right, a run was ended abruptly in the box and Blazey had a penalty, although when the lino had his flag up for offside presumably, that penalty looked in doubt but referee (correctly) over-ruled him and the penalty was given. It got worse when Scott Baxter shouted “You f**king c**t” which the ref overheard and promptly sent him off. (He stood near me after getting s/off when he told Teignmouth officials what had happened) After all of this mess, Chris Reski kept his nerve and fired St Blazey to a 3-1 lead. Teignmouth came straight back into it and only 2 minutes later pulled a goal back when Blazey couldn’t clear a free-kick and finally Alex Blackburn fired home. Teignmouth properly went for it now and should have equalized to send the game into Extra-time when some excellent work down the right found a Teigny striker all alone in the area and he blasted over from around 6 yards. It wasn’t as bad as this beauty from Marlon de Jesus, but getting there. After this scare, Blazey then kept ball for most of the remainder of the game to take the sting out of it, but we still had time for a 2nd red card, for Blazey’s Danny Zalick seeing a 2nd yellow for getting in the way of a free kick (it was kicked at him) in injury time. Teignmouth couldn’t create a final golden chance though and St Blazey were the ones through to face the Royal Marines, just. 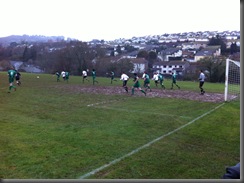 This was a cracking game, my best so far this season as both teams played some good football with a blood and thunder attitude. St Blazey didn’t deserve to win in 90 minutes, but they took their chances and Teignmouth didn’t. I would have happily watched another 30 mins of extra-time in this game but sadly I’ll probably get lumbered with it at some 0-0 borefest in the future. Coombe Valley is a smashing little ground, another favourite this season and every member of the Teignmouth committee I spoke to were extremely friendly and happy to help. Go visit! St Blazey were well supported as usual and can look forward to a QF at Cullompton Rangers against the Navy’s finest at the end of February.

Photos from Teignmouth vs St Blazey 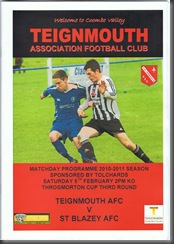