Back in summer of 2011, when Livingston announced they were to leave their current home at Almondvale Stadium at the end of the season, this prompted a rush from the collective of group of hoppers (what is the collective noun?) to try and get to here before the ground was to be apparently sold to Tesco. Since then, the news or updates seem to have gone quiet, but I had pencilled in to go up at this time since the summer, so it was off up north, way north to see if the Livi Lions could roar. 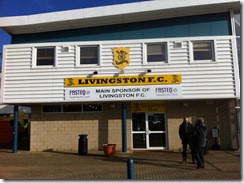 Livingston is a town in West Lothian and is the fourth post-WWII new town to be built in Scotland, designated in 1962. It is situated between Edinburgh and Glasgow, and is bordered by the towns of Broxburn to the northeast and Bathgate to the northwest. Livingston is the biggest town in West Lothian and was built around a collection of small villages such as, Livingston Village, Bellsquarry and Livingston Station (now part of Deans). The area around Livingston was previously an important Shale Oil area the world's first oil boom occurred, in West Lothian. This was based on oil extracted from shale, and by 1870 over 3 million tons of shale were being mined each year in the area around Livingston. Output declined with the discovery of liquid oil reserves around the world in the early 1900s, but shale mining only finally ceased in 1962. 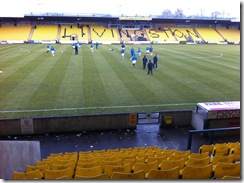 To describe Livingston as the MK Dons of Scotland would be harsh but the similarities are there. Founded in 1943 as Ferranti Amateurs they were a works team of the Ferranti engineering company and played in the Edinburgh FA's Amateur Second Division. In 1948 the club became known as Ferranti Thistle and competed in the Edinburgh and District Welfare Association before moving to senior football in 1953, by joining the East of Scotland League. Their big break came in 1974 with the demise of Third Lanark and the opening of a new position in the Scottish Football League. They won the vote against Inverness Thistle to get membership into the SFL, but had to drop the Ferranti from their name and move away from the classic City Park ground in Edinburgh. Moving into the Meadowbank Stadium they won promotion to the 1st Division in 1983 but were relegated back in 1985. They always seemed to struggle though and when facing financial difficulties in 1995, they moved out of Edinburgh to nearby Livingston and took another name change. 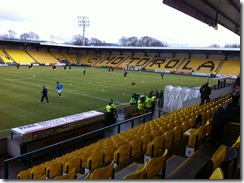 The new Livi Lions roared up the leagues with this change as 3rd Division was won in 1996, 2nd Division won in 1999 and promotion to the Scottish Premier League was secured in 2001. More amazingly in their first season in the SPL, they deservedly took 3rd place and a spot in the UEFA Cup. In the UEFA Cup they dispatched FC Vaduz on away goals before crashing out to Strum Graz 8-6 on aggregate. After this they slumped in the league and narrowly avoided relegation but did give all Hearts fans an almighty laugh when they pumped Hibs in the League Cup final in 2004 with a 2-0 win. Financial problems came around again and they landed in administration in 2004 before finally being relegated in 2006. Then came the toxic Massone period when they came close to being liquidated completely until Massone finally sold the club. It was sort of too late though as they were forced to play from the 3rd Division and proceeded to gain promotion twice to return to the 1st Division for this season. The new board have made some bold decisions too as they surprisingly sacked manager Gary Bollan earlier in February and in the week running up to this game, announced that ex Hibees John Hughes and John Collins would be starting the Manager/Director of Football dream team.

While trying to get the good times back at Almondvale, there is the question mark of how long Livingston have at the ground that has only been around since 1995. Livi rent the ground from West Lothian Council who clearly can’t be bothered or have the money for it’s upkeep as it is already looking aged. Four stands of the same height, decked out in bright yellow seats with good enough leg room, Almondvale can be a great place to watch football with a bit of TLC. Instead the West Stand where I sat is quite full of litter and stickers telling me that this is season ticket holder’s seat from God knows when. It’s a shame but if Livi do move then Almondvale is set to become a supermarket. Get here while you can then. Coming here for this game was a team managed by an ex Hearts legend in John McGlynn and Raith Rovers. The Kirkcaldy side have struggled this season as the playing budget has been cut and so league position is a poor one with Raith being down in 8th, only 3 points off bottom side Ayr United. Livi on the other hand were in comfy midtable in 5th, although the 12 points behind leaders Ross County probably means my bet for Livi to go up this season wasn’t happening. The opening spells of the game were interesting for me. This was my first time watching SFL football rather than the dizzy heights of the SPL. Livi boss John Hughes had said before hand that his side would keep the ball on the floor and pass it around and they did that although occasionally tried to pass too quickly and gave the ball away. Raith’s best chance early on came from a corner when ex Jambo Joe Hamill’s ball caused problems but Iain Davidson or Grant Murray couldn’t get there. Livingston took the lead though on 17 minutes to open the game up completely. Bobby Barr took the ball in midfield and played a 1-2 with Scougall to be put through on goal. His shot was saved by David McGurn but it came out to Kyle Jacobs on the edge of the area. His low shot took a massive deflection and gave McGurn no chance for the 1st goal of the Hughes era. Livingston now took the game to Raith as the Kirkcaldy side looked completely inept at dealing with the hordes of attacks. Kyle’s brother Keaghan had a shot over the bar before Jason’s Talbot’s cross found Marc McNulty in the area with loads of space… but he fired well over. Raith looked delighted to be only 1-0 down at HT! 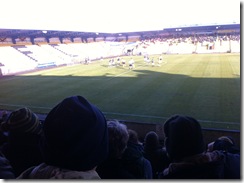 Raith nearly perfected a smash and grab right at the start of the half as John Baird had a header that flew over before Livingston made it 2-0. Scougall pushed forward again and took some Raith defenders with him when he started approaching the box. This allowed McNulty some space on the edge of the area to fire past McGurn when the ball was played to him. That was it now for Raith as an attacking force as the rest of the game was played at their end. Keaghan Jacobs smashed a shot off the bar before Kyle Jacobs somehow managed to not poke the ball home from that and then McNulty and Barr combined to set Keaghan up again but McGurn saved well. Goal #3 on 60 minutes was fantastic. Raith managed to win a corner which didn’t even beat the first man. From this, Livi pushed forward with Keaghan Jacobs and Barr playing a good 1-2 with each other. Barr with space then fired across goal for McNulty for an easy tap in. A Raith corner to a Livi goal within about 15 seconds of each other. Brilliant. McNulty had time to complete his hat-trick as he skipped past Iain Davidson on the edge of the area to be clean through before Davidson took him out for a penalty and Davidson to receive a straight red. McNulty fired his penalty home before being subbed to a standing ovation as Livingston cruised home for the final 20 minutes. More goals were there if they wanted them, but Raith kept them at bay for only 4. 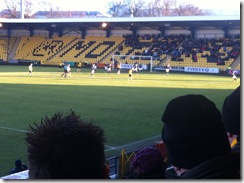 A quote from John Hughes once said, “if you aren’t smiling then you can get your boots and piss off.” Livingston under Hughes will probably be an attractive team to watch once they stop nail down the slick passing as some better sides would have taken advantage of the loose balls early on. I don’t like Hughes as he’s a Hibee tosser but we’ll see how far he takes Livingston. Raith on the other hand were shocking much to the disgust of around c.300 Raith fans who made the trip. Since this game, Raith have won 2 on the bounce after a narrow defeat to Hamilton by seeing off Partick Thistle and Morton, while Livi have lost 3 on the trot since this easy win, including two defeats to Ayr, which takes some doing. Livi were a friendly club and will most likely be playing in this league next season, but who knows what the future holds for Almondvale?

Photos from Livingston vs Raith Rovers

- Value for money: 4/10 (don’t worry England, Scotland is overpriced too) 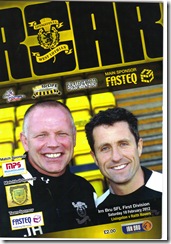