After seeing two poor games previously, the final game of my Easter treble was a game that I didn’t really feel up for anyway. It was a case of let’s get out of the house and find a game on in London, but amazingly there were very few I fancied. In the end, I plumped for an early KO game so I could go back early and revise (because I’m a party animal) for the rest of the day. Therefore on a miserable Easter Monday, it was time to head down to Heathrow to take in a rare Southern League game at Ashford Town (Middx). 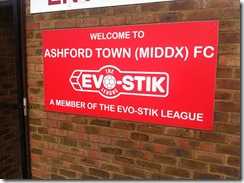 Ashford, in Middlesex is a town almost entirely in Surrey but with a small part falling within Greater London. It is often referred to as Ashford, Middlesex to distinguish it from the larger town of Ashford, Kent, because it fell within the historic county of Middlesex. Since 1965, when Middlesex County Council was dissolved, it has been part of Surrey and the small London section part of the London Borough of Hounslow. The settlement was most likely founded in Saxon time although Bronze Age artifacts have been found in Ashford and a henge may have been present then. Today, Ashford is associated with Staines, its nearest neighbour although a large amount of the employment is directly related to nearby Heathrow Airport or BP. For a town of reasonably small size, it’s list of famous people originating there is quite large with Bobby Davro, Roger Johnson and even Russell Grant amongst others from there. 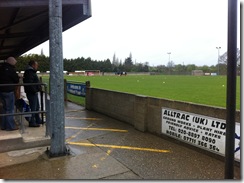 The town’s football side, Ashford Town (Middx) were only established after the war in 1958 as Ashford Albion, kicking off in the Hounslow & District League with two consecutive promotions to reach the Premier League of the H&DL. In 1964 they changed their name to Ashford Town and adopted their still current colours of tangerine and white before joining the Surrey Intermediate League in ‘67. They finally won this league in 1975 before becoming founding members of the Surrey County Premier League in 1982. During their time in the SCPL, they finally achieved their aim of having a ground of their own (which I’ll come back to later) and after spending some time in the Combined Counties League, they joined the Isthmian League in 2000 and achieved promotion to Division 2 in their first season. After being placed in the newly created Division 1 of the Ryman League they then joined the Southern League in 2004 before promotion to the Southern Premier came in 2006 but they were then relegated in 2010 and rejected a reprieve to play in the Southern League Central Division where they still are for this season. 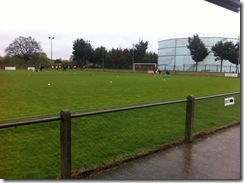 The Robert Parker Stadium (named after former their Chairman) is a ground nestled near Heathrow Terminal 4 and also situated right next to Heathrow’s fuel depot. It’s a normal Level 8 venue which has suffered the silly rules of ground grading with two pieces of cover running down one side of the pitch and a seated stand directly opposite. There is a small two/three step terrace behind one goal with nothing behind the other one (in the picture above). I actually found the ground slightly depressing being a bit of a dump and a place you would never go back to, however this feeling may have been exacerbated by the awful weather but in the interests of fairness, I’ve added comments below from an Ashford Town committee member when I described the ground on the Non League Matters forum:

“We've been there for 25 years, but when the club moved in it was basically an open field. The clubhouse was built by volunteers and originally the site was shared with the cricket and hockey clubs across the road - there is still an old scorebox on what used to be the cricket pitch.

In defence of our "miserable place", there are a few factors that limit us in terms of making the most of the ground. One is the fact we're in the Green Belt, which means we can't tarmac the car park and, when the seats were installed they had to be blue, rather than tangerine, as tangerine seats "would not be in aesthetically appropriate for the Green Belt". The fact that we play in tangerine and our ground should be part of our identity was lost on the "powers that be" Being in the Green Belt also makes it difficult to get planning permission for even essential improvements. If you walked around the ground, as many hoppers do, you'll have noticed that the Tank End is basically a pathway. The reason for that is that the only way we could get planning permission for the floodlights was to move the pitch nine metres towards the Fuel Plant - a shift that will limit our future ambitions (not that we have any sort of plan to be in the Football League in seven years or anything daft like that...). The stands are of a similar design (aesthetics, as demanded by the Council again) although the covered terrace was once a smaller, brick built shelter and the Main Stand does at least provide a decent view of the game, unlike so many of those pre-built stands you see everywhere.

I do appreciate that, on a horrible, wet day like yesterday, the ground can seem quite bleak and isn't helped by the lack of cover behind the goals (see above). However, I sometimes wonder what the definition of "character" is where grounds are concerned. Sometimes, it's not in crumbling buildings or an ancient stand but in something a a little less tangible, like the fact that the ground is named after someone who chaired the club for 28 years and was instrumental in its development and that, not only is that person still alive, but made the freshly filled rolls on sale behind the bar.”

So make your own mind up if visiting the Robert Parker Stadium! (I can’t disagree with the friendly welcome you will get) 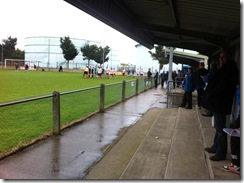 Another reason for this game being picked is that it had something riding on it. Ashford were sat in midtable (10th) in no danger of troubling the playoffs or relegation positions but the visitors were right up poo creek. Fleet Town were going into this game down in 21st place and 6 points from safety with 20th place Aylesbury the team to catch. With 5 games (including this one) to go, it was squeaky bum time for the Fleet as they tried to make the gap up and save what had been an awful season. For Ashford, it was time to try out new things most likely as their slow start had cost them what their decent end of season run had deserved. 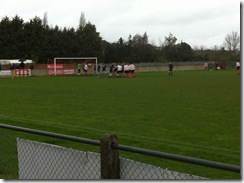 I’m always concerned about watching Southern League games as they can normally be dire (exhibit A) with little effort. So it was pleasing to see both sides try and play a little bit in the early stages, although the miserable conditions did make that tough at times. Fleet Town did begin to make the mark on the game however and start to dictate play. They almost had the lead in the middle of the half when Gareth Byers crashed a header off the bar as Fleet began to sense an opening goal. They also had a few chances that were blocked through last ditch tackles or even by their own teammates as the away side were looking good. So of course what happened is they went 0-1 down. A daft free-kick was given away right on the edge of the area which Mark Bitmead fired in. While that was cleared off the line it fell to Scott Weight who basically got in the way of the ball to divert it past Ryan Pryce to give Ashford a completely undeserved lead at HT. 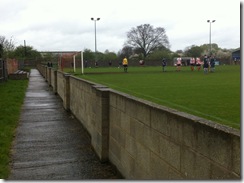 Fleet needed a quick equalizer and they nailed it within a minute of the 2nd half. Some slick passing play down the left saw a cross whipped in and Mark Watkins was on hand to finish off well to give Fleet the deserved equalizer. The game then sort of descended into Southern League-itis as it turned crap for a wee while as both sides decided if they wanted to push on for the win in case they lost a point. Fleet went for it first but again their shots were being blocked well before Paul McCarthy even had to make a save (can’t remember him making a proper one). It was always going to inevitable then when the game was heading towards a draw, Fleet Town would snatch defeat, again and push them further to the drop. A counter attack down Fleet’s right saw Kofi Lockhart-Adams hit a shot that was brilliantly saved by Pryce but while his defender just ball watched, Samad Kazi tapped in to make it 2-1. I thought Pryce was actually going to punch his defender in the face, such was his anger at him and some really piss poor defending from the rebound. Fleet now really had to go for it, or face some top notch Wessex League football next season. So in injury time, with Fleet camped in Ashford’s half, the home side broke and Kazi finished off with his 2nd and end Fleet’s chances of getting anything. 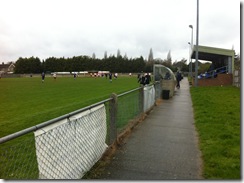 Fleet were right up against it now and it was no surprise that in their next game against eventual Southern League Central Champions, St Neots, the 1-0 defeat consigned them to relegation. In fact they only picked up 1 more point until the end of the season to leave them 12 points off safety at the end of the season. Yet, before they start getting their maps out to look for directions to Hayling United, reprieves from other clubs going bust, etc may yet save them. Ashford Town (Middx) ended the season in 9th, 10 points off the play-offs which suggests they could be up there next season. It’s doubtful I’ll be back here which is a shame as they are lovely off the pitch but I just felt the place was a bit grim. Good luck to them next season, I may see them on the road somewhere. At least I saw one decent game over Easter, stunned it came in the Southern League though! 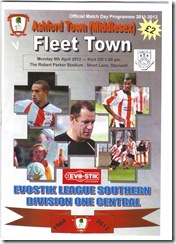 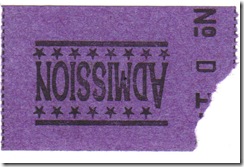