With the pre-season friendly time of year, some can look actually quite appealing to go to. Combine that with another story behind the friendly, say a transfer clause between the two clubs or maybe in memory of somebody then that friendly becomes even more appealing. Enter then East Devon side Ottery St Mary. A team I had seen last season were 100 years old in 2011 and to celebrate this and add a game to this, they invited nearby Exeter City to send a team over for this “Centenary game”. I was there. 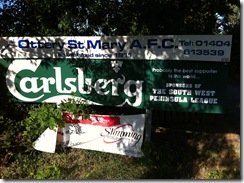 Ottery St Mary is is a town in the East Devon district, on the River Otter, about ten miles east of Exeter. The place-name 'Ottery St Mary' is first attested in the Domesday Book of 1086, where it appears as 'Otri' and 'Otrei'. The town takes its name from the river Otter on which it stands, the river taking its name from the animal. The 'St Mary' element refers to the fact that the town belonged to the church of St Mary in Rouen in 1086. The town typically stages annual events around Guy Fawkes Night when, in a tradition dating from the 17th century, barrels soaked in tar are set alight and carried aloft through parts of the town by residents. 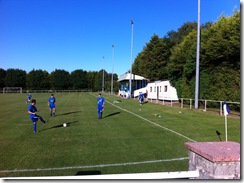 The town’s football club play on the Northern edge of the place in a large complex which seems to be all for football. The main pitch at Washbrook Meadows is actually a decent ground due to their old Western League days. Railed off all the way round and a good raised standing area next to the clubhouse in the corner, means you can get a decent view whereever you stand here. If you can’t stand (or just can’t be bothered) there is a seated stand (see pic above) straddled right on the half way line. It is thought that the stand was built in the 1920’s and bought second hand from Withycombe Rugby Club in Exmouth. Along with the stand, the Otters have a rich history stretching back from their founding in 1911. The furthest up they have been in the pyramid system came firstly in 1989/90 when the Otters won the Western League 1st Division and were promoted to the Premier before dropping back down to the Devon League in 1994/95. Their last success of any note was their Throgmorton Cup win that season. 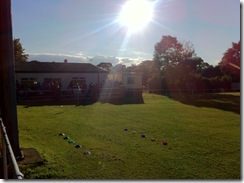 Those days in the Western League however seem a long long time ago now as last season, down in the Southwest Peninsula League Division 1 East, the Otters slumped to a poor 13th place in that league. (Out of 16!) I also saw them once last season as the league’s worst defence were torn apart again by Exmouth Town who cruised to a 4-1 win. This season has seen a load of new players being brought in and a new manager who is Dave Weeks. If you watched the U-17s World Cup in Mexico over the summer, you may recognize Weeks as he was a part of the England coaching side that got to the Quarter-Finals. (The Otters actually warmed up in England kits for this game – excellent work from Weeks if he’s claimed some kits for Ottery) 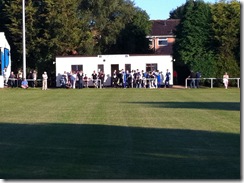 They welcomed an Exeter City XI to this game which was made up entirely of the youth team. While this would have annoyed or disappointed some people, I was fully expecting it and quite happy to watch some up and coming players who could be playing in the Football League in a couple of seasons time. And, I had no knowledge of any of these players so was hoping that the quality would be good. Fair play to a good amount of Exeter fans too, as I had a rough count of 212 people who attended this game, with probably around 60% of them supporting Exeter. Hopefully a good amount of money was brought in for the Otters. 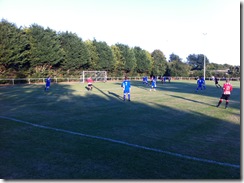 As for the game, it was men against boys. With the boys easily on top. In the 1st half, Ottery rarely attacked apart from in the first minute when Exeter’s left back, Jacob Wannell was caught well out of position but the chance came to nothing. The youth side only needed 5 minutes to take the lead when some excellent play down the left led to a cutback which found Jamie Micklewright who sidefooted past Matt Slark in the Otters goal. The Exeter side’s attacking strengths were too much for the Otters as when they won a free kick on the edge of the area, Jamie Reid rifled the ball into the bottom corner on 13 minutes and all 212 (roughly) people in the ground knew that the game was pretty much over. Exeter Youth though were using this as great preparation and so continued to attack attack attack. And were rewarded with a 3rd on 20 minutes when a great through ball put a striker on 1 on 1 and as Slark ran out, he completely took out the Exeter striker and it was a penalty. (No card was given – but if it was a competitive game, then it was probably only a yellow) Micklewright stepped up and easily dispatched the penalty to make it 3-0. There were no other goals in the 1st half, but that wasn’t for the lack of trying as Exeter played some really good stuff and deserved a lot more than 3. Jacob Cane alone hit the post twice as the Otters were just ripped apart. 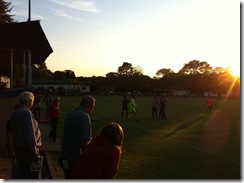 The start of the 2nd half saw Ottery actually manage some attacks on the Exeter goal but goalie Jake Viney was more than comfortable with what was fired at him as Martin Loader had the best chance for the home side. It wasn’t long until the Ex XI started back up again though and before long it was one way traffic, albeit with slightly less intensity as the 1st half. They still scored another two goals though, firstly on 70 minutes when a ball from the left found its way to the back post where Jamie Reid volleyed straight in for a top finish. Two minutes later it was number 5 as Slark saved a long range effort but only spilled it out where Matt Grimes lashed home to complete the scoring. 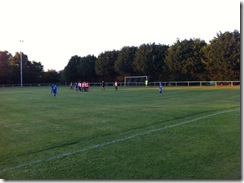 A top evening of football as the Otters can still be proud of celebrating 100 years of football and forget about the 5-0 defeat in this game. Exeter Youth have some top players that could be making an appearance at a Football League game soon enough. Jacob Cane and Jamie Reid were the two that impressed me so good luck to them in their careers. Another pleasing aspect from the Exeter side was the lack of gob and constant questioning of the referee apart from Jacob Wannell who needed to keep his mouth shut. Although he was just frustrated at his poor performance. The Otters could finish slightly higher this time out and with a manager who seems to encourage good play rather than being a dictator (their old manager) they could have a decent season.

- Value for money: 8/10 (good on Ottery for not overcharging)

- Programme: 7/10 (was free and had enough information – sorted) 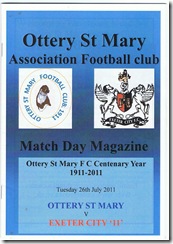