Regulars to my blog may have noticed for a while on the “Upcoming games” section that Nov 27th was a “Plymouth Double!” And that was indeed the plan right up until I woke up that morning and even the South-west had succumbed to Mr Frost and Mrs Snow. There were no confirmations about Plymouth Arygle Youth and Vospers Oak Villa being on or off yet I didn’t fancy a 60+ mile trip to be wasted. Therefore Camelford’s game looked the best bet until that was also called off. That left me with just South Devon to aim for and so I took the long drive down to Newton Abbot for Buckland Athletic vs St Blazey. 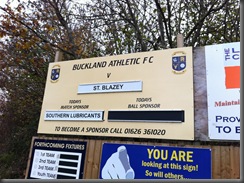 Newton Abbot is a market town in South Devon and probably best known for its racecourse situated slightly outside of the town. Its growth can be put down to during the Victorian ages as the South Devon Railway built its works here and this is why Newton Abbot is a major station in the South-west. As well as the racecourse other landmarks include St Leonard’s Tower, GWR Museum and Ye Olde Cider Bar – apparently one of only two remaining cider houses in the UK. Sadly though I was driving and so no cider for me! The drive was quite a nightmare, partly down to me being a dick and driving towards Camelford for the first 20 minutes of the journey before realising where I was meant to be going and headed South. Just outside Newton Abbot, a big mention to the tosser in the tractor that cut me up on a roundabout and then proceeded to cause a 2 mile tailback as he was limited to 15mph. 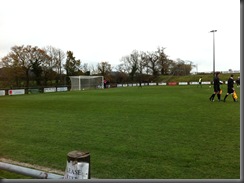 I arrived at Homers Heath bang on 2:30 and proceeded to get a Budweiser and Cheeseburger for a decent price before going out and taking a few snaps. Homers Heath is dominated by the large stand which combines both a standing area and seating area which both offer great views. The rest of the ground is surprisingly uncovered hard standing, however the car park runs down one side of the pitch so if you were there early enough, you could just sit in your car and watch the game. A special note to the clubhouse too, a lottery funded building and it was fantastic. Fully decked out in Christmas decor (slightly early?) and with ample space, Buckland’s clubhouse will probably be a shoe-in for “Clubhouse of the Season award”. Its the least a successful team deserve as Buckland won a historical double last season by winning the SWP League Premier Division and the SWP League Cup (Throgmorton Cup). This season has been a little more problematic as Steve Massey was sacked as coach as a “differing of opinion” and early exits in the FA Cup and Vase means its back to the League. They went into this game top of the league with a point and game advantage over 2nd place Plymouth Parkway. 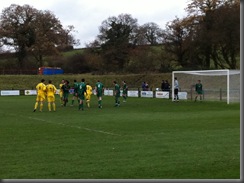 The visitors from Cornwall for this game were lower down the table as St Blazey were a surprisingly low 12th (out of 20) but a comfortable 14 points ahead of bottom side Wadebridge Town. Their ground had sadly taken a recent battering from Mother Nature however as the half of the pitch at Blaise Park was underwater for a substantial time, could be a while before St Blazey have another home game, especially now the snow has come to have some fun. St Blazey are one of the best away travellers in the league and this game at the reigning champions was no exception as a decent number had made the journey decked out with flags too. As the game kicked off they held their own too as Buckland were lacking a final product to really trouble the Blazey back four and goalie. You wondered what damage Blazey could do if they went on the attack and we got an outstanding answer on 17 minutes as X placed a wonderful, curling shot up and over the goalie into the top corner from well outside the area as Blazey took the lead. Buckland should have hit back instantly however when a player burst through one on one with the goalie but as he slid his shot past Tom Blackler, he also put it past the post. Much to the delight of the Blazey fans. After this, the away team were more than happy to let Buckland have the ball as their final ball was again woeful and they could hit them on the break. This is exactly what happened on 28 minutes when a counter attack saw the ball fed to Y on the edge of the area and he cracked a low shot which Buckland’s goalie should have dealt with, but he didn’t and Blazey led 0-2! Again Buckland could have pulled a goal back straight from the kickoff but Antony Lynch fired his shot wide. At half-time you felt that if Buckland got one back, they’d go on to win. 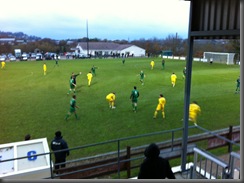 Sensing this, they came out and absolutely battered Blazey in the hope of turning this game around. Even Blazey’s counter attack looked hopeless as their midfield could not win the ball off the waves of Buckland players pushing forward. On 55 minutes, Buckland fired a warning shot as a low drive from outside the area cracked the post. Sadly, just 3 minutes later Blazey clearly hadn’t taken much notice as mayhem ensued from a corner and Blazey goalie Blackler dropped the ball at Lynch’s feet and Buckland had a goal back. You sensed the game was turning now and Buckland got that equalizer on 67 minutes by countering Blazey’s counter attack. A throughball released Buckland’s left winger and his ball found Lynch in the area all alone as he had time to guide his diving header into the bottom corner and you felt there would only be one winner now. That killer goal came just 6 minutes later as another throughball down the left looked to be heading for the same outcome with only one Blazey defender in the box and Lynch behind him. When the low cross came in, Mamsey Sabo had to do something, sadly he could only direct the ball past his own goalie as Buckland completed the comeback. The scoring might not have finished there as in the last minute, Blazey felt unlucky not to be awarded a penalty but the Champions had hung on. 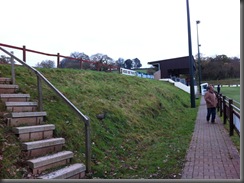 Firstly sorry for the delay in this post, I’ve had a busy week! This game was quite easily the best game I’d seen so far this season. Some excellent attacking football and it never boiled over despite having the air of a grudge match about it, so the players deserve credit for that. It was also an even better day for Buckland as their nearest challengers Plymouth Parkway and Ivybridge Town both lost at home, so the Bucks have a 4 point lead now. Excellent day out here, fantastic club and game and while some people were struggling to see any match at all, I go and watch a cracker!

- Atmosphere: 9/10 (Blazey and Buckland fans got right into it)

- Food: 7/10 (really nice cheeseburger and a wide selection of sweets) 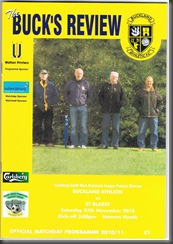