Maybe because I’m a nutter, but I fancied a trip to the seaside. I hardly went in the summer months (if at all) when the weather was great and so I had planned this game for a fair while as Western League vs SWP League games are always intriguing and this was hopefully no exception. Despite it being monsoon weather in the week leading up to the game, on the Saturday morning it was bright and sunny and so I let the “train take the strain” and headed towards Dawlish. 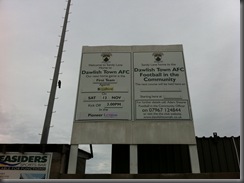 Dawlish is a small seaside resort in South Devon which has grown from humble beginnings as a fishing port to one of the more popular destinations on the English Riviera. Part of this growth is down to Victorian “celebrities” using Dawlish as a place to stay such as Charles Dickens and Jane Austin. In fact, Nicholas Nickleby was said to be born here in Dickens’ novel about him. Today, Dawlish is only really known for its beach and the Riviera Line which runs through (and stops at) Dawlish which is located right next to the coast. It costs National Rail millions to upkeep this part of the line as the tide batters it everyday and so sea erosion is a major problem. There is also a small resort further North up the coast called Dawlish Warren which is situated at the mouth of the Exe Estuary and is caravan heaven. 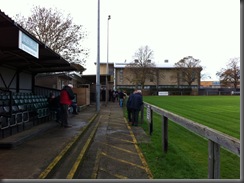 The town’s major football team (Dawlish United actually play a couple of minutes up the road on a basic pitch) are the most Southern team in the Western League based deep in SWP League territory. In fact they are running low on local league rivals with only Willand Rovers and Wellington (and to a certain extent Barnstaple and Ilfracombe) close by. Dawlish Town’s recent history has all been in the Western League when they joined in 1973-74 and have stayed there since. During the late 80’s they also played some glamorous friendly matches against QPR, Aberdeen and Chelsea who all visited Sandy Lane. In 2004 they were dealt a massive blow when their old wooden stand was burnt down by fire and had to be replaced by the arena-type as shown in the picture above on the left. They have had recent good seasons in the Western Premier finishing 2nd in 2007/08 and 3rd the next season. After a 10th place finish last time out, they were going into this game 12th in the league (out of 19), although they were a whole 16 points ahead of bottom club Wellington who look good to be playing Western Division 1 football next season. 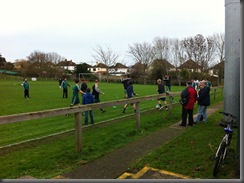 In terms of Western League grounds I’d been to, Sandy Lane was a fairly basic ground with a covered standing area and the arena-type stand on one side of the pitch which is where the entrance was too. The rest of the ground was uncovered hard standing all the way round which was railed off by nice wooden posts which blended into the ground. Behind the dugouts on that side was a raised area and grass banking that probably provided some excellent views, however after the recent weather, I didn’t fancy standing on them. The visitors for this game were one of the SWP League’s brightest teams in Bodmin Town. Despite not winning the Premier Division last season (that honour went to Buckland Athletic) they are still seen as a very good team who should probably be playing higher than they should. Bodmin is fairly near to me and so will maybe get a visit soon. They had entered this competition at the 2nd Qualifying Round and already dispatched of Launceston and Sherborne to get to Round 2, whereas Dawlish were entering at this stage. 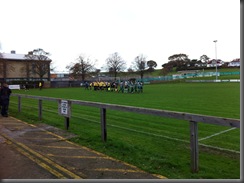 The game kicked off and Bodmin showed their intent straight away as they launched a long ball down the right for one of their speedy wingers to pick up and whip a good cross in but it was cleared. The game was still open and 11 minutes in Dawlish should have scored when the away side’s offside trap was brutally sliced open but the Bodmin goalie Kevin Miller saved well. While this was a Devon vs Cornwall grudge match, the spicy tackles had been few and far between until the 27th minute. When Bodmin’s Chris Luxton flew into a shocking two footed tackle on a Dawlish player, the home player lashed out by kicking Luxton in the face it appeared. Unsurprisingly the caused a mass brawl and when the referee stepped in, he handed out only a yellow card to each of the offenders. The Bodmin Town boss went absolutely ballistic at this and was lucky not be sent off, as he clearly had overlooked the fact that Luxton was still lucky to be on the pitch following the awful challenge. Dawlish had another 1 on 1 chance at the end of the half but again were thwarted by the impressive Miller. 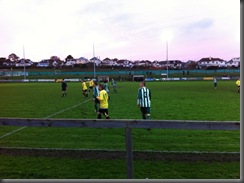 As the game went on into the 2nd half this looked like another 0-0 and a mid-week replay in Cornwall. On 51 minutes, the ref made a double poor decision as Luxton controlled a ball in the box with his hand before being brought down which looked a clear penalty but neither offense was given as Bodmin began to turn the screw. We finally had a goal though on 56 minutes when a Bodmin corner was not cleared and the ball fell to Sam Matthews about 3 yards out and he fired in to give the away side the lead. From this point onwards Dawlish never looked like scoring and it was no surprise when Bodmin got their 2nd when it was Dawlish’s turn to play the piss-poor offside trap and a long ball sent Luxton through and he had a moment of absolute brilliance as he lofted the ball over the advancing keeper nonchalantly to all but guarantee Bodmin’s place in the 3rd Round. While Dawlish huffed and puffted, Matthews nearly got a 3rd for Bodmin but his close range effort was fantastically saved by Fisher in the home net. At full-time it was a deserved win for Bodmin and they march on. 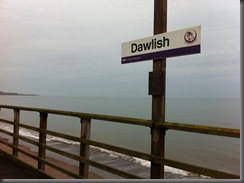 A great day out in this sea-side town as I saw a decent match as well! Bodmin Town will travel to fellow SWP League side Plymouth Parkway in the 3rd Round which looks to be a cracking tie. Dawlish can now concentrate on the league although it looks quite certain they’ll just be floating around in mid-table now for the remainder of 2010/11. One final note, the Western League has room for more teams and clearly needs some new blood. Whoever does win the SWP Premier this season, I really hope they make the step up as this performance showed that they could easily perform against teams at this level and West Country football would improve as a result of it! 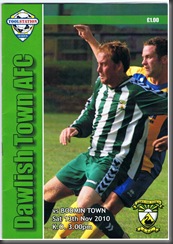 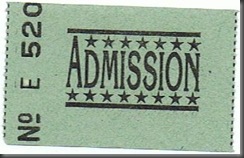