People can sometimes slate social networking sites such as Facebook and Twitter but if you use them in a positive way then you can gain a lot of out it. Through Twitter, I’ve met some of the various hoppers and general football fans out there and it was some Chelsea lads who got me a ticket for a reasonable price by borrowing a season ticket for this game so I could finally get to Stamford Bridge! I’ll be honest from the start, I have a soft spot for Chelsea, dating way back to the late 90’s when Zola, Vialli, Di Matteo and Poyet were all in the side that occasionally won a cup. Needless to say, I was looking forward to this. 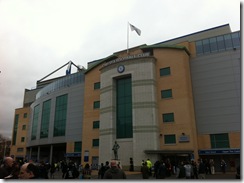 Chelsea is an area of West London bounded to the south by the River Thames, where its frontage runs from Chelsea Bridge along the Chelsea Embankment, Cheyne Walk, Lots Road and Chelsea Harbour. The word Chelsea originates from the Old English term for "landing place [on the river] for chalk or limestone.” By 1694, Chelsea – always a popular location for the wealthy, and once described as "a village of palaces" – had a population of 3,000. Even so, Chelsea remained rural and served London to the east as a market garden, a trade that continued until the 19th-century development boom which caused the district finally to be absorbed into the metropolis. The street crossing that was known as "Little Chelsea", Park Walk, linked Fulham Road to King's Road and continued to the Thames and local ferry down Lover's Lane, renamed "Milmans Street" in the 18th century. Chelsea's modern reputation as a centre of innovation and influence originated in a period during the 19th century, when the area became a Victorian artists' colony. It became prominent once again as one of the centres of 1960s "Swinging London", when house prices were lower than in the staid Royal Borough of Kensington. The Swinging Sixties was defined on King's Road, which runs the length of the area. 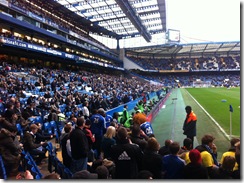 Founded in 1905, Chelsea have represented the swinging and trendy area of London well (although Stamford Bridge is actually in Fulham) since their election to the Football League soon after 1905. They soon became known as a club for signing big name players and entertaining the crowds, but not much success came their way in the early years. After the war Ted Drake became manager and his modernisation of the club, led the Blues to their first league championship (in 1955) and a challenge for honours throughout the 60’s (now led by Tommy Docherty and later Dave Sexton). The next two decades were poor for Chelsea as troubles on and off the pitch began to emerge. The team were relegated to Division 2 and nearly dropped into D3 for the first time in 1982. There was also a hooligan element amongst the support which plagued the club throughout this period, during a time when football hooliganism was rife anyway. Ken Bates then bought the club in the early 80’s for £1 and began to slowly build the club up again, although their form in the newly created Premier League was poor until Dutch legend Ruud Gullit took over as player-manager and the trophies (and big name players) started to arrive. In 2003, the club then changed again, dramatically when Russian billionaire Roman Abramovich took over and spent that summer buying everybody. I remember coming home from school everyday just to see who Chelsea had signed as they gorged over £100 million on new talent. No trophies came however until The Special One arrived…

Love him or hate him Jose Mourinho changed football in this country, and in my eyes, for the better. His impact (positive or negative) is a debate for another day but his record at Chelsea was superb. Two Premiership titles, 1 FA Cup and two League Cups means Mourinho is Chelsea’s most successful manager. Since his days however, the Stamford Bridge club have never looked like replicating his success after he’d gone in 2007, although Ancelotti did win the double in 2009. Current boss Andre Villas-Boas is in his 1st season and is under pressure after a less than successful start that has seen the Manchester clubs fly away and even Tottenham have seemed to have leapfrogged them as Chelsea were coming into this game in 4th. Aston Villa also have new blood in charge this season with ex Hibs boss Alex McLeish taking over. Villa had started reasonably well, albeit defensively, but a shocking run of form has seen them tumble down the table to 14th and McLeish needs to turn this around quickly otherwise he would be on for a second successive relegation. Villa did have some hope for this game though as their recent form against Chelsea was good and had recently taken part in some crackers at Stamford Bridge with a 3-3 draw, a 7-1 defeat that famous 4-4 draw back in 2007. 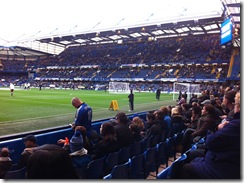 Sat in the Shed End behind the goal, you get some excellent views of Stamford Bridge – although the classic fans would probably want to see The Shed back to terracing. (maybe one day!) Chelsea started reasonably ok as well I though as it was no surprise Villa had set their stall out defensively and looked for the pace of Agbonlahor and N’Zogbia to hit them on the counter attack. The home side though created chances, firstly Mata (who Chelsea always looked to for anything) was unlucky when he tried a flick on that went wide and then Daniel Sturridge fired over after some good work down the right. Chelsea had clearly spotted a weakness in Villa’s left back position with Steven Warnock struggling to contain the home side at times. In fact when Chelsea took the lead on 23 minutes you had to think it would be a long afternoon for Villa if they were just going to play counter-attacking football. Ref Mark Halsey let Chelsea play on after a foul in the middle of the park and Ramires bombed forward while Villa backtracked to lay the ball off to Sturridge. He was fouled off the ball as he came forward but Halsey played on again to allow Drogba to run into the box where he was cynically taken out by Richard Dunne. Clear cut penalty. Drogba himself got up and dispatched it to equal Peter Osgood’s 150 goals for the club and he pointed to the penalty spot where Osgood’s ashes were scattered. A nice touch. Villa though, actually went for it and with Steven Ireland starting to boss the midfield, they were level soon after. He sent N’Zogbia away down the left and he skipped past a bizarre tackle/block/not anything from Paulo Ferreira to cut it back to Ireland. His first shot was blocked on the line by Terry but he coolly slotted home the rebound to make it 1-1. Chelsea were frustrated and for the rest of the half played like it. 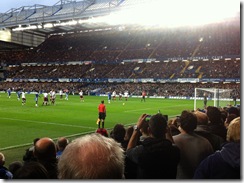 The second half saw Villa pinned back for the majority of the play, but never really looked in too much danger apart from a couple of scary moments. In fact, it wouldn’t be unfair to suggest they were comfortable on occasions. Mata nearly ended this right before it started when he fired a cross/shot along the face of the goal but nobody was there to fire home. Villa though, showed they could still attack when some neat passing on halfway sent Agbonlahor through but his glorious 1 on 1 chance was well saved by Cech. This woke Chelsea up, they needed to get back in front in this game and fast. Lampard came on to the delight of the crowd and started to get the ball around quicker and then Torres came on as well as Chelsea went for it. Torres very nearly scored a wonder goal with his first touches as on the edge of the area, he skipped away from a tackle before unleashing a shot which cannoned off the bar with Brad Guzan completely beaten. Drogba then had an excellent chance on 73 minutes when Lampard put him through, but he rushed his shot and in the end dragged it wide. The last 10 minutes belonged to Villa, firstly McLeish signalled his intentions by bringing Darren Bent on and the England striker should have won a penalty when Terry brought him down in the area. The ball wasn’t really cleared and so when Clarke’s through ball cut straight down Chelsea’s defence, Stiliyan Petrov had time to pass the ball away from Cech and into the bottom corner. Amazingly Villa led and with 4 minutes to go, they added a 3rd. Lampard for reasons beyond me tried a square ball across the halfway line which Steven Ireland gobbled up and ran clear, along came Bent who had an easy tap in to end the game there and allow Villa to take the 3 points back to Birmingham. 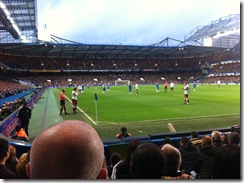 This was not good from Chelsea and they knew it. Some of the pressure (maybe a minimal amount) came off Villas-Boas as Lampard turned hero in their next game when he scored a 89th minute winner to beat Wolves while Villa were back to normal, crashing 2-0 at home to Swansea. Chelsea need a lot of work on the side to bring them near the Manchester clubs and challenge for the title again. Their 2-1 win earlier in the season over Citeh, shows there is some quality there though and once Villas-Boas makes his mark on the team, they will be back up there, although it remains to be seen if AVB will get the time he needs. Villa can look forward to a midtable finish this season under McLeish and nothing more. Glad to have finally got to Stamford Bridge and thanks to Yasser on Twitter for the ticket while he was away! I do aim to go back again, hopefully to see a Chelsea side in their swagger rather that in transition.

Photos from Chelsea vs Aston Villa 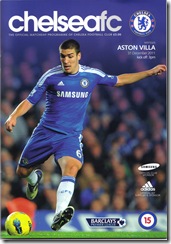