While it will be just over two weeks till my next game (hopefully a report coming from the home of football) another feature I have decided to throw into this blog is to take a classic look back at some of the classic players that I have witnessed play over the years.

The rules are simple:

- I must have seen this player play live at some point

- Made some impact into the game(s) I have seen them.

Therefore, it was easy to pick the first one. I give you, Bruno Labbadia. (pictured playing for Arminia Bielefeld) 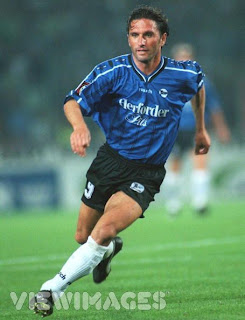 While Bruno did not score the very first goal I witnessed live (that goes to fellow Arminia player Jorg Bode - http://en.wikipedia.org/wiki/Jörg_Bode) I saw him play 9 times, and scored 8 goals, thus having a great 0.89 goal per game ratio when I viewed him. Labbadia had also played for most of Germany’s top clubs including Hamberg, Kaiserlautern, Bayern Munich and Werder Bremen before joining Bielefeld in Summer 1998 and finished top scorer for club and in 2.Bundesliga with 28 goals that season. What I always found amazing with Labbadia was that his work rate was not the best, in fact he would frequently become anonymous during games yet always popped up with the ability to score vital goals at vital times. After leaving Bielefeld in 2001 he joined Karlsruhe where ironically I watched him play a final time, away at Vfl Bochum in the 2001/2002 season.

He is now manager of top flight club Bayer Leverkusen, having been there since the start of the season and his team currently sits in 5th place, still in the hunt for the Bundesliga title. So it may appear that one of Germany’s great strikers of the 1990’s (only got 2 international caps!?) is making the transition to a top class manager too.