By February every season, all the leagues and cup competitions are coming to the “business end” when there will be winners and losers. In the league fans will be wondering if their team can continue their promotion push or will end up losing their battle against the drop. In the cup competitions, especially the FA National ones, regionalisation has gone and so it can throw up some very tasty ties. Down in Cornwall was one such tie as SWPL side Torpoint Athletic were trying to reach the QFs for the first time in their history against Northern League crack side Billingham Synthonia. Having got some cheap rail tickets to nearby Plymouth, it was off to see if Torpoint could make history. 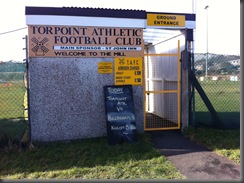 Torpoint is a small town on the Rame Peninsula directly opposite Plymouth on the River Tamar. It is unusual in the fact that Torpoint is a planned town having been commissioned in the 18th Century. The presence of Devonport Dockyard on the other side of the Tamar and HMS Raleigh located on the Western side of Torpoint has also increased its population and importance. One noteworthy person who was born in Torpoint is John Langdon Down who later described the condition now referred to as Down syndrome. I’ll be honest, the reason I had left Torpoint for so long is because its an absolute bastard to get to from North Devon. I had heard great things about the club and once this FA Vase tie had been drawn, I bit the bullet and planned a trip. Getting some cheap advance rail tickets to Plymouth, then getting a bus to Torpoint (going via the Torpoint Ferry) and arriving at the ground in good time. 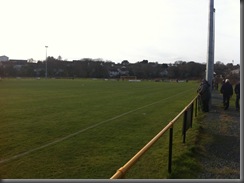 Torpoint’s ground The Mill is the complete opposite to what I’d seen last week at Teignmouth. The actual ground is very spacious yet can still provide good viewing points from any part of the ground. One seated stand right on the half-way line was completely full by the time I came out of the clubhouse. Next to that stand is an area of covered standing that was also being put to good use while the rest of the ground was uncovered, hard/grass standing. The clubhouse is slightly detached from the pitch but is still quite nice and after witnessing Rooney’s “shinner” goal vs Man City I was right up for a good game of football. Torpoint to get to this stage of the competition have had a rollercoaster ride right from their first game in the Preliminary Round. After a routine 3-0 away win over Wadebridge Town, they cruised through the 1st Round with a 4-1 win over Western League side Radstock Town. Then in the 2nd Round started the craziness. 0-2 down away to Bristol Manor Farm, they ended up winning 7-3 to reach Round 3. There, they beat Wessex League side Verwood Town 5-2, again behind. Before in the last round they again pulled a win from the mouth of defeat with a 3-2 win over West Midlands League side Bloxwich United. This was the furthest that Torpoint had ever been in the competition equalling their best run since 1995/96 when they reached the 5th Round before a 2-0 defeat to UCL side Raunds Town ended their run. Considering this was only their 8th ever FA Vase campaign, to reach this stage again is a great achievement. 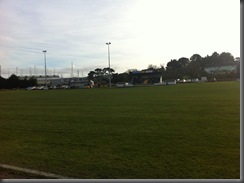 I had a chat with the Torpoint Chairman Paul Whitworth (a great guy and someone you can follow on Twitter here) who thought that the game would be a close one and a tough one to call. The opposition had travelled some distance as its a nice 380 mile journey from Billingham in County Durham to Cornwall as the fantastically named Billingham Synthonia from the Northern League had come down to try and continue their recent good FA Vase runs. I would finally be seeing a Northern League side in action, although it was strange to hear the NE twang of accents down in Cornwall! The Northern League is regarded as one of the strongest (if not THE strongest) Step 5 League in the country and so this would be a tough game for Torpoint. Billingham Synths had dispatched of Newcastle Benfield, Bishop Auckland, Stokesley, Westfields (AET) and Tadcaster Albion to reach this stage. One positive for Torpoint was that Billingham were only down in 17th (out of 22) and 8 points off the drop zone. They did have games in hand over some teams, but not too many. As they had travelled down the previous day – they were clearly taking this game seriously and with an FA Vase QF tie to play for, a massive crowd in force – this could be some game. 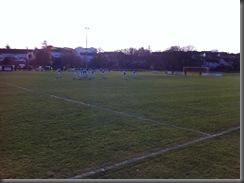 As the game kicked off, Billingham looked very comfortable on the ball up front and were not afraid to run at Torpoint and try some nice passing moves. However, at the back they showed why they were down in 17th as they looked nervous and not part of the same team that their forwards were from. This was immediately proven when an early Torpoint corner was curled into the 6 yard box and nobody got a touch on it as the ball drifted out. A let off for Billingham. They came forward often early on and looked quite decent especially on the ball. As their #11, Nathan Jameson looked like the NE tubby David Ginola. Great on the ball, but once too often tried a little trick that ended up going wrong and Torpoint could clear. He had forced a great save from ‘Point goalie Martin Piper before the hosts went up the other end and scored. Billingham switched off from a throw in on the right and Josh Grant took the ball to just outside the penalty area and has low shot rolled just past Josh Moody and into the far corner of the net. 1-0! Billingham as you would have expected came right back into the game and Piper again needed to be on top form to deny crosses from Billingham getting into dangerous areas and a shot from Chris Burton. Right on HT though, Torpoint were denied a blatant penalty after good work down the right from a winger was ended with a crude challenge and although most of the 400+ crowd saw it, the referee played on. Quite incredible as it really was quite blatant. 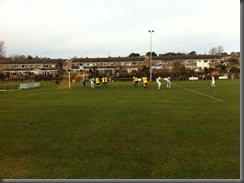 For the 2nd half I switched to the other side of the pitch and stood near the goal that Billingham were going to be attacking thinking that most of the action was going to be taking place here as the Cornish Alamo was about to happen. In the end, I was wrong. Billingham did attack yes but Torpoint’s defence dealt with pretty much everything that the NE side could throw at them. On the rare occasions that Billingham got past this brick wall, Piper again was on hand to make the save or smother the ball from a cross. The only real save that Piper had to make (from memory) was a header late on from Abel. It was actually Torpoint who kept the majority of the ball late on as the confidence seemed to seep out of Billingham every minute ticking down to the final whistle. Adam Carter could have wrapped up the tense cup tie in injury time as he burst into the box but his powerful drive just went wide. In the end, Torpoint more than managed to hang on and were through to the QFs for the very first time. 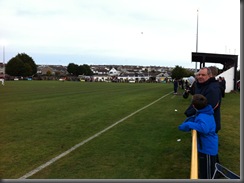 As I left the ground I quickly congratulated Paul on his side’s excellent achievement before letting the team and the proper fans (not these one dayers like myself! ;) ) begin their celebrations. I watched as I saw one of the most heart-warming sights I’d ever seen in football as the team came of the field to a guard of celebration from officials, fans and the like. This little Cornish team were now in the Last 8 of a national FA competition, not only breaking new ground for themselves but for the Southwest Peninsula League who had never had a team reach this far since their formation in 2007. As for Billingham, I dunno. They clearly didn’t perform on the day and can’t really argue about the result. As the Northern League have had superiority over this competition for a while (the last two winners) it could be a new winner this season. (Or it could be Whitley Bay, again). Torpoint in the QFs have a toughie, away at Wessex League side Poole Town who are too good to be playing in the Wessex League but until this season had been denied promotion because of their ground. Now a ground-share has been decided, Poole should be in the Southern League next season and therefore FA Trophy land. Can Torpoint carry on this amazing run? Who knows…

Photos from Torpoint vs Billingham Synths

- Ground: 7/10 (I like it, hopefully one day will play host to higher level football)

- Referee: R Ganfield – 3/10 (schoolteacher approach doesn’t work when you get it wrong) 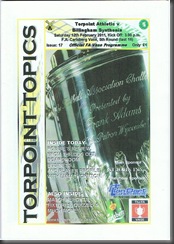 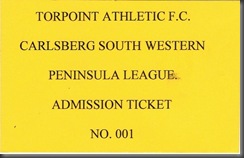