Shangri-La, definition: “any earthly paradise but particularly a mythical Himalayan utopia — a permanently happy land, isolated from the outside world.” 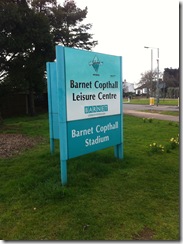 Kentish Town is an area of north west London in the London Borough of Camden. The most widely accepted explanation of the name of Kentish Town is that it derived from 'Ken-ditch' meaning the 'bed of a waterway'. Kentish Town was originally a settlement along the River Fleet which flowed through the area and by 1456 Kentish Town was recognised as a thriving hamlet. The early 19th century brought modernisation, causing much of the area's rural charm such as the River Fleet and the 18th century buildings to vanish, although pockets still remain. Between the availability of public transport to it from London, and its urbanisation, it was a popular resort. Five tube or railway stations still remain in the area today and others such as South Kentish Town tube station have been closed. Kentish Town was to see further modernisation in the post-World War II period. However, the residential parts of Kentish Town, dating back to the mid-19th century have survived and are much admired architecturally. In more recent years the area has become noted as leading the trend for the resurgence of back-to-basics, real ale pubs like the CAMRA award-winning Southampton Arms, the Pineapple, and Tapping the Admiral. Kentish Town is also home to The Forum (formerly known as the Town and Country club), for many years well into the 1950s one of Kentish Town's most popular and comfortable cinemas, and now a popular live music venue. Go check out The Kentishtowner for more info on what is coming up in the area. 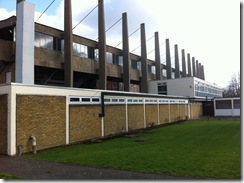 Despite all that, Kentish Town FC are currently playing around 7 miles away in Barnet at the Copthall Stadium, currently being shared with Shaftesbury Barnet Harriers (can you guess what type of ground it is!?) The club were originally founded in 1994 as a youth football club by parents who were concerned at the lack of football in the area for these players. They started the 1995 season in the Camden & Islington Youth Midweek League and plodded along there until they joined the senior football ranks (presumably when these youth players grew too old to continue at that level) in 2003, joining the Spartan South Midland League 2nd Division. They were promoted that season too, despite only finishing 10th out of 16 and progressed along nicely in the 1st Division until 2007/08 when they won that and promotion up to the SSML Premier. They were in this top flight until last season when they finished rock bottom and were back in the 1st Division. They have always been a nomadic club since their inception too as have played at 5 different grounds since 2003, playing at the Barnet Copthall since 2007. This season has been a struggle however as they have never really got going and now find themselves in another relegation battle being down in 20th place, but 11 points above seemingly doomed Sun Postal Sports. 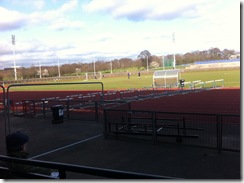 Their time at the Copthall is now seemingly doomed too (and a major reason why I was in a rush to finally see a game here) as evil rugby club Saracens have had their bid to redevelop the ground for a capacity of 10,000 accepted by Barnet Borough Council and so work will probably start on the ground extremely soon once approval has come from the Secretary of State. The “Copthall Revival” website has some nice spin on what Saracens hope to achieve with the ground as well as pictures on what they hope it looks like. Looks good, just a shame it will be hosting such a dire sport. The future for Kentish Town FC is clear from the Revival site, none. Not one mention on the website about their future and best clarified with the sentence, “The stadium, currently home to Shaftesbury Barnet Harriers, is proposed to become an international level athletics venue as well as being an outstanding community sports hub and Premiership rugby ground.” KT have apparently bought some land elsewhere with a youth team that they can hopefully work on and call it their home, whether or not this is true and even if it is, they have the funds to develop this land and continue to play at this level remains to be seen. The Copthall in its current state is a tired looking ground, one massive main stand dominates the place (and the only area where you are actually allowed to sit for KTFC games) while there are randomly placed temporary seating stands dotted around the ground which would provide varying levels of viewing quality. The main stand itself actually provides a good view of the game, considering there is an 8 track running ring around the pitch which normally destroys any sort of viewing of football at athletics grounds. 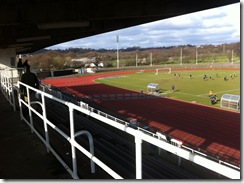 With KTFC’s days here numbered, there aren’t too many more opportunities this season to see them here, and who knows where they will start 2012/13 at. This game, they welcomed midtable side Wodson Park, who I actually knew nothing about until this game. Based in Ware, Hertfordshire, they share with Ware FC (poet and I know it, etc) who’s ground is named Wodson Park. With their website not being updated since February 2011, it is hard to say much about them. What I do know is they were founded in 1997 and first played at the Wodson Park Recreation Centre until 2009 when their share at Ware (I’ll stop it now) began. By then, Wodson Park had entered the SSML at Division 2 and won promotion up to where they are now in 2010. A reasonable sized club at this level with a current average attendance of 44 this season, however Kentish Town are not the best supported club sadly (average attendance of 24, very doubtful 26 were here for this game) and the sparse attendance was confirmed to me when the home committee asked the away fans if they were the only lot, “yes it’s just us” they replied. There were 2 of them. 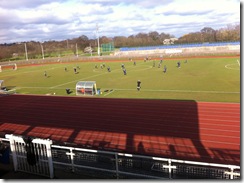 While the game kicked off in really bright sunshine, Wodson Park were keen to slowly control the play at their own pace until they saw the Kentish Town defence were in kamikaze mode and promptly took the lead with only 6 minutes played. A counter attack saw Wodson Park break down the right which Kentish desperately argued was offside, debatable, a cross to the back post found Danny Burke all alone who had the easy task of beating home goalie Elias Farah. KT’s defence was really a shambles at times as Wodson Park threatened on several occasions to steal the ball from the back four to create an easy chance for themselves. They had just got away with it and looked slightly back in the game when they fell 0-2 down. A controversial corner was awarded (it wasn’t a corner) and before it came in, I thought to myself, would be spicy if Wodson scored from this. They did. Ball came in and it hit a home defender on the arm. You know what’s coming. Up stepped Robbie Green to crash his penalty home. The rest of the half saw KT doing well from the occasional counter attack they produced, which gave me hope for the 2nd half as they could possibly come back into the match. 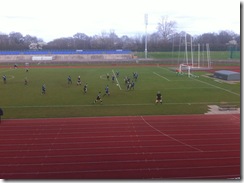 In fact, Wodson Park stepped it up a gear for the 2nd half and Farah had to make an excellent save to keep out a volley from the 6 yard box after some excellent build up play. Kentish Town had a player called “Mikey” (he wasn’t listed in the programme and their site isn’t updated) who had been the most vocal and frankly, the most talented KT player on the pitch. He did seem to have an extremely hot head though as he had already dived into tackles before he gave away the 2nd penalty and the last chance KTFC had. As Wodson broke into the area, he launched himself and completely took out the Wodson left back who had bombed up the pitch. Cannot think I had ever seen a more blatant penalty. Robbie Green stepped up again and stuck it to his right for goal #3. Amazingly “Mikey” hadn’t been booked for that challenge and so launched himself into two other tackles that Wodson players did well not to react to. He tried it again late on but injured himself in the process as the game unsurprisingly calmed down after his substitution. Unsure how he survived a red card, but can’t fault the effort! Wodson had time to rub it in for 4-0 as Ali Waldren finished an excellent counter attack as he slipped the ball under the keeper from the left hand side of the box and it rolled in. 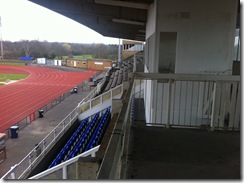 I really really wish Kentish Town were in a better shape than they actually are. The committee is one of the nicest I have spoken to and they even did bacon bagels at the game. Yet, it appears they will be homeless next season and with dwindling crowds and poor results, will they drop back out of this league to county (and complete obscurity) level? I really hope not. Considering Wodson Park don’t play at their own ground, I seriously doubt I will ever seen them in action again, but those short 90 minutes I saw a good counter attacking side that was better than their midtable position suggests. While it took 5 attempts, I finally reached Shangri-La. Until the next ground that I have multiple postponements at comes along.

- Food: 8/10 (there should be more bagels sold at football grounds)

- Programme: 4/10 (a bizarre programme with monkeys and sliding down banisters jokes) 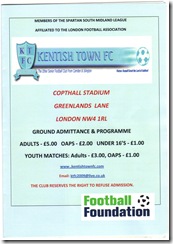