The beauty of the Easter period might be for some, having some time off or maybe eating your own weight in chocolate. For me, it’s the large amount of games scheduled at the “business end” of the season when heros and zeros are made (cliché alert!) For the start of my “Easter treble” this season, I had selected Watford’s “Family Day” for their game vs Blackpool and the offer of £10 tickets. Instead, as I fannyed around, I missed them all as it sold out and needed a Plan B. Step forward Tooting & Mitcham United who were in dire straits in the Isthmian Premier Division. What they didn’t need was a visit by promotion chasing AFC Hornchurch, but they had it and I had my Good Friday game. 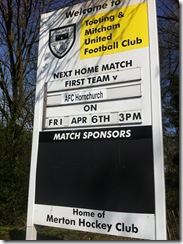 Tooting & Mitcham’s Imperial Fields ground is actually based in Mitcham which is a district in the south west of London, in the Borough of Merton. The toponym "Mitcham" is Old English in origin and believed to mean big settlement. Before the Romans, there was a Celtic settlement in the area, with evidence of a hill fort in the Pollards Hill area. The Saxon graveyard, located on the North bank of the Wandle is the largest discovered to date, and many of the finds therein are on display in the British Museum. The area is a possible location for the Battle of Merton, 871, in which King Ethelred of Wessex was either mortally wounded or killed outright. During the Elizabethan era Mitcham became gentrified and as due to the abundance of lavender fields, became renowned for its soothing air. The air also led people to settle in the area during times of plague. When industrialisation occurred, Mitcham quickly grew to become a town with paint, varnish, linoleum and firework manufacturers moving into the area. The work provided and migratory patterns eventually resulted in a doubling of the population between the years 1900 and 1910. This industry made Mitcham a target for German bombing during World War II. During this time Mitcham also returned to its agricultural roots, with Mitcham Common being farmed to help with the war effort. Today, Mitcham does feel like part of the Greater London district and still houses a large amount of people considering the area size as well as Mitcham Common which is South London’s green space. 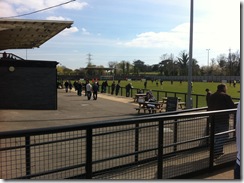 Tooting & Mitcham United were born in 1932 out of the merger of 2 clubs, Tooting FC and Mitcham Wanderers FC. They united after it became clear that the area couldn't host two competitive teams so better to unite rather than both slip into football obscurity. They started off in the London League before quickly joining the Athenian League in 1937. League form was disappointing to begin with but it was compensated for by a first win in the Surrey Senior Cup in 1938 when rivals Dulwich Hamlet were beaten 2-1 at Selhurst Park. After winning the Athenian League in 1950 and ‘56, they joined the Isthmian League and won the championship soon after. 1958-59 saw them on a swashbuckling FA Cup run as they saw off Bournemouth and Northampton Town before losing a replay in the 3rd Round to Nottingham Forest. (Who then won the cup) All of their recent history has been spent in the Isthmian League as they moved away from Sandy Lane in 2002 to their new home of Imperial Fields while they tried to move up to the Conference South from their current position. 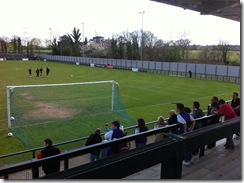 This season though had been a disaster. Despite proclaiming they would be a Football League side in 7 years, they were facing the likely conclusion of being relegated to the Isthmian 1st Division next season and being a Level 8 side. They were going into this game in 20th (out of 22) and being 11 points away from 5th bottom Leatherhead and safety. With only 6 league games remaining, it didn’t look good. Coming down from Essex were promotion chasing AFC Hornchurch to try and keep on Billericay Town’s tails. The Urchins had stuttered recently by losing 3 in 4 at the beginning of March, but were coming to Imperial Fields having won 3 in a row. Daunting. Imperial Fields is a cracking ground. With two large terraces behind each goal that provides cover and excellent views, with a grand main stand running down one side of the pitch, it is a great place and deserves football of a higher level. Before the game it was also pleasing to meet up finally with Yasser, who I know from Twitter and watched the game unfold in front of us. 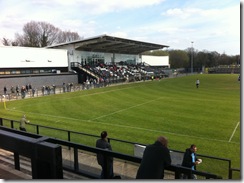 Considering how crucial this game was to the promotion and relegation battle in the Isthmian League, I was surprised how dire this started with passes rarely going to their intended target and most of the ball being seen in the scrappy midfield area. Unsurprisingly, Hornchurch made most of the early running and won a few corners that came to nothing. The first real opportunity in this game came to Lewis Smith, although he knew nothing about it as he managed to chase down a backpass to Tooting goalie Darren Behcet, whose clearance came off Smith but went narrowly wide. Behcet was kept busy for the rest of the half by having to keep out shots from Spencer, Smith and Tuohy. Right on half-time, Hornchurch almost had the lead when Lewis Smith headed a free kick into the ground and onto the bar as the Tooting goal had led a charming life for the first 45 minutes. 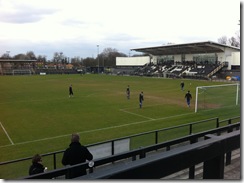 The 2nd half was again all Hornchurch as the pushed forward trying to get a goal while Billericay struggled at home to Carshalton. It really did look like it would be only a matter of time before the away side took the lead with Hayles, Anderson and Tuohy all having great chances that were either missed or just cleared away. Amazingly though as it looked like Hornchurch may have to settle for a 0-0 draw (and end my long 0-0 run), Tooting actually woke up and went on the attack. While they won a corner and it was cleared, the ball fell to Tooting winger Jerome Walker who raced away down the right and his cross was poked in by Connor French from about a yard. If Hornchurch weren’t gun ho before, they started playing 0-0-10 in trying to get back to keep the title race alive. They were almost 0-2 down as another Tooting counter was somehow kept out by Joe Woolley, although he knew nothing about it. What the Terrors didn’t need to do was switch off, but on 83 minutes they did and Hornchurch had their equalizer. Joe Anderson played Martin Tuohy (one of the league’s top scorers) down the left, he skipped past a poor tackle and had all the time in the world to slot the ball past the keeper. 7 minutes left, one goal needed. Could they do it? On 87 minutes they were awarded a penalty when Smith chased a long ball down the middle and was taken out, quite possibly on the edge of the area. Tuohy kept his nerve and gave Hornchurch the win as Tooting could barely keep possession for the last few minutes never mind create another chance. 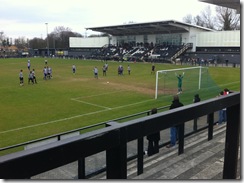 Billericay only managed a 1-1 draw with Carshalton but their 0-0 draw away at Hornchurch put them in prime position for the title which was confirmed on April 21st when the Urchins lost 1-0 away at Harrow Borough and Billericay defeated East Thurrock to send them up to Blue Square South. It’s the play-offs for Hornchurch. Tooting were put out of their misery on Easter Monday when they lost 3-0 to Carshalton as former Tooting legend Paul Vines scored a hat-trick to end their stay in the Isthmian Premier. Clearly in a bit of trouble on the pitch but we’ll see if Tooting can regroup next season at a lower level. The ground is a cracking one so I will have no hesitation of coming back here. It was also good to meet up with Yasser finally so thanks for 90 minutes of good company! 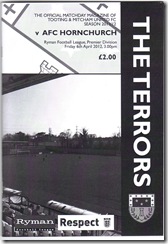