Morecambe were back in London Town and I was off to see how Jim Bentley’s revolution would do next after his and his side’s fantastic start to the season. They came into this game top of League 2 after a sensational 6-0 win over Creepy Crawley Town before a credible 1-1 midweek draw at Macclesfield to set them up for this game. There was of course some history to this game as the last time Morecambe played here was in the 2010 League 2 play-offs. They lost 6-0. 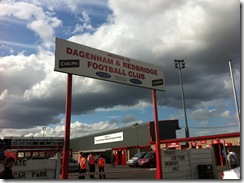 Dagenham is a big suburb in east London, forming the eastern part of the London Borough of Barking and Dagenham. It was historically an agrarian village in the county of Essex and remained mostly undeveloped until 1921 when the London County Council began construction of the large Becontree estate. The population of the area significantly increased during the 20th century, with the parish of Dagenham becoming an urban district in 1926 and a municipal borough in 1938. It has formed part of Greater London since 1965 and is a predominantly residential area, with some areas of declining industrial activity, including the Ford Dagenham plant. Vehicle assembly ceased at the plant in 2002 but it continues as a major production site with the capacity to assemble 1.4 million engines a year. In 2008 the plant produced around 1,050,000 engines and was the largest producer of Ford diesel engines globally. Employment at the plant peaked at around 40,000 workers in 1953, yet the plant currently employs around 4,000 people today. 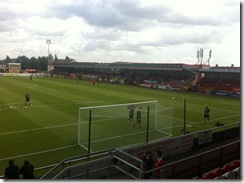 Dagenham and Redbridge’s birth technically can be traced to 1992 when they were formed out of the merger of Redbridge Forest and Dagenham FC. You can still go back even further though and take 4 old amateur clubs who make up D&R today. Ilford, Leytonstone, Walthamstow Avenue and Dagenham all have their DNA in D&R. Ilford and Leytonstone merged in 1979 before absorbing a struggling Walthamstow Avenue in 1988 to become Redbridge Forest. After Forest left their Green Pond Road ground in Walthamstow, they groundshared at Redbridge’s Victoria Road ground with a good 7th place finish in the Conference National for the 1991/92 season before the final merge to bring the latest carnation of the club. Since then, they were finally promoted to the Football League in 2007 and adapted well to League 2 finishing 20th then 8th and then in 2010 after a 7th place finish, they won the play-offs (including an absolute roasting of Morecambe) to be promoted to League 1 for the first time in their history. Unsurprisingly for such a small club, they were promptly sent straight back down last season after being mullered by Peterborough on the final day to finish 21st. Under John Still (who has been at the club since 2004) the club have always made strides under him and is rightly seen as a club legend. 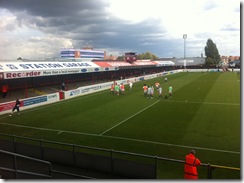 D&R were going into this game in a lowly 17th while my Morecambe boys were flying high at the top of the league after a sensational start. Considering I last watched Morecambe in League action back in March when they looked dreadful crashing at home to Macclesfield. Club legend Jim Bentley has turned it around brilliantly and were looking to avenge the unbelievable 6-0 drubbing they received here in 2010. Arriving at the ground from Dagenham East tube station, Victoria Road (or the London Borough of Barking & Dagenham Stadium) is a small tidy looking ground which is made up on a large covered terrace (picture above) named the North Stand while running around the corner flag is a small, uncovered terrace at the Bury Road End. Opposite the North Stand is two seated stands with the large Carling Stand running most of the way down the pitch while a tiny little seating area (the Family Stand) down in the corner. Away fans are situated at the back end of the ground in the seated stand there. Only 47 away fans had made the trip (which was announced during the game to ironic cheers from D&R fans – strange considering, I remember seeing them at Morecambe in January 2008 to which they brought around 20 fans) partly due to having to pay £22 for an adult ticket. This is League 2!! 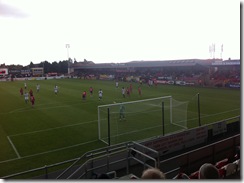 Morecambe started the brighter of the two sides and Izak Reid had the first shot in anger when he broke to the right of the area but flashed his shot/cross wide (via a deflection). Dag & Red did create chances themselves though as Roche had to save and be alert from Damien Scannell and then Sam Williams as an early goal for the home side could have seen the 6-0 fear come straight back again. After that brief spell of chances the game became very scrappy as referee D Coote became very fussy yet missing other challenges. In fact the only other chance of the half was when Morecambe had a free kick cleared off the line by Scott Doe while the rest of the half was just a scrappy stalemate. The highlight of the half was actually the torrential downpour and saw streams of D&R fans rush from the open terrace to the cover. This also led to the great photo opportunity (pic below) as a rainbow came out. £22 to watch a rainbow. Was having a wonderful time. 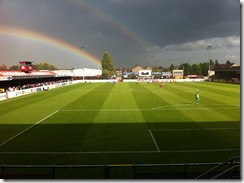 The 47 away fans (although most other fans counted at least 70) wondered if the game would get better and lo and behold, only 2 minutes in and the away team took the lead! A long ball over the top from Kevin Ellison sent Danny Carlton away and as he skipped clear of Mark Arber, he kept his cool and slotted the ball past Chris Lewington. Morecambe fans burst into song with the “6-0! Who gives a f**k!? We’re top of the league and we’re going up!!” And soon after, Carlton was put through again but this time his shot was straight at Lewington. While the D&R goalie was the hero then, it was his fault for goal #2 on 54 minutes. When a simple cross was sent into the box, Lewington for some reason only palmed the ball out to the edge of the area where Stewart Drummond was stood and he sidefooted the ball into the bottom corner and it looked nearly game over already. A few minutes later came a major talking point when Kevin Ellison was brought down in box by Richard Rose. This to me looked a clear penalty, it looked to the away fans a clear penalty and it looked to this D&R fan a clear penalty, but the referee booked him for diving. To rub it in moments later, D&R got a goal back which is probably the best goal I will see all season. Oliver Lee stepped up and whipped a brilliant cross/shot over Roche and into the top corner. Sensational, if he meant it. While Roche looked a tad silly for not reacting to it, he had no chance and D&R were back in it. The final 20 minutes were a bit of a blur as Lee just shot wide, Ellison cleared a header from Woodall off the line while Roche made some excellent saves as Morecambe held on. Just. 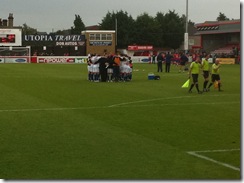 An excellent start to the season continued for Morecambe with an excellent win at Victoria Road. It was touch and go towards the end but I feel the away side did just deserve all 3 points as they were the more positive team throughout and it’s nice to see the players come and thank you at the end for your support. They actually care you’ve come down (or up in my case) for the game. Take note Hearts. Since writing this Morecambe lost 3-2 to Bristol Rovers but remain very much in the Top 3 and I hope they can stay there till May! As for D&R, now I’ve been to see their ground and setup, it makes it all the more remarkable that they achieved promotion two years ago. This is a small club overachieving in League 2 and I hope they can stop the current rot and not get dragged into a relegation battle. There are numerous other teams who I would much rather see slide into non-league oblivion and never return.

Photos from Dag & Red vs Morecambe 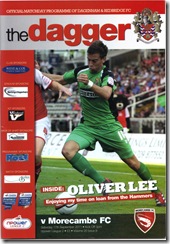 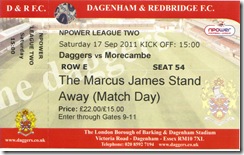