306 days. Or 43.714 weeks since I stepped onto the terraces of Blyth Spartans’ Croft Park. Now, some 38 games later after my biggest ever season it was time to wrap 2010/11 up. Now I like to pick my final game with something riding on it. In 2009 it was Carlisle United securing safety from League 1, in 2010 it was saying goodbye to Christie Park and Morecambe’s play-off dream and now for 2011 it was off to a cup final. As the majority of my games have been in Devon this season, it was fitting to round it off with Devon’s 2nd biggest county competition with the final of the Devon FA Premier Cup at Devon FA HQ, Coach Road in Newton Abbot. 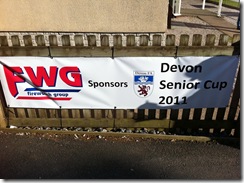 Newton Abbot is actually quite a surprising hotbed of football. If you like your grass roots stuff. Along with Coach Road, there is Homers Heath (home to Buckland Athletic) and the Recreation Ground (home to Newton Abbot Spurs) along with some smaller (even for me) South Devon League grounds around the outskirts. I had only been to one other County FA ground (Lancashire) and was wondering what Coach Road would look like having not seen any pictures before hand. I have to say, its a great wee venue in a quiet part of Newton Abbot. The main feature is the massive stand which straddles one touchline which is actually raised above the pitch so offers some great views. I reckon the stand contains around 400 seats and would not look out of place at some grounds far higher up the pyramid. The rest of the ground is railed off with standing all the way round (no cover). There is a clubhouse/bar area in one of the corners, imaginatively named The Cornerhouse Bar while behind the goal nearest the entrance is a smart looking building that presumably the Devon FA Heads sit and hand out footballing justice across the County. (I wasn’t allowed in) 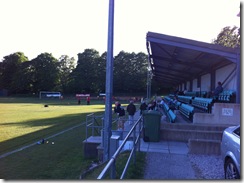 I had seen a few Devon Premier Cup ties this season and they had been a bit mix and match. From Exeter Civil Service, through University of Exeter to BOCA Seniors, this was a fairly competitive cup. Perhaps unsurprisingly the finalists were the two teams who finished highest up in the highest league possible to enter this competition, the Southwest Peninsula League Division 1 East. Liverton United who had finished top of that league and Budleigh Salterton who had finished 2nd. Both sides had not taken promotion for various reasons, which I won’t go into, again. Both sides had beaten decent opposition to get here with Liverton seeing off North Molton (4-0), Watts Blake & Bearne (3-2), Exeter Civil Service (3-2), Sidmouth Town (2-1) and winning their semi-final against Bickleigh 2-0 at Exmouth. Budleigh reached here with wins over Lee Moor (8-2), Axminster Town (5-1), Ottery St Mary (6-0), BOCA Seniors (3-1) and a 3-2 win over Galmpton United at Crediton United. In the league meetings this season, it was 1-1 at Budleigh and Liverton won 2-1 at their home game. So it was a tough game to call and I hoped it would be a fitting end to the season for me. 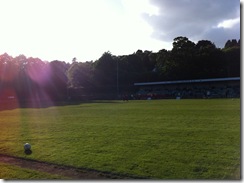 As the players walked out to the Champions League theme (no joke) we had the bollocks before every final where the players shake hands with the guests of honour that nobody has ever heard of. When the game finally kicked off (bang on time at 7pm to be fair) Liverton started the better, playing some decent football and really getting stuck into Budleigh. They should have taken the lead on 6 minutes when from a Liverton corner, defender Dan Harrity headed into the ground and over from about 7 yards out. What was worrying for Budleigh is that he had a free header and their defending from corners would have to improve rapidly. It didn’t. On 10 minutes, Budleigh couldn’t clear a corner away and the ball fell to Robbie Bowker on the left who put in a great low cross for Dan Broadway who side footed home from close range to give the League Champions the lead. And although only 10 minutes had been played, they deserved it. Liverton’s calmness on the ball was the reason why they looked so comfortable against a Budleigh side running around like headless chickens and playing pointless long balls over the top. They did nearly surprise us all with an equalizer on 27 minutes when a long range effort forced an excellent save from Liverton goalie Josh Oak. That being said, Liverton should have gone into the HT break 2 up when a Budleigh defender was robbed on the right touchline which allowed the striker to burst into the box and set up Simon Lewcock who fired over the crossbar from around 5 yards out. What a shocking miss. Budleigh were lucky to be still in the game at HT. 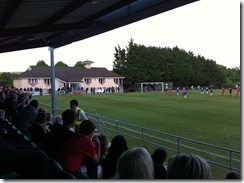 2nd half started much like the first with Liverton dominating the play again as Budleigh had just not turned up for this final. Lewcock added to his growing portfolio of shocking misses when he fired high and wide over the bar from around 8 yards this time after his first shot was blocked. Budleigh for all of this half were quite poor as long balls were just aimlessly punted forward towards their big striker Danny Williams who needs to learn the offside trap ASAP. There was only one other real chance of the half (yes the 2nd half was that bad) when a drilled shot towards the Budleigh goal was flicked on by Lewcock which hit the bar and bounced over. For the final 10 minutes I actually watched Devon FA officials bring the trophy out onto a table and then sort the various medals and stuff out as it was more exciting than watching Budleigh pump balls into the box which were instantly cleared. It was a shame to end the season on a poor game, but that’s the way the cookie crumbles sometimes. 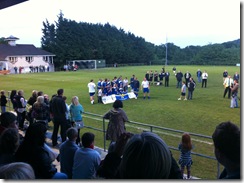 Well done to Liverton United then who easily deserved to win this cup final and take the League and Cup double home and again pip Budleigh to the post. I won’t dwell too much on this game but it was really quite poor. (Not sure if its the worst game I saw this season, still to make my mind up on that) The ground itself though at Coach Road is really worth seeing and an excellent venue to watch football on a summers day. It’s now the summer holidays for me and my blog reports (on the football side) at least as I have to prepare (and a LOT of preparation to do too, and my life in general) for 2011/12. My various season reviews and previews will be published over June/July as well as my various excited tweets when the fixture lists start coming out. I do like to end my season with a moment that really finishes it off and as I walked towards my car at Coach Road I could hear the Liverton team partaking in a round of “CHAMPIONES OLE OLE OLE!” Good luck to them next season. Now where is that cold can of Irn Bru to relax with… 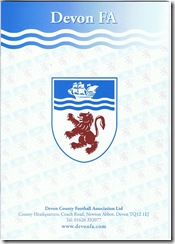