The Road to Wembley was about to begin again for the 2011/12 season on The Travelling Fan and for the 539 teams who had entered the FA Vase this season. For most teams this also started their more realistic chance of playing at Wembley this season for a crack at the FA Vase and current holders Whitley Bay. The draw this season had paired a surprisingly high amount of inter-league games across the country, but one that did stick out was Croydon’s local derby game with Beckenham Town and amazingly, they play in different Level 9 leagues, despite only being 3 miles apart. The road started here. 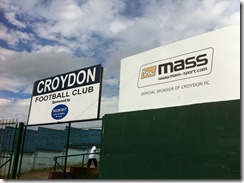 Croydon is a town in South London, located within the London Borough of Croydon to which it gives its name. The area is identified in the London Plan as one of 11 metropolitan centres in Greater London. Croydon is located on the natural transport corridor between London and England's south coast and historically part of Surrey. Croydon expanded during the Middle Ages as a market town and a centre for charcoal production, leather tanning and brewing. The Surrey Iron Railway from Croydon to Wandsworth opened in 1803 and was the world's first public horse-drawn railway, which later developed into an important means of transport – facilitating Croydon's growth as a commuter town for the City of London and beyond. By the early 20th century, Croydon was an important industrial area but by the mid 20th century these sectors were replaced by retailing and service economy. Croydon was recently on the news sadly as the riots really hit home in this area as scumbags looted local shops and even damaged the local Tramlink services as the copper wire was stolen. Croydon though has recovered and moved on. 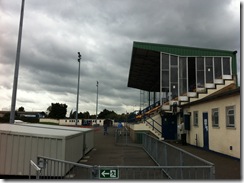 Croydon FC were founded in 1953 as Croydon Amateurs (and so are older than Croydon’s “other” club, Croydon Athletic who I will get to another day) and were ex members of the Isthmian League before losing their place in 2006 as part of a non-league reshuffle. (Ironically, Athletic are now in the Isthmian League). They currently play in the Combined Counties League Premier Division, although only just, after finishing last season in 20th place. They probably aren’t helped by their current ground, which is the vast Croydon Sports Arena which you can see from pictures is an Athletics ground. Located on the edge of the South Norwood Country Park, Croydon Arena is home to the Croydon Harriers and features an 8 lane 400m track, a centre field for throwing events and a training area for the athletes of the future. But does this sound like a football venue? No. Spectators for football are positioned so far away from the pitch, you actually fail to appreciate the 388 seater stand (picture above) or on the other side of the ground, 3 good pieces of standing cover which at most other grounds would be an excellent place to stand, but not here. This is probably a great place to come and watch some athletics, but it is not a football ground. Shame. 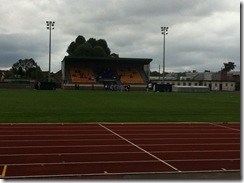 Chatting to several members of the committee, it was clear Croydon FC do not have any money, therefore a decent run in the FA Vase would be excellent for getting some much needed funds in and the chance to take in some excellent places. They were hosting local rivals Beckenham Town to see who have the pleasure of hosting Fisher FC or Ash United in Qualifying Round 2. Beckenham play just down the road at Eden Park Avenue and were actually playing in the Kent League. After a 10th place finish last season, they were coming into this game in 11th place (out of 16) and with Croydon down in 21st place (out of 22), this could be a close game. Croydon and Beckenham Town had actually met in the FA Vase last season in the 1st Round Proper. Beckenham had come out on top in that game with an extraordinary 7-3 victory before they crashed out in the 3rd Round with a 2-1 home defeat to Kings Lynn Town. I doubt it would finish 7-3 again, but we could hope. 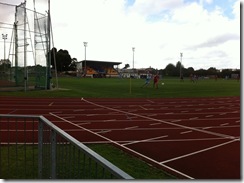 Game kicked off as I was standing over on the far side and felt like I needed binoculars as the action was so far away. Croydon made the better start as on 15 minutes a through ball caused the Beckenham back four all sorts of problems and a cross quickly delivered into the back post was only just cleared. Yet, just as you thought Croydon would get going, Beckenham went down the other end and scored. 18 minutes had passed when a fantastic cross came in from the right and Nick Curran was unmarked to place his header into the bottom corner and give Trams goalie Francis Ameyaw no chance. Croydon though did respond well and on 25 minutes, a long long punt from Ameyaw bounced all the way to the Beckenham goal which away goalie Nick Blue struggled to tip over his bar. The Trams kept plugging away and were rewarded with a deserved equalizer in 1st half stoppage time when a deep ball from the left was crossed brilliantly to the back post where Tom Pratt placed his header past Blue to give the game an interesting feel at HT. It wasn’t 7-3, but it was interesting! 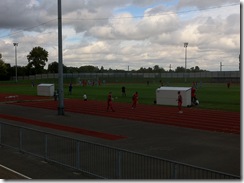 Beckenham came out for the 2nd half and instantly took the game to the home side as some early crosses were only just cleared by some last ditch blocks and some excellent interventions from Ameyaw. Midway through the half though, Croydon managed to counter-attack and stretch the game as a shot was fired just over the bar from outside the area. The major talking point (before the late drama) came on 77 minutes when a Beckenham player burst into the area before Ameyaw completely took him out. Everyone in the ground expected a penalty, but amazingly one wasn’t given. As a neutral, it was clearcut! Croydon’s best chance to win it came on 82 minutes when Mark Cecil was all alone in the 6 yard area after a counter attack but he could only blast over the bar. Then when extra-time looked on the cards, Beckenham snatched it. Some excellent skill from their left winger saw another cross played in and when a home defender missed the ball, Ben Slade threw himself at the ball and his diving header flew straight in. The away side had nicked it and also took home local bragging rights. Again. 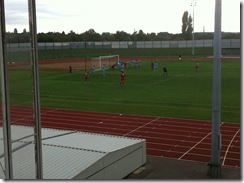 While this wasn’t the most exciting game I’d ever seen or the most skilful, this was compelling as you didn’t know which side would take it right until the final whistle. Beckenham were rewarded with a home tie in the 2nd Qualifying Round with a game against fellow Kent League side Fisher FC. A game I will be at! Not much else to say on Croydon FC. A nice club with a tiny but dedicated committee but sadly they play at an awful ground for football. Good luck to them for the future. The Road to Wembley 2011/12 has begun! 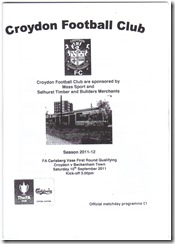