It was coming up to the most dreaded time of year. MOT time. With the costs rising each year – another costly MOT and it would be see ya to Victor who has served me so well. With the chance of getting to obscure games on the rocks (I’d be stuffed if Victor goes) it was the chance for a final “hurrah” as I’d headed east, quite a way east too to take in the SWP Div 1 East bottom of the table clash between Axminster Town and Bickleigh. 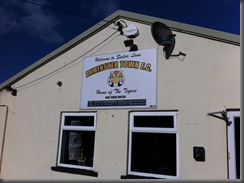 Axminster is a small market town on the Eastern border of Devon right next to Somerset. The town dates back to Celtic times of around 300 BC and lies on two Roman roads as well as there being a Roman fort just south of the present town. The town has been built up around carpets as the “World Famous” Axminster carpet was first produced in the town. Once manufacturing this was spread worldwide Axminster was put well and truly on the map, which was probably make a great carpet with lots of good layers and textures. Another highlight today is thanks to the success of the Channel 4 show “River Cottage”, the River Cottage Canteen and Shop is right in the middle of the town which was full as I walked to and from the game back to Axminster rail station. The celebrity chef, Hugh Fearnley-Whittingstall also has his River Cottage HQ nearby at a farm in the Axe Valley meaning Axminster is a logical place to sell his uber organic and home-made stuff. (To be fair, its probably very nice) 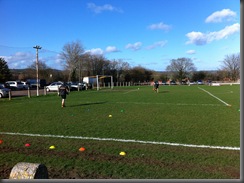 The town’s footballing side, The Tigers play towards the eastern side of the town at their Sector Lane ground. The main reason for coming to Axminster was that they are set to leave this ground for a new development in the north of the town at Cloakham Lawn (presumably near where the Bowls and Cricket club currently play) for the start of the 2012/13 season. Devonshire Homes are buying the land Sector Lane currently takes up and this is how Axminster are affording their move. As the ground is set to be a thing of the past there is no need to upgrade or even improve it and so Sector Lane is basically a field that is railed off around 3 sides. Down one side (the dugout side) the hard standing path is on a decent incline so you can get a good view from here. Behind one goal (pic above) is a good size carpark and just out of shot is the tea bar (where they sadly weren’t serving hot food) and the clubhouse. In terms of grounds, this is basic. Although its not soulless like the University of Exeter complex, I do hope their new ground has a wee bit more than this. The picture below is taken from their website and shows what Sector Lane looked like in the early 1970’s and it looks like a large stand is there where the dugouts are now. Shame its gone. 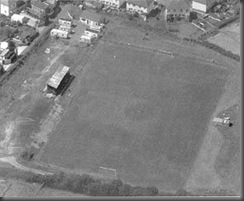 Axminster on the field are struggling a little bit down the bottom of the league and were going into this game on single digit points (9) having played 20 games. Amazingly, their only 2 wins this season had been recently and consecutively as on the 5th Feb they beat Totnes & Dartington 1-0 and followed it up a week later with a 2-1 vanquishing of Newton Abbot Spurs. The reason for the lack of points was clear (apart from losing, obviously) was only 21 goals scored in these 20 games. At any level, that is crap. If they do finish bottom this season, which looks likely, I’m unsure if they will be relegated. Their opponents for this game Bickleigh, had finished bottom last season and were still here so it depends on who will try and make the step up below from the local Level 12 leagues (N.Devon. Devon & Exeter, etc) which becomes clear soon. As mentioned above, Bickleigh who were in town for this game are still finding their feet as this is only their 2nd season at Level 11 in SWPL Division 1 East and had clearly improved on 2009/10. Although down in 14th (out of 16) going into this game, they were only 3 points behind goal leekers Ottery St Mary and had 2 games in hand on them so a rise up the table could be on. Bickleigh were also in the Devon FA Premier Cup Semi-Final where they will play Liverton United on March 22nd @ Exmouth Town. Clearly a team on the up, it remains to be seen how far they can rise but even in their current state, they are an asset to the SWPL. 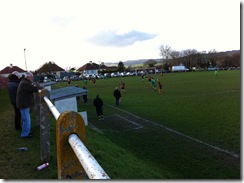 For the first 20 minutes or so of this game all that the 54 people in crowd saw were throw ins and more throw ins, it was really that bad. Had I checked Axminster’s previous home game results before I came out here, I would have noticed that they had failed to score in half of them and so this early stalemate was to be expected. Once the game finally started moving, Bickleigh had the main chances in the first half as their best chance was well saved by Chris Higgs when Bickleigh actually strung more than one pass together to work space out on the left before Higgs intervened. Axminster suddenly came to life when on 25 minutes when a low cross from the left was just volleyed wide by the Tigers striker. Apart from that, the other 43 minutes of the half was dire. Possibly the worst non-Hearts 45 minutes of football I had ever witnessed. What made it worse was despite being a sunny day in Axminster, the wind chill was quite bad and the surroundings did nothing to improve my mood. I was hungry, bored and wanting a goal. Although the 2nd half kicked off with both teams determined to make some sort of impact on the game, I deep down had already written this off as a 0-0 and a poor game. Fair play to Axminster then who really started creating chances to begin with and were getting a lot of joy from corners. A goalbound shot from a poorly cleared corner looked to be flying straight in until it was blocked brilliantly by a Bickleigh defender’s face. He didn’t mean it, but it gave me a chuckle. Danny Lewis in the Bickleigh goal then made a great save as I dared to believe I might see a goal in this game. Then on 69 minutes, a magic number for very different reasons, I struck the jackpot. But not how I had expected. Axminster were again pushing forward and were caught on the break when a long ball to the far right found Kieran Rapo. His first touch was quite brilliant to keep the ball in, take it past the defender and allow himself to run onto it and get a low cross in. While the ball flashed across goal, Bickleigh’s left winger managed to get a weak shot in that Higgs saved but could only spill and Stuart Bolt tucked home the rebound as Higgs sank to the floor. It was a scrappy goal, but a goal I had seen which did not look likely in the 1st half. Then Axminster upped the anti and started bombarding the Bickleigh goal in a desperate attempt to get an equalizer. As Bickleigh got more and more defensive as they tried to hang on, Axminster began winning a succession of corners as this game finally livened up. They were inches away from getting an equalizer on 82 minutes when a poorly cleared corner fell to the edge of the area and the shot fired back cannon off the underside of the bar and cleared to safety. The deserved equalizer came on 88 minutes when again Bickleigh could not clear a corner and when the ball was headed across goal, Richie Emmett calmly volleyed past Lewis and Axminster grabbed an equalizer at the death. 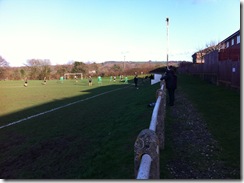 Axminster Town finally reached the land of double figure points as they are now on 10 points for the season. It remains to be seen if they finish bottom (they probably will) if they will be playing in the Devon & Exeter League. I suppose it remains to be seen who the teams are who have applied to come up. (March 3rd is when the SWPL board meet so we’ll find out soon, exciting stuff!) Bickleigh on the other hand should be looking at overhauling Ottery St Mary in 13th place and possibly Newton Abbot Spurs who the Bicks have games in hand over. As for this game, it got better, thankfully as this could have been a right stinker. I would urge you to visit Axminster as they are a friendly club, although they do need to get away from the basic Sector Lane. It remains to be seen what their new ground at Cloakham Lawn is like, but come 2012/13, I’ll be there! Now, this MOT…

Photos from Axminster Town vs Bickleigh 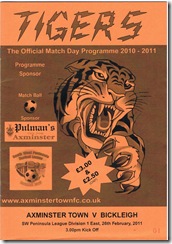