I hadn’t actually planned to go back to Tynecastle or watch Hearts at all after my dismal record of viewing them this season. 3 games, 3 defeats, 0 goals scored. It was keeping with my frankly embarrassing record of watching Hearts over the years, I had only seen them win twice out of 14 games I had viewed them in. However a history essay I am working on needed some primary sources from the National Library of Scotland and so another trip to Edinburgh was needed, and of course, a Hearts game.

Its just as well then that a strange mid-week set of SPL fixtures was here and Hearts played at home to Motherwell. This was the fixture from the opening game of the season where Hearts had beaten the Well 3-2 which was Csaba Lazslo’s first game in charge of Hearts. Sadly, the away game at Fir Park (a game I attended) was a 1-0 win for Motherwell and the worst games of football I had witnessed.

Both teams came into this game on the back of two good away wins on the Saturday. Hearts had finally won at Dundee Utd by 1 goal to 0. While Motherwell beat Inverness 2-1. Hearts would need to win this game to keep their 5 point lead over Dundee Utd in the race for 3rd place in the SPL, while Motherwell were looking to cement their place in the Top 6.

Tynecastle is a classic old school ground which has been Hearts’ home since 1886 and has undergone recent renovation in the past two decades to improve the Gorgie, Wheatfield and Roseburn Stands so the current capacity of the ground is now 17,420. The Vladimir Romanov regime has also wanted to improve the old Main Stand which is now the smallest stand at the ground to bring capacity up to 23,000. Whether this happens or not remains to be seen but an improvement could be great for Hearts and Tynecastle. 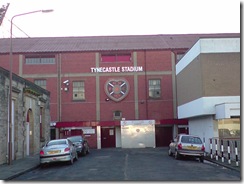 I took my position in my normal Stand, the Gorgie Stand, behind one of the goals, although this was the first time at the very top of the Stand so I was quite high indeed but still had a decent view. The game started off very tight with ‘Well boss McGee playing a surprising 3 up front, although a hoof-ball over the top constantly did not make for a good spectacle from the boys in white. Hearts took a while to get going, not helped by the lone striker up front, Adrian Mrowiec having a nightmare and was promptly taken off after 34 minutes for a more attacking Christian Nade. Motherwell also hit the bar in the 1st half although it would have been an travesty if they had actually gone in at HT 1-0 up. 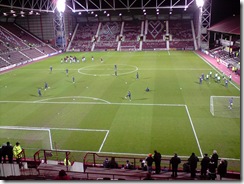 The 2nd half was very different game, with 5 minutes in Motherwell failed to deal with a direct ‘Delapesque’ long throw in which missed everybody except the head of Andy Driver. 1-0! My first Hearts goal I had seen live this season ,delighted. Could it last though? Well, on the 70 minute mark Motherwell captain Stephen Craigan and Nade both went for a ball that Nade, in my opinion had won fairly, however Craigan was badly injured by this challenge and needed to be taken off. What should have been a drop ball was actually a ‘Well free kick, which was only cleared to Stephen Hughes who hit a hopefully volley that flew straight in. 1-1. Both teams then went for it, and in the last 10 minutes I kept asking myself why did I bother? I wasn’t enjoying this game as a defeat for Hearts would be very costly. Why do I bother? Well on 91 minutes, after 5 minutes injury time had been announced, again Motherwell failed to deal with a long throw in and cleared a ball only to Ruben Palazuelos. Ruben had only previously scored one goal for the club (ironically a game I was at, away at Falkirk) and so when it fell to him, I wasn’t expected much. However a low drive took a deflection and rolled in. I could not believe it! Were Hearts going to win when I was there!? Motherwell still had time to have two corners, the last one resulted in a free header for Mark Reynolds which Janos Balogh saved well from. 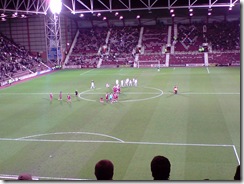 Game over, a 2-1 win! Only the 3rd time then that I had seen Hearts win. Motherwell manager Sour grapes McGee again caused some laughs after the game slating Hearts, but that can be expected from him. I dont want to completely rip into Motherwell here as it was a tight game, but they are a terrible footballing side, who only appear to know how to hoof ball and throw themselves about into a few bad challenges. The ‘Well fans also disappointed me singing about Christian Nade after Craigan had gone off which effected Nade for the last 10 minutes of the game, but a win is a win. Especially a last minute winner too.

Photos from Hearts vs Motherwell

- Atmosphere: 6/10 (wasn’t expecting much for a midweek game but both sets of fans quite vocal)

- Food: 5/10 (wasn’t hungry so only a bovril, but they have stopped doing Scotch Pies. Bad move)

- Programme: 5/10 (not as good as last season and a high amount of adverts which is disappointing) 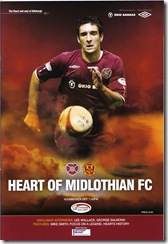 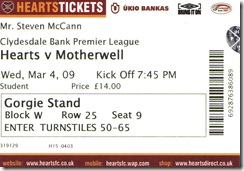