Well this was a bonus! Having to stay overnight in London for a massive (but successful!) day in London the next day saw me have a spare evening in the capital. Cheekily looking at nearby, but affordable games to spend my evening at. While there were other options (Brentford, Redbridge, etc) I decided to head North from Central London to the Borough of Enfield and Cockfosters league match against Harpenden Town. 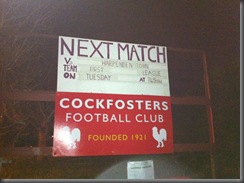 Cockfosters is a suburb of North London lying partly in Enfield and partly in Barnet. The name of the area can be traced back to 1524 as it is thought to be the name of a family or the name of a house. One suggestion that it was residence to the cock forester (or chief forester). Also in Cockfosters is Trent Park which is a country park and home to a Middlesex University campus. Finally, Cockfosters is served by the Piccadilly Line on the London Underground where Cockfosters is the Northern terminus of the line in Zone 5. 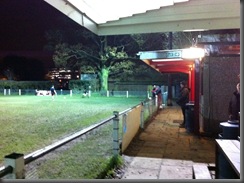 Upon arrival at Chalk Lane which is just a couple of minutes away from the Underground stop, it is a fairly basic ground with all the spectator facilities on one side of the pitch. With a small covered standing area next to the back of the clubhouse and a covered seating area with some benches and some random chairs under the cover too. This being my first ground in the SSML, I can’t really compare it to anything apart other Level 10 grounds I’ve been to (SWP Premier and Western D1) and it feels more like a Western League 1st Division ground, probably because this is the 2nd tier of the Spartan South Midlands League. The rest of the ground is uncovered hard and grass standing. 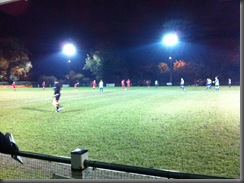 Cockfosters themselves will probably never have a large support due to their location and the fact they are near so many FL/Premiership clubs such as Barnet, Arsenal and Spurs to name a few. The attendance of 41 was one of their best so far this season and its understandable that although they were promoted to the SSML Premier in 2006/07 after finishing Runners-Up in D1, they were promptly relegated in 2008/09 after finishing 3rd from bottom with just 33 points from 40 games. After last seasons comfortable finish of 11th (out of 21), they seem to have struggled more this time out and went into this game in 17th (out of 21) and only 7 points clear of bottom side Amersham Town. Relegation to SSML Division 2 would see Cockfosters come up against such football heavyweights of MK Wanderers and Brache Sparta. To try and avoid this drop, Cockfosters had brought in a new boss who was officially announced for this game in Mark Adams to try and haul the Cocks up the table. Standing in their way for this game was Harpenden Town from Hertfordshire who themselves had previous in the SSML Premier Division but were down in 10th coming into this game and a massive 19 points behind top side Kings Langley. Situated inbetween Luton and St Albans, I was surprised to see a few Harpenden fans had made the 17 mile journey between the two places, but credit to them on a cold Tuesday evening. 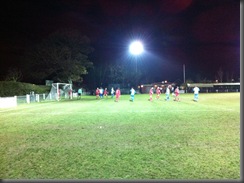 As for the game it was sadly a bit of a stinker. Made worse by the fact the temperature was at least in the minuses so when the final whistle went my body was pretty much frozen. The game did start well with both sides attacking and after some early Harpenden pressure, Cockfosters hit the bar after 4 minutes with Harp goalie Matt Lord well beaten. Lord made up for this 8 minutes later with a heavenly (sorry) wonder save as he reacted well to a deflected cross that was fired in towards him. Harps maybe should have been 1 up at half time when they missed a 1 on 1 chance later on in the half but as soon as that HT whistle went everybody in the ground knew this would finish 0-0. For the 2nd half, I actually didn’t write anything at all therefore all I can say is nothing happened of note! Shame really as the good start just fizzled out. 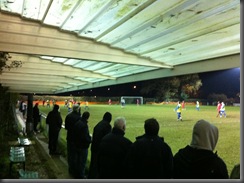 Twas a still enjoyable night out in London as me and 40 other nutters braved the cold to see this. I think most SW sides I’ve seen at this level would easily cruise past both of these teams but you can’t really judge them all on one performance. Cockfosters are a decent club and a friendly one at that too, so I will hopefully one day pay them a re-visit. I might see a goal next time!

Photos from Cockfosters vs Harpenden Town 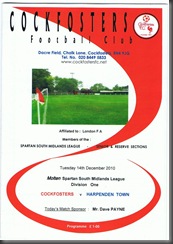