Maybe I’m a sucker for punishment but I wanted to see first-hand Hearts’ car-crash of a season with my own eyes. Hopes of maybe even challenging the Top 2 were whispered at the start of the season but a 0-2 defeat on the opening day to Dundee Utd has set the tone from there. Going into this game in 7th place at least we had a ‘cushion’ of a 5 point lead over bottom side Falkirk which could have been extended win a win over Hamilton. I had travelled to Hamilton last season in January which was the first match report I wrote for the blog (link above) and as its coming up to the blog’s 1st birthday I felt a return trip to Lanarkshire was in order. This time I brought two mates for the pain, although one decided to sack it off (wise, wise call) and go to the cinema instead. The game had also been picked for Sky Sports live coverage strangely, so the early Sunday start of 12:45 for kick off and 9:30 for leaving Lancaster was in order. 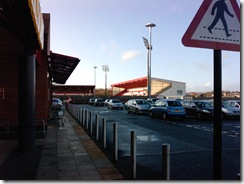 Hamilton is a large town in Lanarkshire which according to Wikipedia, not a lot has ever happened here. There is a palace and a few grand houses around the town but that seems to be about it. Hamilton also is undergoing a large regeneration project with new retail parks and shopping centres springing up around the town. The drive up was relatively fine, just a lot of rain and a lot of roadworks but we made it to the nice free parking Hamilton have with plenty time to spare. I’ll be honest right away about New Douglas Park – its laughable. It is basically a Morrison’s Supermarket with a football ground attached to it. One main stand for home supporters and away fans have the “Spice of Life” Stand behind the goal. There is also a piss-poor temporary seating stand which I have never seen used and behind the other goal is just large scaffolding to block the view from the Sainsbury’s store which is right next to the ground. (And is on the site of Hamilton’s old ground – Douglas Park) The Accies are enjoying their 2nd season back in the SPL and have set their targets higher than just survival this time. Hearts on the otherhand are in real danger of being sucked into the relegation battle which none of our players would be ready for and worryingly there would be only one outcome. Trips to Raith Rovers and Ross County next season. 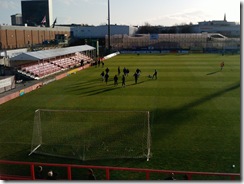 Yet, Hearts had picked up a 2-1 away win at Kilmarnock the previous weekend and I was quietly confident we could pick up at least a point here to continue our good run. From kick-off Hamilton had all the possession but didn’t seem to know what to do with it. Until 5 minutes in when a hopeful through-ball took out hopeless Hearts defender Dawid Kucharski to let Mickael Antoine-Curier through on goal and while his shot hit the post, James McArthur still had time to run through and smash home the rebound. An awful start. Hearts then started to get a hold of the ball but with no movement from anybody, we were doing nothing with the ball. Hamilton then went and scored again when Simon Mensing took advantage of Janos Balogh completely missing the ball for him to make it 2-0 after only 24 minutes. I was sat in disbelief at the utter crap I was watching wondering why I had made the decision to drive a 314 mile round trip. At least Hearts boss Csaba Laszlo changed it by taking off Kucharski for David Obua and it was close to half-time when Obua took on Hamilton’s right-back and skinned him with ease, his low cross was turned in at the back post by Eggert Jonsson – game on! Half-time came and we were looking ok to mount a proper comeback in the 2nd half. 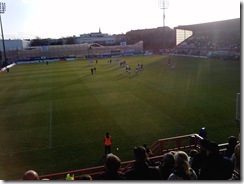 That comeback lasted all of 3 minutes in the 2nd half after Hearts captain Michael Stewart tangled with an Accies midfielder and Stewart pushed the player away. (TV shows this) ‘Referee’ David Somers however decided to show a straight red card to the player for reasons beyond me. Somers then decided to give everything to Hamilton, including a great tackle from Craig Thomson on Flavio Paixao which earned the youngster a yellow card. Hearts though were still creating the odd chance here and there and showed how bad Hamilton actually were. Any realistic chance of an equalizer vanished on 80 minutes when Ismael Bouzid (who had already been booked) decided to chest the ball down and play out from near his own area before bringing down an Accies player. 2nd yellow – cheerio. Hamilton obviously had all the possession now but as they are shite, they couldn’t hit a barn door with any of their later chances. Hearts then in injury time were denied 2 penalties, 1 clear cut after Calum Elliot had been brought down twice in the area. Somers wasn’t going to give anything to Hearts today. Full time. 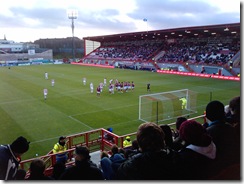 The story didn’t end there however as there was a “brawl” in the tunnel after both teams were leaving the field which resulted in Hearts’ Ian Black and Suso Santana being sent off as well as Leon Knight to bring the red card total to 5 for the game. Rumours are abound at what started the mass brawl, but I did hear that the Hearts masseur hit the referee (if this is wrong – then I apologise) which if true is brilliant as Somers was quite easily the worst ref I had ever seen. While our performance wasn’t great on the day, we deserved a point from the game and I am fairly certain we would have achieved this with 11 men on the field, but it wasn’t to be. My awful record of watching Hearts continue and I am now really starting to believe I am a jinx. Back to watching games as a neutral I think!

Photos from Hamilton vs Hearts

- Ground: 2/10 (worst ground in the SPL – some achievement when Fir Park is also in this league)

- Food: 6/10 (didn’t brave the macaroni pie, but it sounds interesting) 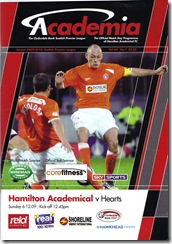 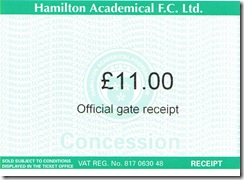