I’ll be honest, people might not realise how much effort and preparation go into me going to the games I do. I follow the “fail to prepare then you must prepare to fail” mantra which normally comes off. When I leave, how I will get there, etc. The game in Melksham however wasn’t particularly well prepared for, it was also doubtful whether I would even get to go to Melksham today as I had a more important task in picking up the missus from her cruise. The pick-up point was Chippenham and I had to convince her of the the merits and excitement to be had watching the FA Vase, while also hoping that she would be here on time to make the journey and still be in time to pick up a programme (!!) Yet, the luck was on our side today as she arrived on time and we made the shortish journey to the Wiltshire town of Melksham. Melksham is a decent size town on the River Avon and Wiltshire’s fifth biggest town by population. A quiet town with hardly any marks of note brought back memories for me as I lived in Chippenham for 22 months and visited Melksham quite frequently. 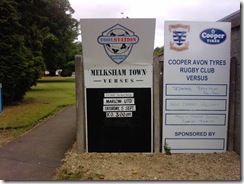 After a pit stop at the MacDonald’s on the way into the town, we made our way towards the brilliantly named “The Conigre” ground which should have been easy to find. However, roadworks on Melksham High Street blocked the quickest way in and so the problems started. The ground is well hidden regardless and the diversion signs to get us onto the other side of the High Street were no help at all. A 30 minute drive around the outskirts of Melksham made me think that The Conigre was not going to be found and even when we got back onto the High Street, we still couldn’t see it. Therefore desperate measures were needed. We dumped the car in a car-park and walked to try and find the ground, which was found with ease once I had spotted the large “Toolstation League” logo. Panic over and game on! Melksham Town play in the Western Premier (which is Level 9 of the English Football Pyramid) at The Conigre, which once found is a great wee ground right in the town centre. It has a striking black and yellow paint job all the way round which is of course the colours of Melksham Town. The ground has a small seating stand which is next to the rather spacious (for this level) dugouts and also is next to the clubhouse down one side of the pitch. The clubhouse was a tad messy compared to clubhouses I had visited before, but I was still made to feel extremely welcome. Behind one goal is just a plain standing space with some trees before the best feature of Melksham’s ground, a corrugated iron cover and standing walls that went down one side of the pitch and behind the other goal. (Picture below) Written on the iron was “Welcome to The Conigre” and “Melksham Town” which made this a main and striking feature of the ground. 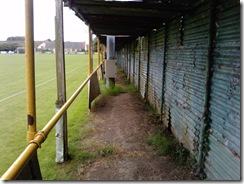 Melksham’s start to the season had been a little indifferent, winning both their opening league games before losing 3 in a row, including crashing out the FA Cup away at Reading Town. They currently were sitting in 10th (out of 20) and were using this game to try and get their confidence back according to their physio who I overheard. They were playing in the FA Vase 1st Qualifying Round which is an FA competition for teams playing below Step 4 (Level 9 and below) and was won by Whitley Bay in the 2008/09 season at Wembley. A competition that allows smaller clubs a day out to Wembley is a big thumbs up for me and so many teams take this competition seriously as they all have a chance of winning at this level. Melksham hosted Hellenic Premier Division side Marlow United who hail from Buckinghamshire, just south of Wycombe. They themselves had also had a mixed start to the season, winning 2 and losing 3 in the league as they currently lay in 17th position out of 22. They had also been put out of the FA Cup after just one game, losing to fellow Western Premier side Hallen at home. This game was also a little close to call and so a good footballing show would hopefully be put on. 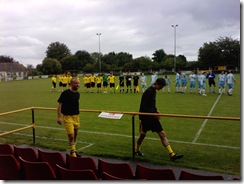 For the first half, I decided to sit in the seating stand as you could have a decent view from here. The game kicked off with a contrasting style of play and contrasting style of management from the two sides as Melksham’s boss, Wayne Thorne was part of the “loud and angry” style of bosses yet still get encouragement to his team, while Marlow’s Kevin Carvell was calm and talked to his players normally and Marlow made the early chances with some great blocks being made very early on to stop Marlow opening the scoring, yet it was Melksham who should have taken the lead on 6 minutes when a free kick was dropped by goalkeeper Carl Murray and Melksham captain David Seal sliced his volley over the bar with the goal gaping. It was a big chance and Melksham knew it. The football then began to get scrappy with very few chances as the build-up play was good but the final ball was letting both sides down. The next big chance came on 25 minutes when a long through ball found Marlow striker Jon Mason who was put through one on one with Melksham’s goalie Luke McFarlane, but the striker did not have the quality to get the ball on his stronger foot and the last defender and goalkeeper mopped up. Then Mason left a needless tackle on McFarlane which left the goalkeeper clutching his arm but was missed by the referee. Melksham however were furious, yet karma was on their side as just two minutes later an awful backpass was intercepted by Melksham’s Nat Auckland who poked the ball past the onrushing goalkeeper to make it 1-0. The game then continued to be tight with very little chances for either side until another long ball over the Melksham defence found Jon Mason who looked offside but he waited for the goalie to come off his line and lobbed him with ease to make it 1-1 after 40 minutes. Marlow had another chance before half-time after Mason (who was already unpopular) went down with the most outrageous dive and the referee bought it just outside the box. The free-kick just went wide so it was level at the break. A very interesting 45 minutes lay ahead. 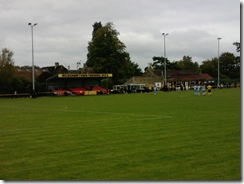 At half-time, I quickly checked to see how Scotland were doing in their must-win game against Macedonia (it wasn’t looking good), bought a decent cheeseburger and then moved around to the other side of the pitch to get some more pictures and see the game from a different angle. The second half was even more even than the first with very little chances for either side, even half chances. It was interesting to hear some of the comments from the players being a lot closer to them in this half. Such as the Marlow #7 who shouted, “I am having an absolute mare!” Then he dived in the penalty area, got annoyed at the lack of decision and recklessly brought down a Melksham defender in anger. At least he was being honest then. Another thing I did not realise about the FA Vase was that in this round, if the scores stayed level after 90 minutes, they played an extra 30 mins of Extra Time before going to a replay. So at this point I was just wanting a goal, a winner, so I did not have to force another 30 minutes for the missus. Melksham looked to have provided that on 80 minutes when another long ball provided by Ben Macey, found Sam Jordan who easily turned past the last defender and shot low past the Marlow goalkeeper. Melksham had 10 minutes now to hang on and as their manager bellowed, “I want to see every one of you!!”. He definitely saw Lee Stoddart then who latched onto a great diagonal ball from Macey and chipped the goalie who managed to get a decent hand on it, but could not prevent the ball from rolling in. 3-1. Tie over. The last 7 minutes I did expect to see Marlow create some chances to keep the pressure on Melksham, but the game was up and Melksham hung on with ease with no final chance to talk about. They go onto play Hellenic League side Fairford Town in the Second Qualifying Round. 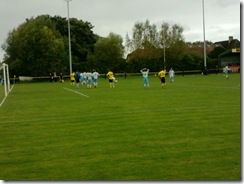 An enjoyable day out in Wiltshire then as I got to see a ground and game I didn’t expect to go to. I do like the idea of the FA Vase as it provides clubs with another competition to keep a Wembley dream alive should they (and they normally do at this level) crash out of the FA Cup early on. I really like The Conigre, especially the corrugated iron section as that is something a little different from what you usually see at football grounds. A good day was topped off when I found out walking back to the car that Scotland had managed to beat Macedonia to keep their World Cup dream alive, until Wednesday (9th Sep) when we will probably lose to Holland. Its also unlikely I will get to another game before going back to university at the end of September, so it looks like Deepdale will be my next new ground.

- Atmosphere: 4/10 (got some singing which is rare for non-league)

- Referee: M.Derrier – 5/10 (was ok, most major decisions fell to the linesmen who weren’t great) 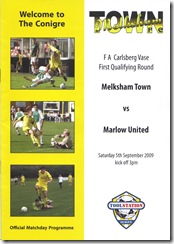