So this was it, after 3 years at Lancaster University it was time to collect my degree, graduate and head off home. Wherever that may be! Just before that though I had to get one last Northern ground before I headed South and so chose Evo-Stik club Radcliffe Borough as they hosted League 2 side Bury in their annual pre-season friendly. 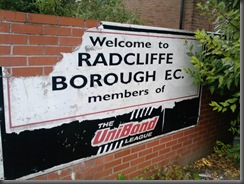 Radcliffe is a town in the Metropolitan Borough of Bury in Greater Manchester and only 2.5 miles away from Bury. Along with every town in this area, Radcliffe’s legacy is based in the Industrial Revolution with textile manufacturing and some buildings from this era still stand today. Radcliffe in 2010 is now a heavy residential area, most likely for commuters travelling to Manchester and the local bigger towns. Landmarks include the Radcliffe Tower and Outwood Viaduct, which is now for the general public only. 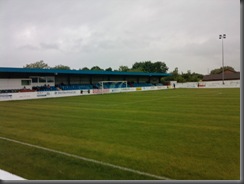 Sport has also left a rich history and legacy in Radcliffe, with one of the football teams being Radcliffe Borough who were the reason I was there. Boro play in the Evo-Stik Division 1 North (Level 8) and after finishing 10th in 2009/10, may fancy their chances of a play-off position this season. Their home ground of Stainton Park is a decent one by Evo-Stik standards with a decent sized seated stand behind one goal. and alongside this down one end of the pitch is a covered standing area and the other two sides of the ground is uncovered and standing. Boro have a fine history with ex players with Frank Worthington, Matt Derbyshire and Craig Dawson all having graced Stainton Park. 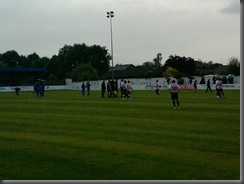 FL side Bury annually bring a side down here for pre-season and having won the last two games 2-1 and 4-1, they clearly used this game as a serious workout. This time out, Shakers boss Alan Knill brought 8 trialists to start the game as well as two 1st year pros and a player who missed most of last season. While this was disappointing to most of the crowd to not see recognisable 1st teamers, some of the trialists were known such as Jermaine Johnson, Kenny Strickland (Man Utd FA Youth Cup Finalist 2007), Adam Kay and Simon Whaley who, amongst others, were looking for a full contract. 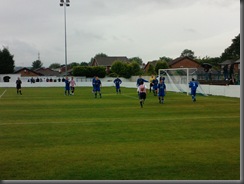 The game kicked off with Bury clearly looking like the FL side as they dominated early proceedings with Kyle Bennett especially impressing with some great pace and trickery. The first chance of the game came through Bennett’s pass to Duane Samuels, but he was caught offside. On 12 minutes, Bury thought they had the lead when Craig Mahon’s quick flick over the Radcliffe backline found Danny Carlton who poked past the Radcliffe keeper. Yet the flag was raised and Radcliffe were let off the hook. The rest of the half saw Radcliffe struggling to get going and get out of their own half as when they did, their toothless strikers struggled to get anything out of Bury’s backline. Bury should have opened the scoring several times with Carlton, Bennett and Hewson wasting chances as it was 0-0 at half-time. 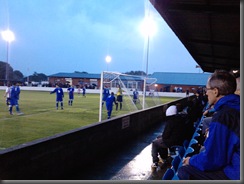 By this time, the weather, which had been miserable all evening got worse with the rain increasing and the wind starting to pick up too so I sat behind the goal Bury were attacking for the 2nd half on this very cold evening. Low and behold, in the 1st minute of the 2nd half, Radcliffe launched the ball into the box and Tom Brooks had time to place a half volley well past Richie Branagan to give the non-league side the lead. It was back to normal soon afterwards as Bury started to pummel Radcliffe again but lacked a clear cut penetration that would probably be found in their 1st XI. Bury’s performance was best summed up late on when Danny Carlton was put clean through and blasted his shot so high that it cleared the stand and out the ground. A miserable night and a miserable game too as Radcliffe secured the win. 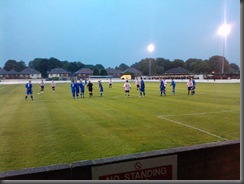 In the end then, a fairly poor way to end my tour (for now) of Northern grounds as this game really wasn’t up to much. As I write this so long after the event (cheers Toshiba), I can see that out of the trialists who played that night for Bury, only Kyle Bennett appears to have been offered a contract which is no surprise. While I feared a little for Bury on this performance, their 1st XI have had a decent pre-season and should be full of confidence going into their opening game at home to Port Vale. Was also a little cheesed off about the lack of programme at this game after Radcliffe’s Programme Editor said they would be one, but nevermind. Shame Radcliffe didn’t respond to any of my e-mails asking what the attendance was or who the referee was. Nevermind.

EDIT - Radcliffe have since replied about the attendance and the official figure is now given!

Photos from Radcliffe Boro vs Bury

- Atmosphere: 4/10 (weather dampened the mood of everyone)