Apart from football, I have two other sports that I really love. One is tennis and as I couldn’t get tickets for the Wimbledon final between Federer and Roddick, my other favourite sport (2nd behind football) would have to be viewed instead. That is motor racing, well Formula 1 in particular. I have been a fan of the series since around 1998, with Mika Hakkinen (my all time F1 hero) winning the World Championship with McLaren (my all time F1 favourite team). I now try and view every race of the season, even if that means getting up at 5am to view the Australian GP! Therefore when Renault announced that their World Series tickets were to be free for the British leg of the series at Silverstone, I jumped right on it and ordered tickets.

For those who don’t know Silverstone, let me explain. Silverstone circuit, in Nottinghamshire and Buckinghamshire, was built on the site of a former WW2 bomber base, RAF Silverstone. It hosted the very first Formula 1 World Championship race in 1950 which was won by Giuseppe Farina in an Alfa Romeo. He went on to become the very first winner of the F1 Drivers Championship with 3 wins that season out of 7. It had hosted the British GP regularly since 1950, however it has been announced that Donington Park would host the British GP from 2010. However with Donington not looking ready for then (major improvements are needed), Silverstone could host one last hurrah next year. Silverstone still hosts major events, such as the Le Mans Series and Moto GP (from 2010). It is also the home of British Motor Racing with even a stand built just for its members. 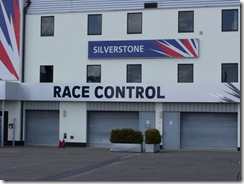 For the Renault World Series, many events are held across the weekend, however due to the fact we live 4 hour away from the track, me and my Dad made the journey for the Sunday only and arrived in fairly nice weather (a change for Silverstone) to view my first racing event. We first sat at Nuffield, one of the final corners of the track where the main event, Formula Renault 3.0 race was about to take place. Here is my view of the track: 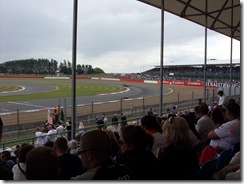 I also got some decent shots on my digi camera of some of the cars coming round in the formation lap: 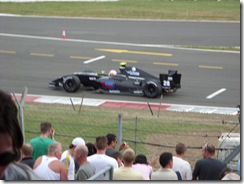 And also caught the cars coming round on Lap 3 on film, now on Youtube:

(Apologies for some shoddy filming!) The race was won by Charles Pic who was driving for Tech 1 Racing. Championship leader Marcos Martinez came 6th. After that race we headed towards the pit straight for a wee wonder about, before picking up something to eat. Sadly, my cheeseburger cost £4 and that was cheap! We headed up to Woodcote curve where you come onto the start/finish line, for the 2nd race – the Eurocup Mégane Trophy which was quite entertaining, with spins (not in our part of the track sadly) I caught the start on film too:

This race was won by Dimitri Enjalbert who was driving for Boutson Energy Racing. We walked around after that again, over the bridge to the attractions, demos and exhibitions that Renault had put on, such as classic cars like this F1 Car driven by Alain Prost: 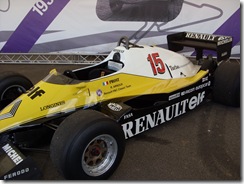 The final place we stopped to watch was at the Chapel turn where here we sat Nigel Mansell drive around in a classic F1 car and also this season’s Renault F1 car do a demo run. We decided to sack off the final race, a touring car race, and head for the car park. I’ll be honest now, I had read and heard some people’s experiences in trying to leave Silverstone but I did not expect to be stuck in a field for 2 hours going nowhere. That said we did finally get out and made the long journey home. An enjoyable day out at my first motor racing experience and hopefully Renault will change the track for the 2010 World Series leg in the UK so I can see more.