I hadn’t actually planned to see a game on this day as it was all about London Broncos vs Wakefield Wildcats in the evening for the massive rugby league clash. However, yet again the Non-League Matters forum came up with some interesting games, and none more so than Fulham Youth who were at home to Bristol City’s Youth. Fulham were having an excellent season so far in the Academy League and had reached the Quarter Finals of the FA Youth Cup this season too. With some good football in prospect too, it was an easy choice to make. 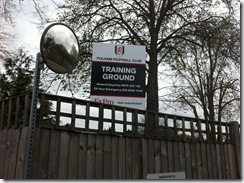 Fulham’s training ground is at Motspur Park, the suburb in South West London. The district was historically known as West Barnes and formed part of the traditional county of Surrey. It was rural right up to the end of the nineteenth century when the railway station was built. Two local lanes, West Barnes Lane and Blakes Lane, represent remnants from this rural era. Today, the area holds local shops as well as two large gasometers and a large amount of playing fields. Fulham bought the grounds off the University of London in 1999 who until then had used it as an athletics stadium. It had achieved fame in 1938 when Sydney Charles Wooderson set the then world mile record of 4min 6.4sec.

Motspur Park is a large venue with at least 6 pitches and it is where all of Fulham’s teams train right down to the little kids. (Under 7s?) A few first team members who clearly weren’t in Fulham’s match day squad for their game against Norwich City to be played later that day (Fulham won 2-1). A large building dominates the grounds which houses (I presume) offices as well as the changing rooms for the various pitches on site. This Under-18s game was actually taking place right at the back of the complex on the pitch nearest Motspur Park rail station and has basic, but adequate spectator facilities. The pitch is roped off down one side where the spectators stand, while a van at the back was selling some excellent bacon rolls which was perfect for a hangover I was nursing. In terms of getting in, while some clubs have a blanket ban on spectators viewing their Academy games, Fulham do allow people in but you have to send an e-mail to Charlotte Bellamy at the club to get your name on the “guest list”. You are given an actual ticket at Motspur Park which is nice and the whole place does seem to have a fairly relaxed atmosphere. 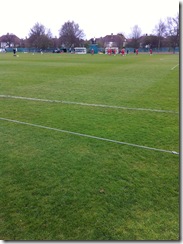 On the field, Fulham Youth have had a great season in Academy Group A and themselves, along with Arsenal and Charlton Athletic had a chance of finishing as Group A winners and qualifying for the play-offs which they achieved last season before losing the final to Everton’s U-18s. They also have some history in producing some great players from their Academy with Chris Smalling, Kerim Frei and Sean Davis have all come through here, amongst others to have (or continue to have) a decent career. Their opponents for this game were down towards the lower end of Group B (teams play 10 inter-group fixtures) as Bristol City had made the long trip east. While Group B looks to be a 3 way fight between Reading, Leicester City and Coventry City to be Group B winners, Bristol City were not troubling them down in 8th spot. They had also crashed out the FA Youth Cup in the 3rd Round (first one they enter) with a 5-1 defeat to Portsmouth to cap a poor season for them. With just pride to play for, they came here hoping they could pick up a good 3 points as they fight it out with MK Dons to see who picks up the Group B wooden spoon. 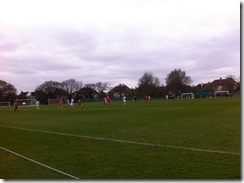 It was the away side who actually started off the better as they looked more up for it and seem to be the more threatening when going forward. There was also a brilliant moment I enjoyed when Bristol City produced some great skill to get the ball away from the corner flag and start an attack that sadly came to nothing. Their best chance actually came on 6 minutes when they broke down the right and the cross was met with a great header that Grant Smith did well to save. After that scare, Fulham began to get a lot more of the ball but again City were more than a match and hit the post from a corner after 23 minutes. In fact, even though Fulham began to push forward more, I still expected the first goal to go to the away side. So no surprise then when Fulham took the lead on 34 minutes. A great crossfield ball from Christensen to Banya who in turn sent Omri Altman clear down the left. His low cross found Cauley Woodrow who had an easy 2 yard tap in to open the scoring. City now needed to hold firm before HT but instead allowed Lyle Della Verde all the space in the world to cut in from the right and fire an unstoppable shot into the bottom corner just 2 minutes later to make it 2-0. City looked stunned but managed to hold out for the rest of the half with no further damage. 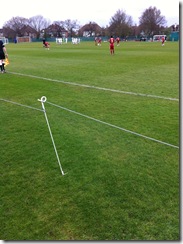 I was expecting Bristol City to start like the 1st half for the second 45 and try and get an early goal back but it was Fulham who got a 3rd and seemed to kill the game off within two minutes. A cross from the right was unchallenged and an unmarked Woodrow produced a good header to give the goalie no chance. City heads completely dropped now and Fulham bombed forward as they could easily notch up a nice goal difference from this game. Goal #4 came in the 55th minute as again Della Verde had time to cut inside and fired another low shot from the edge of the area into the bottom corner. Fulham began to play some good football now and should really have kept a clean sheet but City did pull one back on 77’ when some excellent skill on the right wing got a cross in which seemed to be divered in off Tom Andrews or a Fulham defender. They even had a chance to make it 4-2 when Fulham clearly felt the game was over and a poor clearance was fired over the bar when Grant Smith was stranded. Fulham really did kill the game off however on 82 minutes when Della Verde was sent clear down the left and he fired a low shot into the bottom corner to end City as an attacking force and end the scoring.

This was a good win for Kit Symon’s team who carried on their good form with a 2-1 win away at Charlton’s Academy to put themselves in pole position to win Group A. With games against Reading and Norwich coming up, they know that two wins will win them the Group for the 2nd year running. As for Bristol City, they need to improve as I do wonder how many of their players will actually ever make the 1st team, but good luck to them. If you can get into Motspur Park, I do recommend it as it is a nice place to take an early Saturday game in and to see some excellent football being played. And who knows, I may have just watched Fulham’s next star in this game!

- Ground: 5/10 (essentially a training pitch but in good surroundings)

- Food: 8/10 (possible bonus marks because I was hungover, but bacon was excellent) 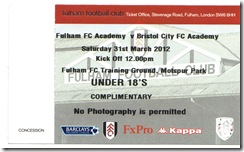