Cost: £5 (day ticket – allowed entry to all 4 matches being played that day)

I’ve begun to notice how short this summer break is for football. With the domestic season ending around the end of May and pre-season games kicking off the beginning of July, that leaves about a month of holiday for everyone involved. Luckily I had the Confederations Cup this summer to keep me occupied and my 2nd year University exams too. Now they were out the way and I had a summer of doing not a lot, I was glad that the Southwest Challenge Cup had arrived so my 09/10 season could get underway. I had blogged on the Southwest Challenge Cup here: http://thetravellingfan.blogspot.com/2009/07/southwest-challenge-cup.html (for those reading this on the archive). The rules of the Group Stage were 40 mins each way, with rolling subs and the points scored would be: Team winner = 3 points, Team loser who scored = 2 points and Team loser who were goal-less = 1 point. Any matches ending in a draw would be decided on penalties.

While some may not enjoy these pre-season games, I like the relaxed atmosphere and the working out you need to do to see who is that un-named trialist your club seem to have pulled in last minute. I decided upon the game at Appledore, right on the North Devon coast. Appledore is famous for a few things, the big shipbuilders which is still there today. Hawking’s ice cream, which is based in Appledore and is extremely nice and also famous for the Jackson’s coming to live there for 6 weeks last summer. The ground itself, is on the road into Appledore so its hard to miss. It does have parking there but tonight this was reserved for players and officials only so I had to park across the road on a field. Marshfield is a small, but adequate ground with it being railed off on all sides, but with cover down one side where the clubhouse is. Appledore, who normally play here, play in the South West Peninsula League Division 1 East (which is Level 11). They seem to finish in mid-table a lot so are most likely not going to leave that Level for a while. 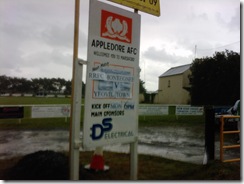 The first team to come here were Yeovil Town who play in League 1 (Level 3), and are near enough the local area to have brought a decent travelling contingent to the game. They finished 17th in the league last season, however I feel a mighty struggle for them this season looks likely as League 1 has a lot of “big” teams in it this season. Under boss Terry Skiverton (who said hello to the fans, he looks about 10) a season of survival might be seen as successful. They had brought a load of trialists to the game, including two goalkeepers, as they currently have none on their books so it would be interesting to see how this squad would perform. Their opponents were the reason why I had chosen this game. RRFC Montegnée play in the Provisional County D1 in Belgium (the lowest national league – thanks to dottirofhod for that information). However, they are slightly different, as their mission states, they aim “to provide student athletes an opportunity to reach their optimal playing performance, while pursuing a professional degree.” Their team are made up of youngsters from worldwide who study while playing professional football at some level. Some of their new recruits this season have come from clubs like Villarreal, FC Hollywood, Academia FC and Toronto Lynx amongst others. It would be interesting to see these players here and a club/university hybrid and see how they perform.

When I arrived at Appledore wet would be an understatement. Peeing down and then a bit more would be how to describe the weather and the first time I took the picture above, it was blurry due to my camera lens getting wet. The hardy band of supporters (a decent turn out from Yeovil) took shelter under the only bit of cover at the ground to watch both sides train and warm up. The food on offer was either a chip van, a Hawking’s ice cream van (in this weather!?) or something from the clubhouse. However the entrance to it flooded early on, so I stayed away and played safe with chips before kick-off. 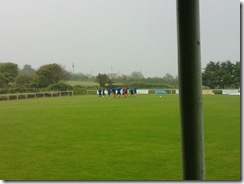 The game kicked off with it still peeing down, and actually getting heavier still as both sides tried to get the ball down and have a play. While the quality wasn’t great from either side, there were some good honest tackles coming in from both sides. Montegnée tried to force themselves into the game and at times early on got themselves into good positions only to waste the chance through lack of support or no final ball. It took them a while to get going Yeovil but when they finally did, the chances started to come. Firstly Gavin Tomlin was put through but the Montegnée goalie did well to block the shot with his legs, however the defence began to look more static and it was no surprise when a good passing move from Yeovil put on trial striker Hamdi Razak through on goal and slotted the ball under the goalie to give Yeovil the lead. The young Belgian side needed to stay strong here till half-time yet they began to fall apart as Yeovil began to batter them with Razak first missing a brilliant overhead kick which unluckily went past the post and he also missed another good chance just before half-time. Montegnée had survived to get in at 0-1, but only just.

The second half kicked off with no rain and with Yeovil having changed their squad entirely for the 2nd half and Montegnée tested new goalie Arran Lee-Barrett with two decent efforts at the start of the half. The rain didn’t hold off for long however as the heavens opened again soon into the 2nd half and Yeovil began to dominate as they looked to put this game beyond the Belgians. Firstly, the Provisional League side struggled to deal with some decent crosses being put in, however it was soon over as another through ball put through another striker on trial, Sam Williams (who featured at Brentford last season) who took the ball around the goalkeeper and was brought down for a penalty. Ryan Mason (who is on loan from Spurs) stepped up and easily scored to make it 2-0. Here Montegnée began to fall apart with a great passing move opened up the Belgian defence with ease and Nathan Jones (Yeovil’s Assistant Manager/Player) finished the move off by placing it around the keeper for 3. Another goal was scored soon after when a great curling shot from Dean Bowditch (also on trial) was well saved by the Montegnée goalie, however he spilled the shot in front of Aidan Downes and he couldn’t miss. The end of scoring was completed near the final whistle as another good cross was put in by Nathan Jones who found Aidan Downes again, who had got in between goalie and defender, and he volleyed home to make it 5-0. Game over. 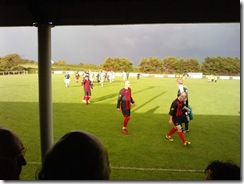 While seeing 5 goals on the opening game is fairly good, it did seem a tad harsh on the Belgians who had matched Yeovil for most of the first half and had created a few chances of their own. They will look to do better tomorrow (Wednesday 15th) when they take on Grimsby Town at Barnstaple’s Field Mill. Yeovil will be pleased with the run out and look good to qualify for the semi-finals from this group when they take on Grimsby Town in the decider on Friday 17th at Torrington (a game I will be at). As for the weather…… Strange. Rain, sun, it was still fairly warm and even a rainbow (check my other photos) were all here at Appledore. A decent start to the Southwest Challenge Cup although only 85 was the official attendance (it looked much more) and I hope it continues on Friday. Its good to be back.

- Value for money: 5/10 (£5 for one game isn’t value for money, however the opportunity to go to the other day’s games is)

- Atmosphere: 4/10 (hard to create a good atmosphere here, but a decent turn out from the Glovers fans)

- Food: 5/10 (the chips I had were only 99p, but not that great. Nearly had the audacity to buy an ice cream in this weather)

- Programme: 9/10 (the tournament programme is only £1 and is well detailed and good looking too)

- Referee: Marvyn Amphlett – 7/10 (fair play to Marvyn for realising this was only a friendly and was very wet after a few flying tackles) 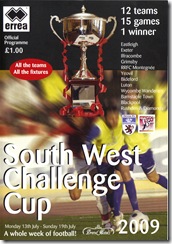