Programme: £1.50 (joint issue with all 3 PSF’s with Scottish teams)

Its been less than 2 months since my last game of 2009/2010 and the World Cup was still even on when I decided to finish my time in the North-East with my first game of 2010/2011 with a friendly featuring one of the most Northern teams in England and one of the most Southern in Scotland (Technically). There had been other games I had planned to go see, included North Shields vs Calverton Miners Welfare, but when Calverton pulled out, Blyth was the game to see. So a short car journey from Newcastle saw me arrive (without getting lost!) in Blyth and getting the last space in the carpark next to the clubhouse. Already a good start to the new season! 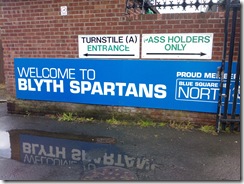 Blyth is a town in the Southeast of Northumberland which has seen a dramatic decline in the town, followed by a recent revival and is clearly a town on the up. Like most Northern towns, the main industries which helped the town prosper have all but died, in Blyth’s case this being shipbuilding and coal mining. However regeneration projects kicked in around the 1990’s and so Blyth today is not as bad as people make it out to be. The Quayside has seen the most development but other attractions in Blyth include the Keel Row Shopping Centre and the Blyth Harbour Wind Farm. It is also home to a major giantkilling club which was the reason I was there. 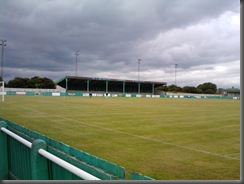 Blyth Spartans are best known for their numerous exploits in the FA Cup where they have on several occasions given Football League sides a bloody nose and a cup defeat. Crewe, Stockport, Stoke City, Bury and Bournemouth to name just a few have all been on the receiving end of a Blyth cup shock. The Spartans now play their football in the Blue Square North (Level 6) and came a disappointing 13th last time out. Their home ground of Croft Park is a great wee ground situated just near the town centre. Its covered at some point all the way round with only 1 seated area called “The Port of Blyth Stand” which overlooks the pitch. Other covered/uncovered hard standing areas are around the ground which means should Blyth get promoted, improvements can be made fairly easily. Spartans boss Mick Tait was looking to strengthen his squad and so as always with a side’s 1st pre-season game, fielded many trialists looking for a permanent deal. 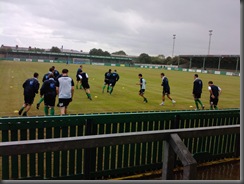 The team they faced in this game was SFL side Berwick Rangers who were in the 3rd Division after finishing a poor 6th in 2009/10. Famously the only English side to play in the Scottish Leagues, Berwick have been tipped by a few this season to struggle and when I write this have already crashed out the League Cup with a 1-0 defeat to Peterhead and face a daunting trip to Partick Thistle in the Challenge Cup after receiving a 1st Round bye. When they kicked off this game, Berwick actually looked the stronger team with their pace upfront giving Chris Swailes and Wayne Buchanan trouble at the back. However Blyth started to get going and opened the scoring on 25 minutes when a poorly cleared ball fell to trialist Nicky Deverdics on the edge of the area and his shot cracked off a post and in. Blyth then doubled their lead almost instantly when a throw-in found John Alexander who turned on the ball and quite brilliantly curled the ball into the top left corner and away from Berwick goalie McCaldon to make it 2-0 and shellshock Berwick. Blyth also had a goal disallowed just before half-time as they went into the break very comfortable. For the 2nd half I sat behind the goal Berwick were attacking, although based on the 1st half I didn’t really expect much action to take place there. In fact, Berwick actually were the better team as they created many chances around the Blyth penalty area but a poor final ball or block stopped them from really creating a golden chance. In the end, Blyth made it 3-0 towards the end on 75 minutes with a great counter attacking move that saw Paul Brayson break away to find Robert Dale who stepped past the last defender before curling the ball around the keeper to finish off the scoring. Berwick almost pulled one back very late on when a shot from outside the area looked to be going in directly in front of me until Sam Greievson pulled off a great one handed save to deny Berwick a consolation strike. A very good workout for Blyth in the end. 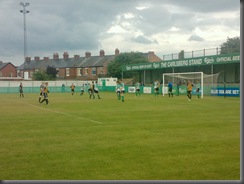 As I’m writing this nearly a month after the match because my laptop hard-drive failed, I can see now that Blyth are shaping up nicely for their opening league game away at Solihull Moors on August 14th. Berwick, lost their opening competitive game in the League Cup to Peterhead and look set to struggle down at the lower reaches of Scottish Division 3 this season starting with an away trip to Albion Rovers tomorrow. (August 7th) Finally, Blyth didn’t sign Nicky Deverdics, probably due to wage demands, and Wikipedia holds no clues about where he’s ended up!? Any ideas?

- Atmosphere: 5/10 (nothing special, although Berwick’s left back got pelters) 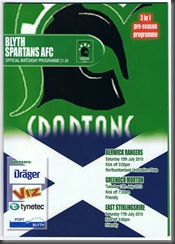