The final game of my season had been set in stone some time ago. A cup final on May 12th. Therefore May 7th was my final Saturday of my biggest ever season and I wanted to find a game (preferably a league match) that had something riding on it. Luckily the Southwest Peninsula League Division 1 West title race (and therefore promotion race) had gone right down to the wire between Camelford and Callington Town. Having been to Camelford less than a month ago, it was only fair I paid a visit to the other challengers for their final home game of the season. Off to Cornwall! 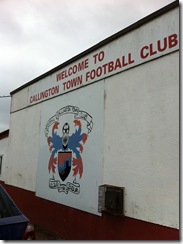 Callington is a small town in southeast Cornwall inbetween Saltash and Launceston. The town has long been supposed to be the site of the ancient tribal capital of the Kingdom of Cornwall and Arthurian base, known in the sources as Celliwig. References to it are made repeatedly, particularly in the Welsh Triads and other manuscripts. However, it should be noted, that Callington is only the foremost among several contending possible locations. In the 18th century, Callington was one of the most important mining areas in Great Britain. Deposits of silver were found nearby in Silver Valley. Today, the area is marked by mining remains, but there are no active mines. However, granite is still quarried on Hingston Down. Today, food manufacturer Ginsters is the largest employer in the town and employs hundreds of locals as well as many immigrants who have arrived as a consequence of the recent accession to the EU of a number of Eastern European countries. Ginsters uses local produce in many of its products, buying potatoes and other vegetables from local farmers and suppliers. 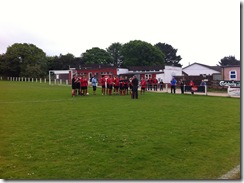 I’ll be honest, I hadn’t actually looked forward to visiting Callington’s Marshfield Parc. This wasn’t down to the club, it was down to other hoppers reports on the place which painted a picture of the ground being basic and maybe not the best place to watch football, despite the clear quality on show this season. Once I arrived, I will admit I was quite wrong. Situated in the grounds of Callington College, Ginsters Marshfield Parc is a decent enough venue that also has some grand plans for it. It is railed off all the way round and has some covered standing on the home dugout side as well as a temp tea hut in a portakabin type building. On the other side is a raised hill that is currently a building site and upon enquiring, I was told Callington’s clubhouse would be built there which would allow for extra revenue to be made and for them to push on. With the building looking a good size and the raised hill offering an excellent view, this could be a great place to watch football after summer. Floodlights also are planned and they have an agreement with the college (who own the land presumably) to build them, once Cally get the £30k needed. This is a decent ground already and it could become one of the SW’s premier non-league venues (I’m not exaggerating) over time. 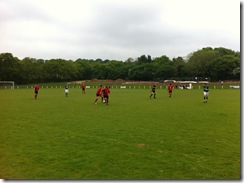 On the pitch, it was looking decent for Cally too going into this game. Currently in 3rd (although with a game in hand over 2nd place Godolphin Atlantic) they were 4 points behind leaders Camelford who they had to play for their final game of the season. That game had been rearranged which was the result of massive controversy. Callington had been 4-0 up at Camelford before the referee abandoned the game after around 80 minutes. However, the referee thought only around 60 mins had been played so ordered a replay. After some digging, it had been discovered the referee for that game was actually related to a Camelford player. I’ll say no more. Callington had also failed to take advantage of Camelford’s shock defeat to Truro City Reserves with only a 1-1 draw with Perranporth. Which meant Callington HAD to win and hope Camelford lost at home to 4th place Vospers Oak Villa to take the title (and promotion) down to a winner take all final game. It would also be my final league match of the season which was some nice symmetry as my first league game of the season was way back in September when I saw Callington at Okehampton Argyle. (Cally won 3-2) 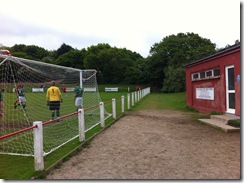 Trying to stop them was the small Cornish side of Mousehole who hail from the deep deep SW of the country. A tiny little club, who’s manager was actually the club lino for this game, it is a credit that they can survive in this league with the small facilities, small number of players and volunteers for the committee. They were going into this game down in 14th with 21 points and could be caught by Okehampton Argyle should they win their final game at home to Dobwalls and Mousehole lost here. Pre-game I was welcomed by the friendliest club I have been with all season as the gateman was very friendly and the man on the tea bar was extremely chatty and served a brilliant pasty. Only £1.50 and was the nicest pasty and possibly ground grub I’ve had all season. So nice I actually bought 2! The friendly atmosphere continued just before kick-off with Callington’s Fans Player of the Year announced as captain Dan Jefferis. 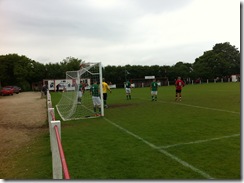 Callington kicked off playing some absolutely great football, well above the Level 11 station they were currently playing at. Mousehole on the other hand were struggling to contain them and an opening goal looked only a matter of time. On 6 minutes that goal came when Cally won a corner. Up stepped Kevin Francis who curled a low corner straight in. He may have meant that as when I saw Cally at Okehampton, they also scored straight from a corner. Mousehole held an inquest into how the ball had went in at the near post despite players on the post, but nearly stunned the home side with an equalizer 4 minutes later when Tom Patrick was put through 1 on 1 but dragged his shot wide. That was costly, as a few minutes later Callington all but killed the game off with a 2nd. Tom Moody ran at the Mousehole defence and skipped past a few piss poor challenges and curled a shot that was actually well saved by M’hole goalie Tim Coates. He couldn’t hold the shot however and Mike Lucas had a tap in. Could it get worse for the away side? Yes it could! 3 minutes later a brilliant deep cross was launched into the box and Francis powered a header past the goalie and that really was game over. Callington just kept going and should have had their 4th right on half-time. A cross that came in was hopelessly dealt with by Mousehole’s Mark Treuail when he kneed the cross onto his own bar and then airkicked the rebound and was extremely lucky that Ryan Lucassi couldn’t finish. It was 3-0 at HT and it could have been much more. 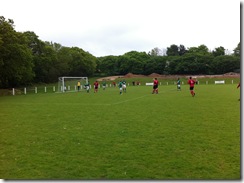 2nd half kicked off with news that Camelford were romping home against Vospers Oak Villa and were 6-1 up at one point. Callington, just kept going although Mousehole actually showed some fight in this half with some long range efforts that could have troubled home goalie Tom Beman if they had been on target. After that it really was one way traffic as the home side had around 35 minutes of near domination. I spend most of the 2nd half in the company of Callington’s Secretary, Nick Smith, who was extremely nice and was chatting to me about the club and the infamous Camelford game. In the end, Callington only scored 4 goals in this half, but if it wasn’t for M’hole goalie Coates, it really could have been double figures. Best summed up by away defender James Tonkin who overhearing Nick Smith stating that he wanted to see 10-0, responded by saying, “it should be 15-0.” Excellent. #4 was scored by Francis who curled a free kick straight in after help from Treuail who sliced his clearance behind him. It was 5-0 on 64 minutes when M’hole again went to sleep at a corner and then when the ball was worked in, Lucassi had a free header but the defender could not stop the ball going over the line. 5 became 6 just four minutes later when Lucas scored with his cock after M’hole cleared the ball straight to it again from ballsing up a corner. And it was wrapped up in injury time when Martyn Hake finished well under the keeper to make it the magnificent seven for Callington. 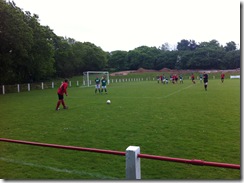 In the end Camelford won 6-4 against Vospers Oak Villa which meant they took the title and Godolphin also won their final game to make sure Callington had to win at Camelford to secure 2nd place and some much needed extra prize money. They also have the Cornwall Charity Cup Final against, Camelford of all people! I really hope they do as well as it was the friendliest club (along with Torpoint) I had come across this season. They played some excellent football and if they keep the main of this team together, they should walk SWPL Division 1 West next season. They could be about to put Callington on the map again, and not just for Ginsters!

Photos from Callington Town vs Mousehole 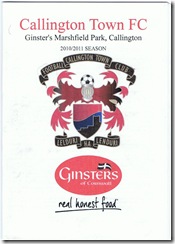