In November, after I watched Lancaster dispatch Ramsbottom Utd in the 2nd Round of this competition, they were drawn away to Radcliffe Borough at the start of January and came out 4-3 winners. I was delighted at this result as the Semi-finals of this competition were being held at the neutral venue of the Lancashire FA HQ in Leyland, with the final still at Bolton’s Reebok Stadium. It was also another welcome opportunity to watch Lancaster City as I had missed their away game at Chorley and did not know if I would make it to the Giant Axe again this season. With it being a new ground and one that isn’t used that often anyway, that was an even bigger bonus. The draw had sadly though given them the toughest team left in this competition, in Southport, who play 2 divisions above Lancaster in the Blue Square North, and were in 2nd place in that division looking for a return to the Blue Square Premier. Although Southport aren’t actually in Lancashire, they had beaten two Cumbrian teams to get to this round, in Holker Old Boys and Barrow AFC. With Lancaster riding high at the top of the Unibond Div 1 North, it was an intriguing game and I made the short trip down the M6 to Leyland. 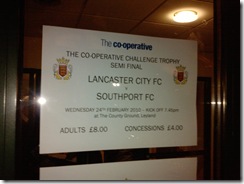 Leyland is a small town in Lancashire, just South of Preston. The town is famous for its motor industry roots with BMC, Standard-Triumph and Rover which culminated in British Leyland. Although BL was broken up in the 80’s, there is still a motor presence in the town with Leyland Vans and the Motor museum which is situated right behind the LFA Ground. Leyland is also home to Chicago Town pizzas with the Schwan Food Company having its base in the town. Arriving at the ground fairly early, a large car park meant it was easy to park up and take a few pics before buying my ticket. Sadly no student discount here (I only have a few months left!!) so the full £8 it was. I had heard mixed reviews of the County Ground with some calling it “the most soul-less ground in England”, with others saying its not too bad. I think its actually an ok ground, with one main seating stand and the rest hard standing with it being railed off. There is cover behind one goal with the other goal having some great grass banking behind it. The LFA HQ runs down the side of the pitch with a balcony allowing some people to view the game from above. 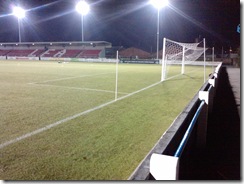 There currently isn’t a pyramid side in Leyland after Leyland Motors FC left the league in 2001. However Bolton Wanderers reserves use the ground who play in Premier Reserve League North Division as well as the LFA representative and youth teams as well as LFA Cups, which included this trophy. The holders were Skelmersdale United, however they had pulled out and so both of these teams had a decent shot of winning the trophy and a day out at the Reebok Stadium. The other semi-final had finished 2-1 to Clitheroe when they played Leigh Genesis, so the winners were taken on our good old friends the Lancashire Clit Heroes in the final, a very winnable game for either side here. Southport had also the luxury of not playing the previous weekend and seeing their title rivals Fleetwood Town go down to a shock defeat to Gainsboro. So their manager decided to put out a 1st XI for this game in preparation for their weekend fixture at Corby. This made the tie even more interesting as it would be great to see how well Lancaster could cope with a first XI who play at two levels higher than them. 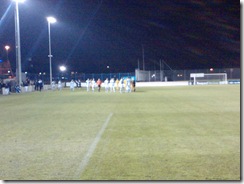 The game kicked off with both sides not really using the well kept pitch at Leyland and resorting to the long ball game, as both sides tried to settle down in front of a fairly decent crowd too. It was Southport however who made the expected early running as they were getting behind the Lancaster defence a little too often for the Lancashire’s team liking. They also thought they had taken the lead when Daniel Lloyd’s free kick was bundled in at the back post however, the Southport player had strayed offside and Lancaster breathed easy again. It didn’t last long though as another great cross from the right hand side, this time from Robbie Booth, and everyone in the ground heard Lancaster keeper Martin Fearon’s shout of “GOALIES!”, everyone except Lancaster defender Michael Stringfellow who headed the ball back towards the empty net…… 1-0 Southport. A calamity own goal. Lancaster started to fall apart after this shock and Southport upped the pressure and began to create more chances to test the defence in white. Every ball that came into the Lancaster penalty area was met with the shout of “Goalie!” from the Southport fans behind the goal, but it seemed that Lancaster had recovered until they only have cleared a corner and Adam Flynn’s shot was flying wide behind a pinball effect in the area so it hit about 3 players before finally going in. No idea how Flynn has claimed it, but fair play to him. The game looked all but over on 39 minutes when another well worked move down the Southport right and Paul Barratt’s cross was “handled” by Andrew Teague in the penalty area. No idea how he saw this, but who am I to argue. Steve Daly easily dispatched the penalty to give ‘Port a 3-0 half-time lead. 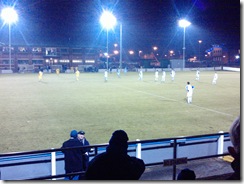 For the 2nd half I moved around to sit in the only Stand in the ground so I could get a different view of the action and this half was instantly all about a Lancaster comeback as they started to create chance after chance as they just went gun-ho and attacked Southport. While they pushed men forward however, Southport could (and did) use their pace to counter attack which made it an exciting half of football. Quite easily the best I’d seen all season. Lancaster should have pulled one back earlyish in the 2nd half when a great cross from Paul Jarvis found Mike Rushton just outside the 6 yard box, but he flashed his shot high and wide, when it seemed easy to get it on target. The changing point of the 2nd half came on the 69th minute, when Lancaster striker Jordan Connerton (who was being watched by scouts from Football League clubs) was subbed for Mark Jackson, and it was Jackson on 75 minutes who managed to turn his marker in the box before rolling a shot into the bottom corner to make it 3-1. That kicked off the craziest 15 minutes of football I had ever seen, with both sides just proper going for it in an attempt to get to play at the Reebok. Southport made it 4-1 and again seemingly out of sight of Lancaster when a counter-attack saw 3 vs 1 and Chris Simm finished the move off despite the best efforts of the last ditch attempt to clear the ball off the line. Lancaster weren’t done however though as Andrew Teague then played upfront and latched onto a through ball to smash past ‘Port goalie Sean Lake. It was nearly 4-3 when a Lancaster cross caused mayhem in the ‘Port area and a header was only just cleared off the line. Had that gone in, I reckon Lancaster could have grabbed a sensational equalizer and given us another 30 minutes of entertainment. In the end however, Southport added a 5th in injury time when Robbie Booth tapped home from a cross from the left. 5-2 it finished, a great game and Southport vs Clitheroe would be the Co-Op Trophy Final. 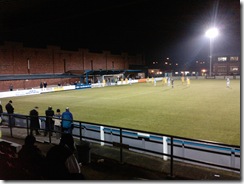 This game was just sheer great entertainment and only for £8. Easily the best 90 minutes I had seen all season. Its a shame that Lancaster didn’t make the final, but Southport vs Clitheroe at the Reebok should be a great game. I won’t be attending so a visit to the Reebok will have to wait. The ground at Leyland is really not that bad, and if a club from the town can be founded, then surely they will have a great ground to play at, for now only Bolton Reserve games and the occasional semi-final/final will have to do for now. Good luck to Southport for the final, and hopefully Lancaster can now push on in the Unibond to win promotion to the Unibond Premier. Here’s hoping!

Photos from Lancaster City vs Southport

- Food: 3/10 (while the pie at the time was nice, throwing it back up in the middle of the night was not) 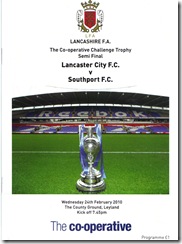