This was it. A competition that started on August 14th and finished on 14th May. 759 clubs were accepted to play in this years competition and it had now been narrowed down to the final two. Stoke City (in their first ever final) and Manchester City (their 9th final, their first since 1981). It was very much a clash of rags v riches as Stoke (who are fairly wealthy) came up against The Richest Club in the World. The manager’s who were going up against each other was also a clash of cultures with suave Italian Roberto Mancini with brash Welshman Tony Pulis. 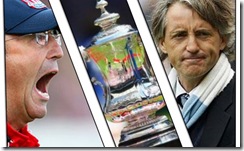 I’ll be blunt straight away, this final was shite. It really was one of the worst finals I had seen with Man City not having to play all that well because Stoke City never turned up. Yaya Toure scored the only goal of the game on 74 minutes to secure a deserved win for Citeh and their first FA Cup since 1969. Stoke offered little and only Kenwyne Jones had a clear cut chance for Stoke but it was saved by Joe Hart.

This though was more about the journey from August all the way through to May as I kept up with the winners of Elmore vs Hamworthy United and worked the way through morris dancing, record breaking runs, baths, Clint Eastwood, some Welsh blokes and a derby before capping it off with Citeh’s win.

I really have enjoyed this feature this season so have decided to continue it in some way for 2011/12. But do you know what would actually be better than watching the final on TV? Being at Wembley for the final! The road begins now… (When the draws are released)