Being up in the North-East for some quality New Years time with my girlfriend gave me a chance to yet again take a sneaky look at some games on in the area that I could toddle off to on the only Saturday I was here and get another “bonus tick” this season. Having spent a lot of time in the lower echelons of the English Football Pyramid recently, I was looking higher up at Gateshead’s game against Kidderminster and then Darlington vs AFC Wimbledon (Darlo wanting £18 to watch that!!) but when I noticed Newcastle’s lovely red and white friends from over the Wear, I decided to get a rare 92 ground in and head to Sunderland. 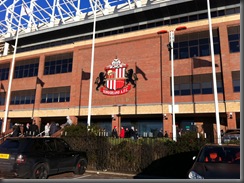 Sunderland is a major city in the North-East (probably 2nd to Newcastle although they’d hate to admit it!) Historically part of County Durham, there were 3 original settlements on the site of the city today. Monkwearmouth, Bishopwearmouth and the port of Sunderland were all around when Sunderland was granted a charter in 1179. Sunderland then became a major port trading coal and salt before the ship building really began to take off in the 14th Century. This is quite possibly where the nickname Mackem comes from as the Sunderland dockers would make the ship (mack em’) and then the Newcastle dockers would take it away to be fitted. (tak em’) However looking at a study complied by the Oxford English Dictionary – the earliest time Mackem has been seen in print is 1988, which suggests that the shipbuilding nickname story is a Geordie fishwife tale and is probably bollocks. Today, Sunderland has seen a mass amount of regeneration work under the ambitious UDP (Unitary Development Plan) to try and seen a modern Sunderland into the 21st Century. New industries such as the Nissan Car Factory will help as will modern developments such as The Holmeside Triangle and of course the area surrounding Sunderland AFC’s new(ish) ground. 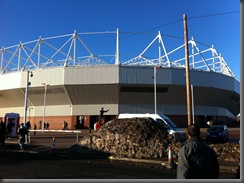 The Stadium of Light has been home to the Mackems since 1997 when they moved from their dilapidated Roker Park as a result of the bureaucratic’s wet dream in the Taylor Report. The SOL is now a 49,000 capacity bright light of the NE as its one of the most atmospheric and best loved grounds in the Premiership. There is also room for expansion up to a massive 64,000 capacity (which will then see the SOL be bigger than St James Park down the road) but that would need to wait until Sunderland were title contenders most likely. That being said, this season is shaping up to be a very good one for the Mackem’s and they were in 6th place in the Premiership going into this FA Cup game. I managed to blag a seat (although in the end I could have just sat anywhere judging by the amount of spare seats!) in the Premier Concourse which provided me with an excellent view running down the pitch for only £15. Although every seat for adults was this price, that didn’t stop Sunderland fans not turning up in their droves as the attendance for this game was around 20,000 down on their current season average. 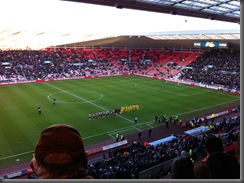 League 1 Notts County on the other hand were really up for this and all but filled their 3,000 space in the South Stand behind the goal Sunderland would be attacking in the 1st half. Notts County – the lesser Nottingham side (you are, lets be honest), have had a turbulent couple of seasons and this one has been no different either. I predicted back in Summer 2010, that taking on Craig Short as manager was a risk that was only going to backfire and Short was unsurprisingly sacked in October and the horrid, abortion of a man, Paul Ince was appointed soon after and has taken County to the reasonably high position of 14th but only 7 points off the relegation zone. I don’t mind Notts County as a club, in fact I have no real opinion of them at all, however I despise Paul “lets play the race card to get me a job” Ince and after being a shit for most of his footballing career, he is now a big manager shit and his very face just pees me off. Luckily I was sat behind the dugouts and far enough away from his face to not annoy me as much. 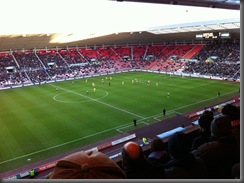 Considering Sunderland had a real good chance of progressing quite far in this competition, I was surprised to see Steve Bruce had played a weakened side for this game which would have surely added fire to the Notts County desire to win this game. I was disappointed that the World’s “3rd Best Goalie”, Craig Gordon had not even made the bench with relative nobody Simon Mignolet starting in goal and after a relative open start from both sides, on 5 minutes he was center of attention. When Craig Westcarr flicked the ball on towards goal, Mignolet looked like he’d easily catch it. However he was barged out the way by a combination of Lee Hughes and a Kieran Richardson to give County a shock lead. From where I was as a neutral, this looked all the World to be a foul and even the County players waited on a whistle before celebrating. Sunderland fans around me were a bit peed off but felt that they would come back into it over the remaining 85 minutes. Those fans were in for a shock however, as Notts County just battered Sunderland and Alan Judge and Ben Davies in particular causing the home side all sorts of problems. Sunderland, amazingly nearly grabbed an equalizer which would have been a travesty when Andy Reid fired just wide after good work from Gyan. Notts County almost snatched a 2nd right on half-time though when Sunderland failed to deal with the ball in the air, again and Craig Westcarr forced a brilliant, low save from Mignolet to keep Sunderland in the game at HT. 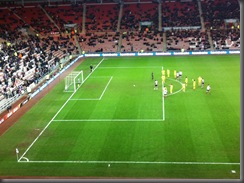 Sunderland made no changes for the start of the 2nd half and the continued incompetent display from these “players” really started to piss off the locals who began to make their anger known after more mis-placed passes were in evidence. The first 15 minutes of this half was a non-event as everyone in the ground could see that County were comfortable and Sunderland would need to make changes. These came on the hour mark when Jordan Henderson and Ahmad Elmohamady were thrown on and started creating chances when Steed Malbranque sliced his shot just wide and then Darren Bent missed a good headed chance as Sunderland upped the pressure. Then in almost laughable circumstances, County went up the other end and scored when Lee Hughes converted a deflected pass after his first shot was well saved by Mignolet. Two Sunderland defenders desperately appealed for offside, despite them being stationed on the goal line. Learn the offside rule lads. The vast amount of County fans were really making themselves heard now with “LETS ALL DO THE HUGHESY! LETS ALL DO THE HUGHESY!” in response to his well-known dance goal celebration. Amazingly though, Sunderland pulled a goal back when Darren Bent converted a penalty after Andy Reid had been barely touched in the area, but the referee was probably thinking of the neutrals who wanted a big finish – good man. In fact Bent had a golden chance on 90 minutes when he had a free diving header but could only fire it over the bar. And with that, Notts County were through and we had a cup shock! 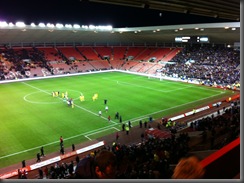 Sunderland fans moods were lightly lifted later when near neighbours Newcastle could only crash 3-1 at footballing giants Stevenage but it didn’t hide the fact that Sunderland’s B-side are so poor. A lot of these players will probably rarely play for the club again as the first XI can breathe easy at the lack of competition. Since this game (sorry its been so long) – Sunderland snatched a barely deserved point in their derby against Newcastle and now top scorer Darren Bent has joined Aston Villa for a mindblowing £18m. He will be replaced (it appears) by Ricardo Fuller who is on his last legs as all the major news outlets have stated he would fail a medical. As for Notts County, they can look forward to a money spinning 4th Round tie at home to rich boys Manchester City which has also been picked for live TV. For me, it was good to see a game in the NE and good to pay a reasonable amount of money for it too! As for the city centre of Sunderland, its a bit of a dump, eh?

Photos from Sunderland vs Notts County 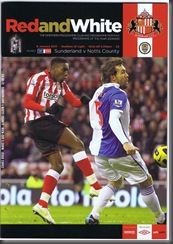