Although I do travel around Devon and Cornwall watching the local leagues and levels most people wouldn’t even dream of touching, I had ignored completely a league that was right on my doorstep. Yes, I had visited 3 grounds used in the North Devon Leagues, but had never been to a league game in this 4 tier league. I had also never visited the closest ground to my current home so I decided to kill two birds with one stone, or game as you will, with a cheap visit to Torridgeside FC and their Donnacroft home. 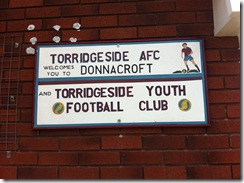 Torridgeside FC (along with their Youth side, aptly named Torridgeside Youth) play at the Donnacroft complex on the East side of Torrington, in North Devon. They have two pitches that run parallel to each other (with a small gap in between) to give it a decent feel about the place. The main pitch is railed off on the dugout side and roped off down the other. The main pitch is also next to the changing room blocks and a tea room along with some storage boxes. This means it does have a footballing place about it (rather than a village side playing on a field) and little work would be needed on Donnacroft (in my opinion) if they ever wanted to make the step up to the Southwest Peninsula Leagues. The secondary pitch is basic but with dugouts and Torridgeside Youth have their own pitch which is gated off from the rest of the complex (see other pictures). Donnacroft is also home to Torrington RFC who play on a nearby rugby pitch and as I had to walk through the rugby section to get to this game, I noticed they were issuing programmes so a cheeky trip to them could be on the cards! (They beat Saltash 23-17 FYI) 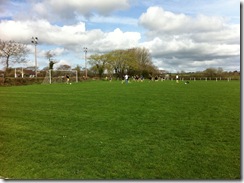 Torridgeside are the 2nd team who play in Torrington, along with their neighbours Torrington FC who play in the village at Vicarage Field. Now they are both in the same division, the town’s local bragging rights are at stake and although Torridgeside are well above Torrie in the table (5th vs 11th), the “Super Greens” did dispatch Torridgeside 3-0 at Donnacroft last month. To avenge the 2-4 defeat at home in September. Strangely a 3rd Torrington team, the Torrington Admirals (see other pics) played here too until the 2009/2010 season when they pulled out of the league. The sole Donnacroft side are now heading towards the right end of the top tier in the North Devon Leagues going into this game in 3rd. (Albeit having played a fair amount more of games than the teams below them) Last season Torridgeside came a lowly 13th (out of 16) picking up 23 points but stayed well away from the relegated clubs due to the fact they were both rotten. With 11 more points already picked up, this season was infinitely better than the last but with the top dogs BOCA in town, this game was going to be a real test… 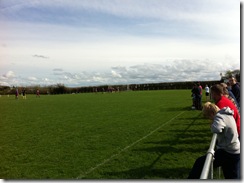 BOCA, since I witnessed their infamous 7-1 whooping of Exmouth Town at the tail end of 2010 have not stumbled at all since their surprise defeat at Barnstaple AAC, in September. With 16 games played in the league going into this game, they had won 15 and with that 1 defeat looked certain to re-take the title they had lost to Shamwickshire Rovers last season. Since that 7-1 win, they did lose in the QF of the Devon Premier Cup going down 1-3 to Budleigh Salterton but from the accounts of the game I had read, they were extremely unlucky to lose in extra-time. They had also crashed out of the Torridge Cup, again at the QF stage when they went down 5-4 away at Hatherleigh Town. Apart from those cup blips, BOCA have really been unstoppable this season and going into this game needed 7 more wins for the title. I had been quite disappointed with BOCA’s attitude in the previous game I saw them in but I’m all for giving teams and people 2nd chances so I looked forward to this game. (It had been in my “diary” since January!) 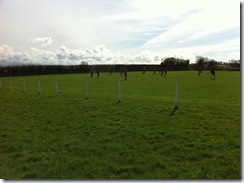 When the game kicked off in glorious sunshine it was quick to see why BOCA are where they are. Extremely positive football right from the start, Richie Joslin forced an excellent low save from T-side goalie Adam Williams. BOCA really dominated the early chances and had the majority of possession so it became early on just a case of seeing how long Torridgeside could hold out for. On 13 mins, Williams made another excellent save, reacting well to a deflected shot that was heading in. It looked like T-side had done their homework as they sat deep and did not allow BOCA the space to easily string their passes together. Still at 0-0 midway through the half, BOCA were becoming frustrated and they nearly went 1 down on 33 minutes when some excellent one touch football had the BOCA defence peddling back, but the T-side striker fired his shot over. It showed the BOCA defence could be got at and would give T-side a spring board to go on if they got to HT at 0-0. Sadly, they didn’t. On 41 minutes they conceded a corner that was taken short and as nobody pressured the BOCA winger, his ball in found an unmarked Lewis Ovey who had an easy header to make it 0-1. A ridiculously simple goal to give away and as someone who despises short corners for the reason they never work it also made me annoyed to see a goal given away like that. T-side looked visibly deflated at HT and needed picking up for the 2nd half. 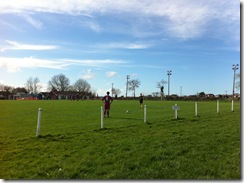 BOCA clearly said at HT to try and finish the game off with a 2nd (and possibly 3rd) goal as early as possible as their superior fitness began to overpower T-side. The home team were getting picked off far more easily in this half as they could not clear their lines properly to mount any sort of attack at all. Ironically though, BOCA’s 2nd goal on 59 minutes came from a counter attack after T-side had lost the ball in the centre of the park. Some excellent play on the right hand side found Scott Sharp in the box and he laid the ball off to Matt Deakin who fired his shot low into the opposite corner to kill the game off pretty much then. Or so I thought, T-side showing they could still threaten as Nathan Walter went on a run and skipped past the BOCA defence only to see his shot saved by Babb and onto a post. On 67 minutes it was well and truly game over. Jake Crush received the ball on the left and got to the by-line where his low cross was just out of reach of Williams as Sharp nipped in for a tap in and #3. T-side’s shape began to go as they lost heart for the last 15 minutes as BOCA went in search of more goals. #4 came on 76 minutes as again a cross came in from the left which found James Davy who had just come on and his flick rolled past Williams and in as BOCA gave the scoreline some gloss. T-side still threaten to end BOCA’s clean sheet and Babb again had to save well from Walter as he was put through 1 on 1. Yet with the very last kick of the game, Crush yet again from the left got the ball into Davy who swivelled on the ball and lashed it past Williams into the top corner. 0-5 the final score. 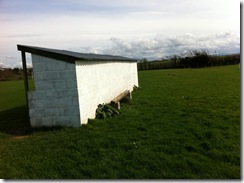 I really enjoyed this day out at proper grassroots football as some excellent stuff was played by both sides. Torridgeside lost heart and so lost 4 goals in the 2nd half which they will have to work on in the future, but the do look a club on the up. As for BOCA, I’ll take back some of the harsh words I said about them when I last saw them in December 2010. This game was tougher for them but the off the ball stuff and bad temperament had gone. A couple of the T-side regulars moaned that BOCA moan at every decision that goes against them and I have to say, they do, but no more than other teams. And certainly not as bad as the professionals do. BOCA are now 6 wins away (presuming Appledore Reserves win all of their remaining games) but there is a problem in N.Devon. I feel that another couple of N.D sides desperately need to make the step up to the Southwest Peninsula Leagues and join Appledore’s 1st as this would improve the game locally. There is the argument about costs and expenses, etc as well as would the grounds be accepted for promotion (BOCA’s for example would be unlikely to without improvements and I don’t know if they are allowed to do that at the Tennis Centre) but a team needs to try in the near future. The 2 Torrington teams would pass (in my eyes) the ground criteria most likely but they don’t look likely to finish in the Top 2 of this league anytime soon. We’ll have to see what the future holds.

Photos from Torridgeside vs BOCA Seniors