Ah May, the time of year when football fans’ dreams regardless of what league you play in come true, or for some, its nightmare time. For me, May is all about revision and exams and this being my final year at uni, May 2010 is no different, its one of the reasons why I decided to dip into this Division for game # 80 and to rack up the half-century of football grounds visited. The West Lancashire Football League is situated from Levels 11-13 in the English Pyramid and features not only clubs from Lancashire, but from Cumbria, Great Manchester and even Merseyside. The league has seen some of its clubs rise up to higher levels with AFC Fylde (although known as Kirkham & Wesham FC) leaving in 2007 and last season Barnoldswick Town left to join the North West Counties 1st Division (where they have been promoted again this season). For the clubs remaining in the WLL, this season’s Premier title had been won by Blackpool Wren Rovers already, taking the title from last year’s winners Charnock Richard (see why I chose this game? ;) ) Therefore it was a short drive down the M6 with a cheeky (and maybe slightly illegal) exit at Charnock Richard services to arrive at the ground in good time. 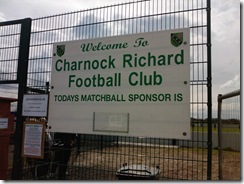 Charnock Richard is a small village just South of Chorley in Lancashire, with a small population of just under 2000 people. Local highlights include the service station (yes, really) which was the first services to be built on the M6 when it opened. Also Camelot Theme Park is situated close by which is a struggling theme park based on the knight’s of the round table. There isn’t really much else there in that sleepy Lancashire village, so the football team, which has enjoyed some success of late is a vital part of the community. Playing at Mossie Park, Charnock Richard have plans to leave the West Lancashire League at some point in the future, and recent performances have suggested that they could easily make the step up to Level 10 and the 1st Division of the Northwest Counties League. They won the WLL last season and although have seen their title slip away to Blackpool Wren Rovers this time out, they were still in a respectable 5th position (out of 17) and had suffered a points deduction earlier in the season. They also reached the final of the Goldline Trophy this season before cruelly losing at the Reebok on penalties to Atherton L.R. 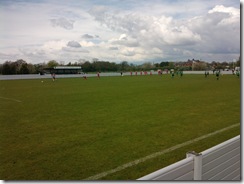 Also, unlike a lot of WLL grounds I’ve heard about, this one actually seems quite a decent standard and setting for Level 11. The main pitch at Mossie Park has recently (2007 I think) been moved across the road to a new complex (see the picture above) which has hard standing all the way round, and a small seated stand in the middle which does provide a wee bit of cover. Across the road, is the “old” Mossie Park which is still used as a game was taking place while this main event was happening, using Charnock Richard’s A’s in their Preston & District League clash (see extra pictures). Next to this old pitch was the clubhouse which was open for the game and was a fairly smart clubhouse with Brum vs Burnley showing on the screens. Mossie Park needs improvements to make the ground grading for NWC League, however Charnock have also stated a wish to one day play in the Northern Premier Division which would mean extensive work including more stands and floodlights – obviously this is a long term project, but it will be very interesting to see if they can reach that league. 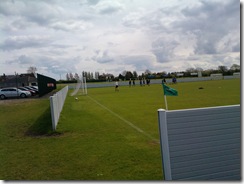 The visitors for this game were (as I mentioned above) the new champions of the West Lancashire Premier, Blackpool Wren Rovers. Having dropped back down to the West Lancs League in 1998, following some time playing in the NWC League, they have won the 2nd and 1st division and have played in the Premier Division since 2001/02. According to Charnock’s programme, this will be Wren Rovers’ 1st Premier win since 1970/71. The meeting between the two teams earlier in the season (in August) had finished 5-1 to Wren Rovers and so CR were looking for some revenge in this game. The game kicked off with a decent crowd (I counted 95, but official attendance was 84) and saw some great early action as BWR had an early corner headed over after just 3 minutes as they looked to attack Charnock. Although Charnock were still in the game, BWR then went and took the lead after 22 minutes when some great work when Danny Rowe played an unselfish pass into Steve Creelman who scored his 21st of the season to put the Champions-elect 0-1 up. Two minutes later it was almost 0-2 when another through ball saw a lob shot just saved by CR goalie Kevin Baldwin. CR though did manage an equalizer out of nothing when a through ball was played to Carl Grimshaw who saw his shot saved by the BWR keeper, but he seemed to spill it under pressure and allowed Grimshaw to stab home the equalizer. The final chance of the 1st half came right on half-time when a well worked free kick saw a header just flash over from CR as both teams went in level at the break. 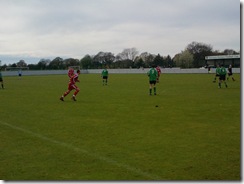 After taking in a sausage sandwich at half-time the 2nd half kicked off with the wind chill slightly effecting everyone there as it was a wee bit nippy now, and I hadn’t brought much of a jumper. Chances were few and far between early on as it seemed certain that this game would end 1-1. A BWR player did go on a mazy run after 50 minutes when he skipped past two players before his weak shot was saved by Baldwin. While CR created a good headed chance but it was flashed wide of the target. The game’s third goal was scored on 74 minutes when a great worked counter-attack saw BWR winger Jack Sharples cross low into the penalty area and Nick Corless managed to smash the ball home despite CR’s best efforts to get the ball clear. CR then bombarded the BWR goal and did managed to score a superb equalizer late on when a great 1-2 was played and Jimmy King saw the ball spin up and he volleyed over the onrushing BWR goalie to snatch a draw. It was nearly 3-2 when a corner was not cleared and CR saw the resulting header hit the bar. Unlucky, but the final score of 2-2 was a fair result. 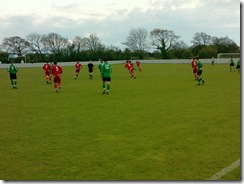 Its a shame that as I’m about to leave Lancashire (in theory) that I have only just discovered this league as the quality was great considering it was Level 11. It will also be interesting to see how far Charnock Richard can go up the football pyramid and the future improvements Mossie Park is likely to see. Who knows when my next WLL game will be, but I look forward to it whenever that is. As for me, its only 1 more game left in the 09/10 season. And its a final farewell to a loved Northern Ground.

- Ground: 4/10 (basic at the moment, but will most likely see improvements) 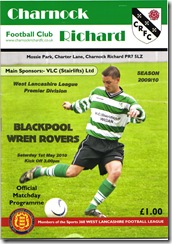 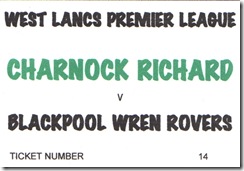