Sometimes, and I stress sometimes, there are upsides to living here in the deep Southwest. While I was hearing and reading horror stories from other football fanatics that they hadn't seen a game in a month, during the recent cold spell, there had been a trickle of games always on in Devon & Cornwall and the the 27th December was no different. It wasn’t my first choice at Cullompton Rangers but when I heard that Bodmin’s derby against local town Wadebridge had beaten the cold this was a no brainer. Down to Cornwall! 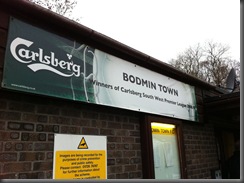 Bodmin is a major town in Cornwall situated just a wee bit away from Bodmin Moor. It was the county town of Cornwall until Truro took that mantel away from them and the County Courts too. The town was founded by St Petroc apparently when he set up a monastery in the town in the 6th Century. It is also the only Cornish settlement to be recorded in the Domesday Book in the 11th Century. Bodmin has always had something going on, from the Black Death wiping out 50% of its population to 3 Cornish uprisings. (Probably due to the lack of pasties one morning) Today, Bodmin has such sites of interest as the Bodmin Gaol, the first prison to hold prisoners in separate cells, the Shire Hall and of course, the Beast of Bodmin – a wild panther like cat which apparently exists on nearby Bodmin Moor. (It doesn’t) 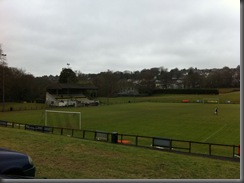 While the weather was fine in Cornwall, the same could not be said in icy Devon where I could only get to this game after my parents had pushed me out of the carpark. (Name check!) Upon arrival at Bodmin’s Priory Park I was a bit surprised to see how basic the ground was as Bodmin are arguably Cornwall’s 2nd best team (behind Truro) after their recent successes. As you can see from the picture above, the main grandstand at Priory Park dominates in the ground (mainly as its the only thing here) while the rest of the ground is uncovered, hard standing. Behind where I stood to take this photo is the clubhouse which was quite reasonable inside and the car park. As it was peeing down I took the sensible option to sit in the big stand which Bodmin then charged me an extra £1 to sit in, really Bodmin? £5 in at Level 10? 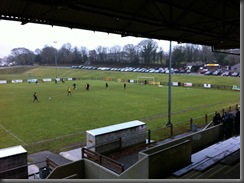 After being big guns in the South Western League and winning the title in 2005/06, they started where they had left off when the new Southwest Peninsula League was set up for the 2007/08 season. They won the Premier Division twice in the 1st two seasons and even picked up the League’s Throgmorton Cup during those two seasons too. Despite last season the Cornwall club relinquished their title and cup to Buckland Athletic, they still managed to win the Cornwall FA Senior Cup after beating Camelford in the Final. Going into this game they were in 4th place and 6 points behind leaders Buckland, however Bodmin had 2 games in hand and Buckland’s game against Bovey Tracey being called off, the Cornish side had the chance to close the gap. Their rivals from just down the other side of the A389 were having an absolute disaster of a season. Wadebridge Town were bottom of the league and had only picked up 8 points from their 1st 18 games, being 6 points away from 18th and safety – Cullumpton Rangers. The fact that Wadebridge were looking at playing in SWP Division 1 West next season and the fact they hadn’t beaten Bodmin since 2003 meant the home side were overwhelming favourites for this one. 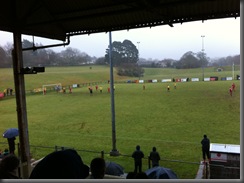 As the rain had showed no signs of relenting at kick-off, football along the floor became extremely hard to achieve as it began to look like a Cornish version of “It’s a Knockout” with both sides slipping and sliding everywhere about the place. In fact the Wadebridge goalie even fumbled a tame shot early on. Fun and spills at Priory Park! When Bodmin did get going they unsurprisingly caused Wadebridge problems as Wade goalie Josh Grills saved well from a Bodmin header. And apart from a Bodmin corner flying straight onto the bar that was it for the 1st half. After my 0-0 bore draw at my previous game seeing Cockfosters, I was a tad concerned about the score being 0-0 at HT here as neither side really looked like opening up each other. That all changed 5 minutes into the 2nd half when Sam Matthews slipped Danny O’Hagan through and despite the whole ground noticing he was offside, he rounded the keeper and opened the scoring. Understandably Wadebridge were not happy with this and had surrounded the referee and assistant as soon as the ball had hit the net. Wade nearly had an outstanding equalizer on 57 minutes when a free kick some way out was only kept out by a tremendous save from Bodmin keeper Kevin Miller. Nothing else of note occurred until 81 minutes in when a Mark Berry corner was easily headed in by O’Hagan. That was game over and Bodmin played out the last 10 minutes in comfort. 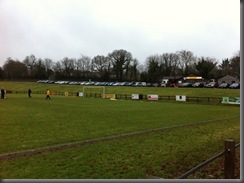 I had actually planned a potential visit to Bodmin in January but when this was the only game on in miles, Bodmin had to be done. I was surprised at Priory Park and how basic it was. To be honest, it needs a bit of TLC as its currently a bit of a dump. That being said, it was nice to get to another Cornish ground and end 2010 with a decent game to cap of a great year for me football wise. Happy New Year! 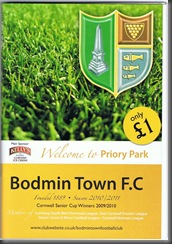 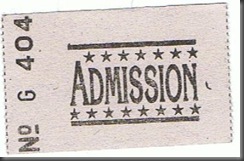