Firstly, I didn’t make Morecambe on Sat 12th but never fear Christie Park lovers! I will be doing a special “Goodbye to Christie Park” in May. As for my first game over Christmas in Devon, it proved that no matter what you plan and hope will happen, someone or something will normally p*ss all over it. Plan A was Witheridge vs Cullompton Rangers but that was shelved when Witheridge decided to play the game on Friday night (18th). Ironically the game was then called off for a frozen pitch – serves them right. Nevermind, Plan B was Bickleigh vs Exeter Civil Service, a slightly desperate game to choose, but I wanted out the house. Problem solved on Friday night. Saturday morning and having snowed in Devon, that game suffered the infamous “P” and left me with an afternoon in or go slightly further afield for a game. In the end I chose the Somerset coastal town of Minehead for their bottom of the table clash against Wiltshire based Devizes Town. Massive. 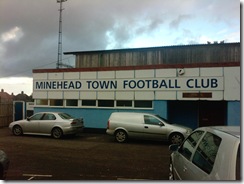 Minehead is a small coastal town close to the boarder with Devon and Exmoor National Park. A touristy town by nature, the main “highlight” is the Butlins holiday camp that loads of people flock to if thats your thing. Throughout history Minehead has also been used as a port, primarily trading with Wales in such items as wool, butter and sheep. (No joke) The local team, Minehead FC were a massive non-league side in the past, for example they finished 2nd to Wimbledon FC in the Southern League in 1977, when Wimbledon were elected to the Football League. Since then, the only way has been down for the seaside team and they have found themselves playing in the Western League 1st Division since 2001, where they have never finished higher than 17th and last season they came rock bottom. The ground is a strange one as its essentially a public park (or Recreation Ground) with one massive stand which is fairly old and the clubhouse built underneath it. The rest of the ground is railed off with no paths, just grass and children’s play areas surround the ‘ground’. The visitors today were a side in more of a mess than Minehead, Devizes Town. The Wiltshire side had been relegated from the Western Premier last season and high fairly high hopes of mounting a return, however an appalling season so far saw them bottom of the table with just 8 points from 18 games, Minehead only 1 place and two points above them. A big game was on the cards. (Forgive me for trying to hype this) 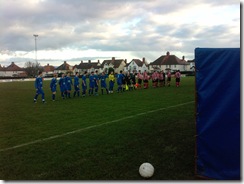 Early on it was clear that the quality would be lacking from both teams as hoof ball was in order for 90% of the passes. However, while the quality was low, the commitment was extremely high which is all you can ask as both sides started to create chances. Minehead struck first when Neville Southall look-a-like (but add 20 stone) Scott Armstrong had to chase a good throughball and smothered well from the onrushing Minehead striker. After that however, it was all Devizes as the theme of the game began to become clear. The strikers were crap. Chance after chance came for the Wiltshire team as one on ones were missed or an awful final stopped the away side taking the lead. The referee was also beginning to lose control of the game that could have been stopped with a showing of a yellow card, but it stayed in his pocket as both sides began to get frustrated, mainly due to their awful inability to finish. The best chance of the half fell to Minehead when a free kick was only cleared to a Minehead striker on the line. Wahey! A goal, surely! Only for the big goalie to make a great save, but that really should have been 1-0. HT came and went straight to the clubhouse with a bovril (hardcore) to keep warm. 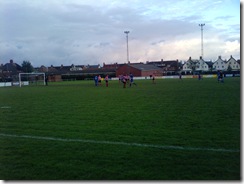 The 2nd half began with the exact same pattern as the 1st, with all 63 spectators screaming inside themselves as more chances were created and more chances were missed. The fear that this game would finish 0-0 came around the 55 minute mark when Devizes hit the bar twice and had 2 shots cleared off the line in the space of 30 seconds. A goal did finally arrive and I would like to take some credit for it as the ball went out for a throw in I walked over and picked the ball up and passed it to the Devizes player when Minehead were still arguing over the award of the throw in. Devizes took the throw quickly and a great first time cross found Nathan Moffat who’s header looped over the Minehead goalie to make it 0-1. Chances were still not over as Minehead still managed to miss an open goal and Devizes missed another one on one as the game finished with the one goal. Utterly frustrating, it should have been 8-8. 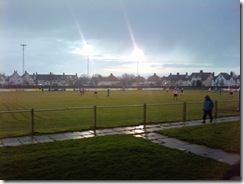 While I was glad to get out the house on the day, I could have picked a far better game than this one, although hindsight is a wonderful thing. Minehead’s ground is slightly strange with it being a public park and the lack of hot food (except a Pot Noodle!?) also wasn’t that welcome on a day that was cold and also welcomed a hail storm too. Minehead are also now bottom of Western Division 1 and will need to improve remarkably and improve fast otherwise its another bottom finish for the seasiders. My next game on Boxing Day was meant to be Wellington and then a trip to Elmore, however Elmore have decided to put their game back to 12:30pm and thats leaves me stuck. So who knows where I’ll be with my turkey sandwiches!?

Photos from Minehead vs Devizes Town 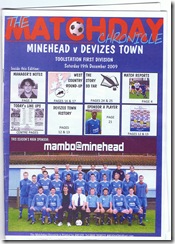