There were a few reasons for coming to this game. Finally doing a blog report on St James Park, seeing Devon’s premier football side before I left for London or some symmetry as I saw Yeovil vs Exeter in a cup competition last season. None of that really mattered though as this took place on the 9th August 2011. 10th August 2010 saw the loss of one of the nice guys in football who had done so much for SW football as a whole. Adam Stansfield. Having a year ago, gone to a ground where he had played early in his career, it seemed only fitting to go and watch a game at the club he last played for during these tough times for his family and supporters of the club and football as a whole. Adam Stansfield, Exeter’s Number 9. 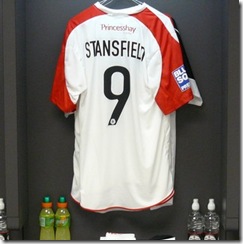 Having already blogged from Exeter’s 3 leading non-league sides in Exeter Civil Service, Exeter University and Alphington, there isn’t much point to doing my normal “Exeter is…” when I’ve written about it in the Civil Service report. I will briefly say that Exeter is a lovely place that is worth a visit if you are down in the SW. It boasts some excellent architecture and a cathedral that is a must see directly in the centre. This post though focuses on the main football side which is Exeter City. Founded in 1904, they have played at their St James Park ground since their formation. They have very little success at the top levels with their only major trophy being the Football League Division 4 (League 2) title in 1990. They have also recovered well from relegation to the Conference in 2003 as they got out of non-league in 2008 with a play-off victory over Cambridge before gaining promotion to League 1 the following season. Under the leadership of boss Paul Tisdale (who is surely destined to manage at a higher level), Exeter seem to have settled as a League 1 side and not many teams enjoy a trip to St James Park – a classic old ground. 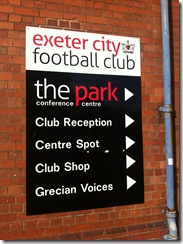 The main focal point of the ground now is the large terrace behind the goal known locally as the “Big Bank” which can hold just under 4000 fans and is the largest stand in the ground. The old grandstand which was a rebuild following a fire in 1926 and it is still a grand old sight despite being a tad small and not running the full length of the pitch. Down the other side is a new all seater stand while behind the opposite goal is the small away terrace which in my eyes is the worst stand (or end) in the Football League. A small uncovered end with a few steps that has been made smaller over the summer with the addition of an emergency walkway right behind the goal and metal fencing half way up the steps which makes the whole end a little tatty and small. It will be interesting to see if the end copes with a big crowd. That being said, Exeter City recently announced plans for an ambitious redevelopment of the site and local consultations have already begun to take place. We will wait to see if this development ever comes off. (Pic below shows artists impression of “new” ground) 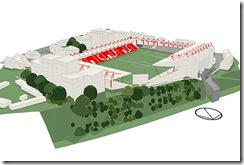 On the pitch, Exeter are trying to improve on a fantastic 8th place last season, just 1 point off the play-offs. They had started their season with a credible 0-0 draw at Stevenage, although they still needed to properly replace top player Ryan Harley who had left the club over the summer to join Swansea City Reserves. Tisdale had brought in Guillem Bauza, Nicholas Bignall (on loan) and Callum McNish among others to improve the squad. They welcomed fellow West Country side Yeovil Town to the Park for this Carling Cup tie who again, are amongst the favourites for relegation. Terry Skiverton will need to use the loan market excellently again to avoid a fight for the drop. Though they did create a new record in the summer though as their signing of Kieran Agard was the World’s first Twansfer as fans told Skiverton about Agard and his availability over Twitter. Yeovil had started their season away at Uwe Rosler’s Brentford and crashed to a poor 2-0 defeat from what I had read on their forum before this match. Like last season when I saw Yeovil vs Exeter in the JPT, I had decided to be a plastic Glover for this game again and stood in the away end, luckily on a sunny evening in East Devon. 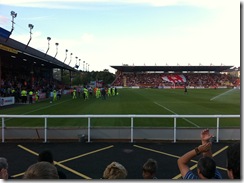 The game kicked off with Exeter easily the better team as they looked faster on the ball and had brighter ideas with what to do with it. After some half chances earlier on, Exeter sparked into life mid-way through the half after Liam Sercombe broke away on the wing to send Bignall through who’s cross was just cleared by Gavin Williams before a proper goalscoring chance could materialize. Then a few minutes later Richard Logan missed a sitter from 12 yards after he side-footed the ball wide when it was easier to score. To make matters worse, Logan also pulled his hamstring and so had to be replaced by Guillem Bauza. The new Spanish signing hadn’t started this game due to fitness worries but seemed to be ok with his first few touches starting some good moves off. Exeter couldn’t find a way through and Yeovil were only lumping balls forward which on the whole, Exeter’s defence dealt with comfortably. My good run of goalscoring games looked under threat currently. The 2nd half was a little more open as both sides went for an opener (which would more than likely be a winner) as Yeovil’s goalie, Jed Steer denied Bignall before Andy Williams got the Yeovil fans all excited as his shot had seemed to go in before everyone behind the goal realised it was the side netting rippling, and not the back. Yeovil had a wee spell though and from a corner had a header from Paul Huntington was cleared off the line. That was as good as it got for the Glovers though as on 63 minutes the home side finally got the opener they deserved. Yeovil lost the ball in midfield and Bignall ran at the Glovers defence and skipped past Paul Wotton and continued his run into the area before running straight into two Yeovil defenders before all were floored. The ball rolled out to Bauza on the left who took a couple of touches before smashing past Steer in front of the Big Bank to send the home fans into raptures and it looked there and then that Yeovil were a beaten team. They would have been just four minutes later when Sercombe blasted over when an open goal was there after good work from James Dunne. Inevitably, Yeovil launched late pressure but the Exeter goal was never really troubled and right on the final whistle, Exeter counter attacked and Tom Nichols crossed low to Chris Shephard who had an easy tap in to send Exeter through to Round 2. For the first time in 18 years. 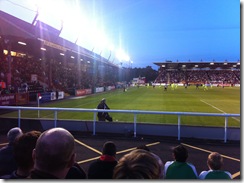 Exeter were hoping for a great draw in R2 and low and behold, the lucky balls paired them with Premiership side Liverpool who will come to St James Park next week (when I am writing this). This game has also been slated for TV and so Exeter should get some excellent gate receipts and some TV money, so good for them. As for Yeovil, I wrote on Twitter right on the final whistle that my prediction for them going down seems to be right, although their 3-1 win over hapless Oldham in their next game will have given them some belief. Ironically, they also now have more points than Exeter who lost their 2nd league game 2-0 at home to MK Dons. As for the game, it was ok but took a while to get going but was an experience coming to St James Park as an “away fan”. That’s also the 3 Devon FL clubs (as of 2011/12!) having had blog visits as I slowly get ready for London clubs. Exeter City and Yeovil Town, we’ll meet again. Don’t know where, don’t know when…

- Food: N/A – was prewarned about the food “quality” – ate in city centre 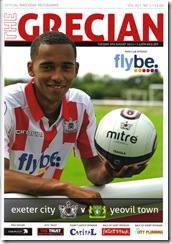 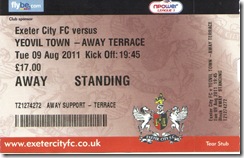