After Radcliffe Borough’s programme no show earlier in the season, it made me think that as long as I could get the goal scorer information and attendance, I really didn’t need a programme always at a game. And so when Devon County Cup day came around, I looked further down the pyramid than I normally would and journeyed to a league that I had sadly ignored until now and with all the grounds within easy driving time of me, it was time to “tick” one off! So off to the small, sleepy, Devon town of Hartland. 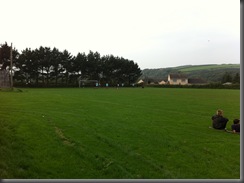 Hartland is a small town on the most South-westerly point in Devon which also incorporates the village of Stoke too. Hartland was an important port, until Tudor times and the Quay was swept away in 1887. Today, ships have the un-used lighthouse and the Church of Saint Nectan to help guide them should they come this way. Apart from that, the town of Hartland is very small and doesn’t have much going on there. 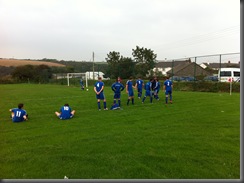 County FA’s up and down the country run many County competitions for all sizes of clubs and Devon is no exception. Devon FA (to my knowledge) run 4 cups for Saturday teams ranging from the big teams in the county, to the tiny village ones. Bottom of this ladder is the Intermediate Cup, then the Senior Cup, Premier Cup and the St Lukes Bowl at the top of the pile. This Senior Cup tie was in the 2nd Round stage and featured two teams from the same level, but in different geographical leagues. Hartland are currently playing in the North Devon Senior Division and sit bottom after 7 games with 6 defeats (all quite heavy) and a 1-1 draw with North Molton’s Reserve team. After being relegated from the Premier Division in 2009/10, it seems that Hartland are currently on a downward spiral and could be playing even lower next season. Their opponents, the strangely named Café Roma, play in the Plymouth and West Devon Combination League 2nd Division and sat in 7th place (out of 12) going into this game. I couldn’t find much else about their origins, so I presume they represent (somehow) the Café Roma in Plymouth which can be seen through Google Street View. They beat Tedburn St Mary (of the Devon & Exeter League) to get through to this game at the Pavilion Playing Field. 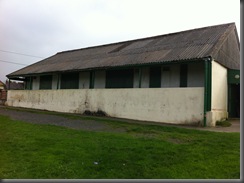 Considering this is Level 13, I wasn’t expecting the San Siro, however, this is a decent little pitch with some cover (in the picture above) although, that is set a fair distance away from the pitch. The pitch wasn’t roped off and most of the spectators chose to sit on the dugout block opposite me as neither team were using it for subs. As the game kicked off, I wondered how long Hartland could hold out for against Roma and the answer was only 1 minute, when Roma’s first foray forward saw Danny Norman shrug his defender off the ball and slotted past the Hartland goalie to gave the away team the perfect start. That was the cue for this game to be a roasting for Hartland, yet on 12 minutes, they should have equalized when a hesitation in the Roma defence allowed a Hartland forward to nip in, but he put his shot just wide. That miss was costly. On 16 minutes a long ball forward to the Hartland back line out again and Neil Haddock raced through. His first shot came back off the post, but luckily for him, the Hartland goalie couldn’t collect the ball in time and Haddock cracked home the rebound for 2. Four minutes later it was #3 as Rob Heard put Wayne Riley through on the right and he skipped past 3 or 4 woeful tackles and rounded the keeper before slotting home. Easy. Roma finished the scoring in the 1st half on 34 minutes when a ball was crossed into the box and Riley (despite being behind his defender) managed to get in front and volley home. The situation could have been made even worse for Hartland just before half-time when their captain brought down Riley in the penalty area, however Riley got up and curled his shot just wide before saying that was the advantage played and there should be no further action. 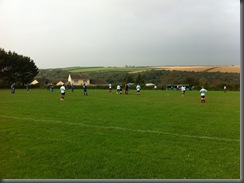 Despite everybody at the pitch wanting Hartland to make a game of it in the 2nd half, that fire was well and truly pissed on just 4 minutes in when Rob Heard put himself through on the right and hammered a brilliant finish into the top left corner which his whole team were amazed at. Even though they were getting hammered and the majority of the team looked fairly young, Hartland to their credit were still trying and played most of their football on the deck which was great to see. Their main achilles heel though is their defence and when Roma attacked, more often than not, they scored. #6 came on 59 minutes when more good play down the right hand side allowed the ball to be cut back to Riley for his hat-trick. Danny Norman got #7 when another long ball over the top caught the slow back 4 out and he ran through to put the ball under the goalie. My record goals in a game had been Lancaster City 3-5 Salford two seasons ago and that record was equalled when from a corner, the Hartland goalie’s punch was quite dreadful and big defender James Gould volleyed home via a defender’s head on the line. My record was beaten on 81 minutes with the final goal of the game as lanky defender Marc Norman found himself up front on his own when a long ball pieced Hartland again, yet Norman thought he was Cantona as he brilliantly lobbed the goal from the edge of the area to round the scoring at 9. It could have easily of been double figures yet for wasteful finishing and the occasional save made by the Hartland goalie. Hartland didn’t let their heads drop though and could have pulled one back late on but the Roma goalie made a great save at his near post. 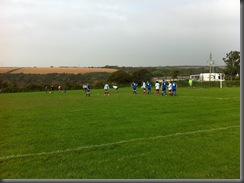 Good (and very cheap!) day out in Devon then for this game as it beat my previous record of goals in a game and boosted my goals seen average for this season quite well too. Café Roma go marching on to the Senior Cup 3rd Round where they drew Witheridge Reserves in a home tie to be played on November 6th. Looks quite an interesting tie that one. As for Hartland, their relegation battle goes on as they’ll look to continue their recent good form in the league to pull away from the job. A decent ground and game in North Devon and probably my first of many village games.