The 11th December for me is an extremely personal day but this is not the outlet to discuss why. That being said, I really wanted out the house for a day out and with the weather in Devon being a recent 7 degrees (tropical!) it was easy to get a game in after the recent struggles. As I was being called into London during the week, it would have to be a cheap game and as I wasn’t fussed about programmes, the rearranged Devon Premier Cup tie at Barnstaple for BOCA Seniors looked the most appealing. 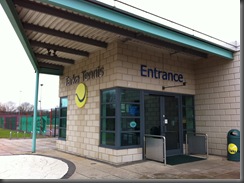 BOCA Seniors are the “top dogs” in the North Devon League. Based in Barnstaple they have had their main success more recently since changing their name in homage to the major footballing side in Argentina. Established in 1987 as The Wrey Arms FC (named after a local Barnstaple pub) and then the Golden Lion Tap in 1993, they became BOCA in 1997 and quickly began shooting up the North Devon Leagues. Winning the Senior League in both 1999 and 2003, their North Devon dominance began in the 2005/06 where they won the Premier Division and then won it another 3 seasons in a row. Last season (09/10) it slipped from their grasp and went to Shamwickshire Rovers for their first title since 2003. BOCA have also won several local cup competitions recently such as the Westward Ho! Cup, Torridge Cup and Brayford Cup all within the last 5 years. Their finest hour though was in April 2009 when they defeated Bovey Tracey 1-0 at Tiverton to win the Devon Premier Cup. With such good recent pedigree in the competition, they were keen to win it again getting to this 3rd Round stage. 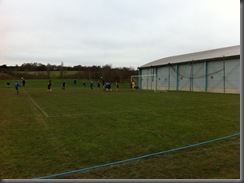 I was pleasantly surprised by the venue as most (bar Torrington) clubs in the North Devon League have a really basic set-up. This is a basic set-up but you do feel like you are at a proper ground (and not just a field). Arriving at the Tarka Tennis Centre, you walk through where you can buy food and drinks and walk through the centre to find the two football pitches at the back. BOCA’s main pitch on the right was roped off down one side, steep grass banking down the other where you could get a very good view. There were also dugouts available on this side, but only the Exmouth Town management seemed to use them. The Southwest Peninsula League side really didn’t look up for this and were quite appalled when a dog had a turd on the pitch (which was picked up!). They had dispatched of Dolton (6-1) and Appledore (2-2, and won on penalties) to get to the 3rd Round and were in 9th (out of 16) in the Southwest Peninsula League Division 1 East. This looked to be a tight game. 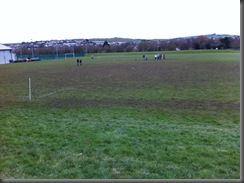 As for the game, this was a shambles. As you can see from the picture above the pitch was an absolute state and possibly should have never of taken place. In fact this was the pitch at HT – it got so much worse later on! Exmouth Town had also been hit by several withdrawals and so kicked off with only 10 men. BOCA had 11 and the full 5 subs. Therefore it looked to be a question of could Exmouth hold out till their 11th man got there and/or the pitch became even more unplayable. BOCA knew this and battered Exmouth early on with a shot cleared off the line and a one on one chance saved as the visitors tried to hold on. On 16 minutes though that holdout ended and then Exmouth promptly collapsed in spectacular fashion. Matt Deakin got the 1st goal as he met a free kick at the back post and his header went over the goalie and gave BOCA the lead. This was doubled instantly as a through ball took out the Exmouth back line and Scott Sharp was on hand to clip the ball past the onrushing Exmouth goalie for 2-0. While most teams would have just collapsed there and then (although they did later) Exmouth actually came back into the game and began to work some passing moves together when one of their strikers were brought down in the area by kicking the BOCA’s player foot. The ref must have felt sorry for them and gave the penalty which Ben Shephard dispatched with ease. BOCA then went and made it 3-1 on 36 minutes with one of the many farcical decisions of the day. While Deakin’s goal was first given for offside, after the referee had a word with the lino (who was an Exmouth coach) he then gave the goal. Hmm. Add to this, the absolute torrent of abuse the three Exmouth Town officials received from BOCA players was just a disgrace and un-needed. BOCA made it 4-1 five minutes later following a goalmouth scramble from a cross whipped in from the left. The last piece of action of the half was Exmouth’s 11th player finally turned up on 43 minutes, and slotted straight into defence! 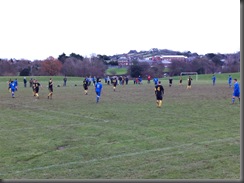 The 2nd half was less action packed. Mainly because both sets of players were trying to kick the shit out of each other as tempers flared and it just got nasty. Exmouth were arguably lucky to survive conceding another as a cross seemed to be diverted over the line as the Exmouth goal plucked the ball out of the air, however the referee didn’t see it. That redemption didn’t last long though as on 64 minutes it was 5-1 as James Davey broke away again down the right and lofted the ball over the Adrian Pullin in the Exmouth goal. Five minutes later came #6 as the Exmouth defence went missing at a BOCA free kick and Sharp got ahead of Pullin to head over the stranded keeper. The scoring ended on 76 minutes when a BOCA run was crudely ended in the box and Richard Shannon fired the penalty home. BOCA gave Exmouth a raping and were through to meet Budleigh Salterton in the Quarter-Finals. 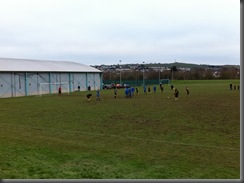 Both sides were really quite awful in their off the ball activities for this game which was a shame as both sides actually played good stuff at times. I saw kicks, neck grabs and punches thrown as the game boiled over and the referee was oblivious to it all, or he couldn’t be bothered doing anything about it. Special mention to BOCA’s Richie Joslin who was an absolute nobhead in this game. Defending himself with “its how I play mate.” Playing like a cunt is no excuse. I will hopefully see BOCA’s QF at Budleigh in late January which will probably be a fairer indication of how good they actually are. Another question does remain, just how bad are Exmouth Town?

- Referee: Nigel Cockwill – 4/10 (either was blind or couldn’t be bothered to act on the violence around him)