Sometimes when you’re in an area you normally wouldn’t be, as a football connoisseur (nerd), you do always look out for potential fixtures where you can visit a ground that wouldn’t normally be on your radar. As my girlfriend was coming down to visit for summer and arriving at Bristol Airport, I had a cheeky look around for any nearby games (she loves me) and found Portishead Town were hosting unbeaten Hengrove Athletic and with their Bristol Road ground easily within reach of the airport and M4 – it was a midweek Western League game for us! 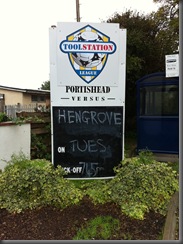 Portishead is a coastal town in Northern Somerset which is extremely close to Bristol and has its history in being a fishing port. Today the dock and fishing services has declined but this has seen Portishead’s quayside turn into a trendy marina and residential place for those trendy Bristol commuters. Portishead was also the home to the BT telephone centre used for non-direct calls to maritime vessels which became known as “Portishead Radio”. The ‘trip-hop’ group Portishead also take their name from the place – describing it as their “dreary home-town”. And it was when we arrived – absolutely pissing down! 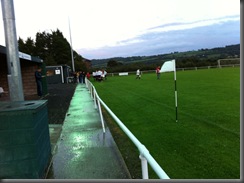 Sadly the journey there wasn’t all that smooth as EasyJet decided to delay her flight for an hour and so we just made it to their Bristol Road ground at 7:22 with a 7:30 kick off. The home side had made an average start to their Division 1 campaign, trying to improve on 12th place last season. They went into this game in 11th position (out of 19) with only 2 wins from their first 7 games and an early FA Cup exit to Sherborne Town – who are now ironically ‘my team’ in the cup for my Road to Wembley. Hengrove on the other hand were having a great early season and went into this game in 3rd place and unbeaten with 5 wins from 6. Merthyr Town were the unsurprising pace setters with many Southern League players on their books, but Hengrove and surprisingly Oldland Abbotonians were also keeping up with them for now. Bristol Road is a basic ground but does what it needs to do for Portishead and is in the middle of a few pitches on a sporting complex. It also has a massive carpark which is just as well as the massive attendance of 40 people may have meant that the carpark was full! The ground is railed off around most of the pitch and has a portakabin type building for the tea hut and changing rooms. A large covered standing block is there as soon as you get in and Portishead have now added a covered stand on the far side – although nobody sat in it even though one official was trying his best to get people in there! Quite a tidy ground and maybe with the new stand, one ready for Level 9? (Western Premier) 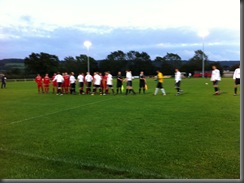 I had only ever seen one Western League Division 1 game previously and that was at Minehead last year, which was an awful awful game. Therefore I wasn’t expecting much and was just happy I could chat to my girlfriend at the game in case it was another dour-fest. Those fears lasted all of a minute as with Hengrove’s first attack they won a free kick outside of the area and James Dunn stepped up and curled it straight around the wall and past Seb Gribble in the Portishead net. Excellent start! Both sides had a couple of half chances as the play swung from back to forth but the homesters had an equalizer on 9 minutes when a great ball was floated in and Danny Benn looped a header over the Hengrove goalie and it was 1-1. The game then did quiet down slightly although 10 minutes after Portishead’s equalizer, Hengrove should have retook the lead when a breakthrough was missed by the linesman for being slightly offside but Gribble saved well. The final piece of action in the 1st half was a piece of superb ‘master of disaster’ defending. You might remember Nigel de Jong’s “tackle” in the World Cup final? Well imagine that, but the Hengrove defender jumped and caught the Portishead player in the neck! It was also the first time ever I have seen where nobody argued that it wasn’t a penalty. Mark Mapstone dispatched the penalty and Portishead were 2-1 up at half-time. 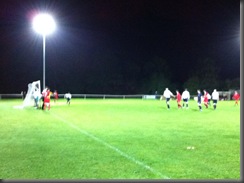 The second half was a great 45 minutes of attacking football as no team could defend so attack attack attack is all they had. The midfields were also getting bypassed far too easily which was best summed up by Portishead’s 3rd goal of the night. From a Hengrove corner (picture above, albeit slightly blurry), Portishead countered and Keiran Marsden found himself all alone to take the ball and finish well under the goalie. Hengrove were not going to let their unbeaten record disappear easily however though and were only 1 goal behind on 64 minutes when a ball in from the left was not cleared properly and found Bradley Heynes about 3 yards out who made it 3-2. The game was wrapped up though by Portishead on 70 minutes when they by-passed the Hengrove midfield with easy again and a ball from the right hand side went straight through the box and found Keiran Marsden again all alone who dispatched the ball with ease. Where was the marking? Towards the end, the game did get a little niggly with a few late challenges but the home side ran out 4-2 winners. 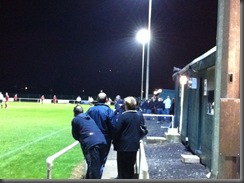 A good, unexpected ‘tick’ then in North Somerset as I (although I don’t know about her) fully enjoyed this game and was well worth the £4 entry fee to see. A nice little ground, although probably one not to visit on winter nights given its close proximity to the Bristol Channel! The Western League is probably my favourite one and its good to be seeing more grounds in it that are well out of range normally. Ironically, these two sides met the following Saturday (18th) in the FA Vase where Hengrove won 2-0 at home to gain a little bit of revenge.

Photos from Portishead vs Hengrove Athletic 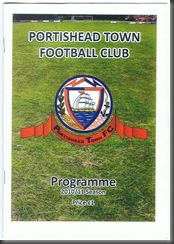