It’s my annual “where are they now?!” fest with a look at all 66 different teams I witnessed playing this fine season. Some had crackers, some had stinkers. Here’s a look:

Accrington Stanley (League 2 – 5th) –> Produced some stunning end of season form to finish in a play-off place before that dream was extinguished by Stevenage in the semi-finals with a 3-0 agg win. 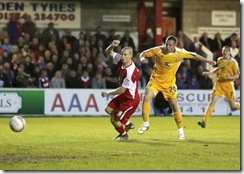 Alphington (SWPL Div 1 East – 7th) –> Technically were the 2nd best team in Exeter this season with a seventh place finish. Decent too for a team with small crowds.

Appledore (SWPL Div 1 East – 6th) –> Would have wanted to do so much better. Not even a sniff of a title challenge and an early exit from the Devon Premier Cup they won last season. Must do better for 2011/12.

Axminster Town (SWPL Div 1 East – 16th) –> Finished bottom and 6 points away from 15th place Crediton. Will need to get better and rapidly so otherwise their new ground will be hosting Devon & Exeter League football instead.

Berwick Rangers (Scottish Div 3 – 6th) –> Same finish as 2009/10 so plodding along nicely. Got to Scottish Cup 4th Round and gave Celtic a good game before going down 2-0. Bickleigh (SWPL Div 1 East – 10th) –> Yet another improving season for the village side. Reached the semis of the Devon Premier Cup and rose again in the league. Can they keep this up?

Bishop Sutton (Western Premier – 5th) –> By finishing 16 pts behind Champs Larkhall Athletic, it shows there is much work to do, despite a good fifth place finish.

Blackpool (Premier League – 19th) –> So close and yet so far for Ian Holloway’s side. Still with a chance of survival on the final day, their 4-2 defeat to Man Utd saw them relegated back to the Championship. Still, they made a lot of friends with their gun ho type football and did the double over History FC, so that alone gets a massive thumbs up.

Blyth Spartans (Blue Square North – 9th) –> Normally a team tipped for a struggle, a great ninth place finish and a quarter-final appearance in the FA Trophy too. (Where they lost out to Gateshead). With new boss Steve Cuggy now in, a “revolution” is on for next season.

BOCA Seniors (North Devon Premier – 1st) –> Another successful season for the BOCA boys. Won the league with a 23 point margain to 2nd place Braunton and won the Brayford Cup with a 2-1 win over Bradworthy. 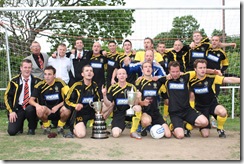 Bodmin Town (SWPL Premier – 2nd) –> Finished 8 points behind Champs Buckland but too many draws cost them as well as lack of goals. Bodmin were the only side in the Top 5 to score less than 100 (“only” managed 98 goals). Did win the Cornwall Senior Cup again though.

Bovey Tracey (SWPL Premier – 17th) –> A club on the up? They will still have SWPL Premier football at Mill Marsh Park next season and with floodlights being put in as I type this, FA national competitions will not be far away either.

Buckland Athletic (SWPL Premier – 1st) –> Almost like Bideford’s season in 2009/10 with a league win and a fantastic achievement by winning the Devon FA St Luke’s Bowl with a victory on penalties over Tiverton Town. Unlike Bideford last season though, the Bucks haven’t taken the step up. Lack of ambition? 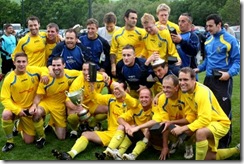 Budleigh Salterton (SWPL Div 1 East – 2nd) –> Everyone’s least favourite club missed out on trophies twice by losing the league and Devon Premier Cup final to Liverton United both times. At least they have the chance of playing in a higher division next season, oh wait.

Bury (League 2 – 2nd) –> Managed to overcome the defection of Alan Knill to Scunthorpe midseason to secure promotion to League 1. Where they will play Alan Knill’s Scunthorpe.

Café Roma (Plymouth & West Devon Combination Div 2 – 7th) –> Mid-table in league and went out of the Devon Senior Cup in the 4th Round with an 8-3 defeat to Hookhills Utd.

Callington Town (SWPL Div 1 West – 3rd) –> Would have secured 2nd place in the league but lost two goals in injury time in their last game to lose that place to Godolphin Atlantic. They did win the Cornwall Charity Cup to still make it a decent season.

Camelford (SWPL Div 1 West – 1st) –> Ignoring the controversy about THAT abandoned game, they played great football over the course of the season and had the balls to step up to the SWPL Premier. Good luck to them. 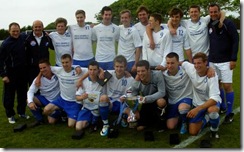 Cullompton Rangers (SWPL Premier – 16th) –> I’m amazed they actually came where they did as they were one of the worst teams I saw this season. Surely will drop next season?

Dawlish Town (Western Premier – 6th) –> Decent final position for Dawlish capping off a good season. Strange that rumours have been coming out about them dropping back to SWPL though?

Dorchester Town (Blue Square South – 17th) –> Disappointing for the Dorset club as they were troubled by relegation all season. They crashed out in the FA Trophy 2nd Round to Eastbourne Borough after a replay.

Edinburgh City (East of Scotland Premier – 6th) –> 13 draws cost them a shot much higher in the league. With only 3 defeats all season, City have missed out on a much better finish here.

Exeter City (League 1 – 8th) –> An excellent season for the Devon club. Finished only 1 point off the play-offs and reached the JPT Southern Final before a defeat to Brentford stopped their trip to Wembley. 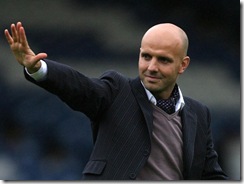 Exeter Civil Service (SWPL Div 1 East – 12th) –> Considering they won this division a couple of seasons ago, 12th place is extremely disappointing for a club seemingly stuck in this league.

Exeter University (SWPL Div 1 East – 8th) –> Bang in midtable shows that the uni side are getting to grips now with Saturday football. Their BUCS team came 3rd in Men’s 1A League.

Exmouth Town (SWPL Div 1 East – 11th) –> Will definitely need to improve next season. Especially as they are starting to live in the shadows of near neighbours Budleigh Salterton.

Falmouth Town (SWPL Premier – 5th) –> Just pipped by Torpoint for a Top 4 place but still a decent season for the Cornish side.

Hamworthy United (Wessex Premier – 9th) –> Reasonable enough from the Hammers. With Poole now leaving this league, 2011/12 Wessex Premier should be an open one.

Hartland (North Devon Senior – 16th) –> Relegated again as Hartland rocket down the leagues. Only a –131 goal difference this time out and will probably be at the wrong end of Intermediate 1 next season.

Heriot-Watt University (East of Scotland Premier – 12th) –> Relegated down to EOS Division 1 on the final day of the season where they will now face some footballing giants such as Peebles and Coldstream.

Liverton United (SWPL Div 1 East – 1st) –> A league and cup double. Can they repeat it next season? And, will they go for promotion if they do?

Macclesfield Town (League 2 – 15th) –> Got over the tragic death of Richard Butcher to finish in a decent position.

Morecambe (League 2 – 20th) –> The promotion hopefuls never got going at all and only finished 4 points clear from drop. Sammy Mac was rightfully sacked and new rookie boss Jim Bentley comes in for 2011/12 with the task of keeping them up. 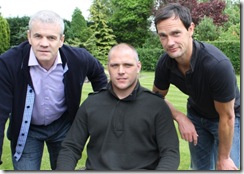 Mousehole (SWPL Div 1 West – 14th) –> The tiny club from deep Cornwall are amongst the strugglers again. Can they improve?

Notts County (League 1 – 19th) –> Paul Ince couldn’t halt the slide and so was sacked with Martin Allen just saving the club from the drop on the final day. Finished just 3 points clear in the end.

Okehampton Argyle (SWPL Div 1 West – 15th) –> Poor season finishing 2nd bottom and two points off bottom club Hayle. Have been granted their wish though and will move sideways to start 2011/12 in Division 1 East.

Ottery St Mary (SWPL Div 1 East – 13th) –> Western League days look eternities ago as the Otters are really struggling currently. Hopefully will bounce back for their Centenary year this season.

Radcliffe Borough (Evo-Stik Div 1 North – 18th) –> Finished a comfortable 22 points off relegation and the financial fears they had seemed to have vanished for now.

Sherborne Town (Western Premier – 14th) –> Ok season for a team in transition and reached broke new ground in the FA Cup by reaching the 2nd Qualifying Round. 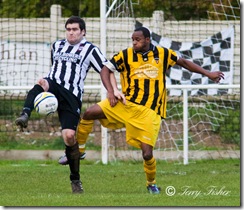 St Blazey (SWPL Premier – 8th) –> A troublesome season finished off with a disappointing defeat in a classic cup final. They went down 6-4 A.E.T to Plymouth Parkway in the Throgmorton Cup final that would have saved their season.

Sunderland (Premier League – 10th) –> Flirted with relegation after poor 2011 form but managed to pull clear in the end and even finish above hated rivals Newcastle.

Taunton Town (Southern League Div 1 S&W – 9th) –> 9 points off play-off, although they did finish above the rest of their SW rivals. Will relish playing Tiverton Town next season.

Teignmouth AFC (SWPL Div 1 East – 4th) –> Could have finished in the top 2 but completely lost form towards the end of the season and just hung on to their top 4 place.

Tiverton Town (Southern Premier – 20th) –> Last season’s reprieve only delayed the inevitable. 5 points off safety and they never looked like finishing clear of the drop. At least will have some more derbies next season with Taunton, Bideford and Bridgwater.

Torpoint Athletic (SWPL Premier – 4th) –> A fantastic season for the Point. Top 4 in the league and reached the FA Vase QF when they went down to a 2-1 defeat at Poole Town.

Torquay United (League 2 – 7th) –> Lost in the play-off final to Stevenage as the Gulls failed to turn up for a big game again. Then boss Paul Buckle joins newly relegated Bristol Rovers and takes goalie Scott Bevan with him. Torquay may well be fighting a different battle under Martin Ling next season… 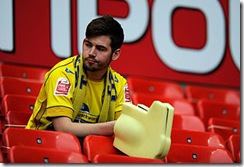 Vospers Oak Villa (SWPL Div 1 West – 4th) –> Decent enough from the Plymouth based side and even picked up a small bit of prize money too.

Wadebridge Town (SWPL Premier – 20th) –> Woefully bad as they picked up only 19 points all season and were promptly relegated.

Wellington AFC (Western Premier – 18th) –> Went into the final game of the season with a winner takes all match against Longwell Green Sports where the winner would stay up. They lost. And will be playing Western League Division 1 football next season.

Weston-Super-Mare (Blue Square South – 12th) –> Excellent season for a team that normally finishes in the relegation places only to survive due to another club’s financial meltdown. Needed none of that this time out.

Witheridge AFC (SWPL Premier – 14th) –> Well away from anywhere. Made their FA Vase debut with a 1-0 defeat to Western League side Brislington.

Yeovil Town (League 1 – 14th) –> Relegation favourites managed to stay up again due to some excellent loan signings and a top end of season run.

And that is it! The end of 2010/11, especially with next season’s top league fixtures being released today, I can now start to make plans for 2011/12 and a season really into the unknown. Photos below are some snapshots from professionals of games I was at this season. 2011/12 preview up soon! 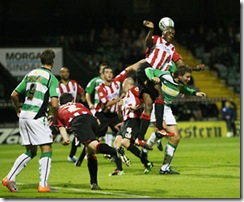 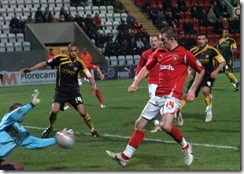 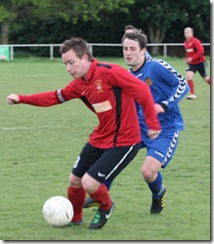 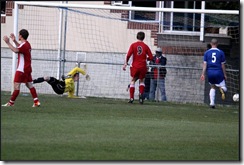