It was County Cup day in Devon where various clubs right down to the bottom end of the pyramid have a crack at some decent silverware for their clubs. I decided to take in the highest Cup competition being played today and finally get to one of the closest grounds I am still yet to visit. It was off to the intriguing SWP Division 1 East vs Division 1 West tie of Exeter Civil Service vs Vospers Oak Villa. 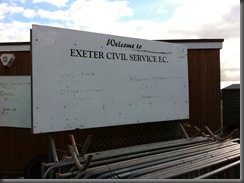 This is my first blog report to come from the City of Exeter so… Exeter is the County Town of Devon and is a majorly historical City as it was founded in the early 12th century by the Romans. Its Cathedral right in the centre of the city dominates the local landscape as you can see its roof-tops for miles. It was also confirmed that Exeter is one of the Top 10 places in Britain for a business to be profitable with two large stations (St Davids and Central), an International Airport and the ending of the M5 nearby too. A large and successful University, bags of historical landmarks and monuments and the River Exe running through the city makes Exeter one of the most attractive and underrated places in the UK. 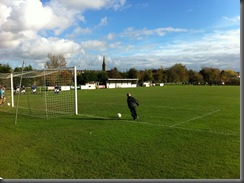 Exeter Civil Service is part of the national CSSC (Civil Service Sports Council) where employees of the Civil Service can keep fit by taking part in a variety of sports and leisure activities. As part of the Exeter Area Association, ECS have a number of teams who play in the regional areas of the football pyramid. ECS’s 1st team plays at Level 11 in the Southwest Peninsula League Division 1 East where they have been reasonably successful as they won this Division in 2008/09 but did not take promotion. (Presumably because they do not have floodlights) This season had been more of a mixed bag for ECS as in the league they sat in 7th (out of 16) in Div 1 East, yet they have played 12 games – the most in the league. Their ground Foxhayes is situated towards the rear of the Exeter CSSC complex and is a fairly basic ground, yet still feels quite enclosed due to the pitch being railed off all the way round. They also share with the cricket club so part of the ground has mesh fencing to protect the wickets. 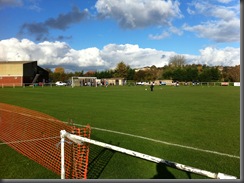 To get to the 2nd Round, ECS had dispatched of Devon and Exeter League side Heavitree United 3-0 to get here. Their opponents from SWP Division 1 West had not even had to play a game to get into the 2nd Round as Bideford Reserves had to pull out in R1 as they could not raise a side. I am hopefully seeing Vospers play at their home ground at the end of the month as part of a “Plymouth Double” so I’ll detail more then about them, yet they went into this game in 4th (out of 16) place in Div 1 West, only 6 points behind leaders Newquay. This game looked to be a real tight one to call. 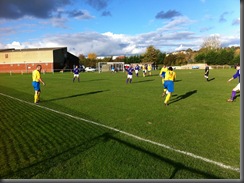 Just before kick-off, I met Phil Hiscox, the legend who runs the SWP League who was also taking in this game and he stated that he had not seen a 0-0 so far this season. Slightly concerned I would break his record after seeing a bore draw last weekend in Edinburgh, I was delighted to see Vospers take the lead on 4 minutes with the first real chance of the game. A burst forward from James Hoblin took him to the edge of the area and his low drive just crept past Nick Coles in the Civil net. A nice early goal to break my duck! Although Coles really should have saved it, but he is a tad short for a goalie. It was nearly 0-2 a few minutes later when Civil didn’t deal with a cross and it was nearly bundled but Coles made a great save with his legs. These missed chances cost Vospers dear though on 19 minutes when they gave a free kick away just outside the area. It was curled in and David Wilkes had a free header which was saved by Andy Barnes, but Wilkes smashed home the rebound to grab an equalizer. The game towards the end of the 1st half was very entertaining as both sides really went for it, but Vospers did create the better chances overall. 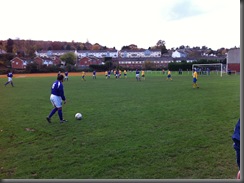 For the 2nd half, I moved around to the other side of the ground where the only covered area was and saw the game take a turn for the angry side as some rash tackles began to fly in as the referee let them get away with it and that in turn made the tackles worse. Vospers were the main culprits of this as the match began to turn away from them so their new tactic was to kick the shit out of the home side. One of their players mid-way through the half was lucky to still be on the pitch after a terrible tackle but only got a yellow. Civil were racking up the possession and began to create the chances too as I saw miss of the season from Harry Taylor. After some excellent work from James Humpherys down the left, his low cross found Taylor at the back post with an empty net, and he shot wide. He made up for that on 84 minutes when I had already had prepared myself for Extra-time. A great through-ball put him on goal to the right hand side and his low shot went off the other post and in to send the home side into raptures. The drama wasn’t over yet however as right on the last minute, a Vospers player went over in the box and it looked for all the World to be a penalty, except to the referee and Civil escaped with a 2-1 win. 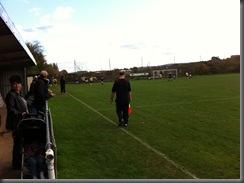 A very good game between two hard working sides yet it was Civil Service who went through to the 3rd Round (last 16) of the competition where they face fellow SWP Div 1 East side Liverton United at their Halford Ground. I may also be seeing Vospers in a couple of weeks time in a Plymouth double, but Torquay Utd’s FA Cup home draw may just change my mind! Good luck to Civil Service in Round 3, a cracking day out.

- Referee: Nicholas Chapman – 5/10 (let the game boil over around him) 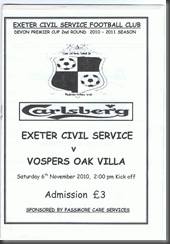