Thanks to a job interview, I had an expenses paid weekend in Edinburgh (well the train journey) and despite wanting to go watch Hearts’ game away at Rangers the fact I would be putting myself next week through not 1, but 2 Hearts games, it meant my wallet had the final say and I had to stay local in Edinburgh if I wanted to see a game. I had a massive list of East of Scotland games that were on in and around Edinburgh, however I had been prewarned that bad weather was expected on the Saturday and low and behold when I woke up that morning it was raining. As my 78 year old Gran doesn’t have a computer nevermind broadband, I had to dash off to an internet cafe on South Bridge and use the Non-League Matters forum and the East of Scotland FA website to see where I would dash off to that afternoon. In the end, Spartans said their game should go ahead and I made the short journey over to the Granton area of Edinburgh, via Haymarket Station to pick up an AMT Banana Milkshake. (A taste orgasm) 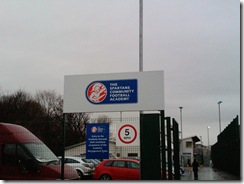 Spartans play in the Granton area of Edinburgh in the North-West of the city, and too near Leith for my liking. Normally on my blog reports I’ll describe the town/city that the club I’m visiting play in, however if you’ve never heard of Edinburgh, firstly are you stupid!? Secondly, visit, visit now. Its the greatest city in the World and I could write for so long about why its so great, but that’s for another blog (which isn’t mine) After arriving at the Ainslie Park complex at around 1:10, I had a quick gander around the leisure centre and the astroturf pitch next door to Spartans main pitch where their youth team and junior team played their games. First sight of Ainslie Park is that its very shiny and new which is no bad feature, as there is room for expansion if Spartans ever do make it to the SFL. The guy on the gate must also get a special mention as he went to charge me £6 for entry and programme, until I asked if there was student concession available (I know thats cheeky) and then he just charged me £3 for both. With the words “dinae tell anyone else aye?” and a wink as I walked in. Legend. There is only one seated stand at Ainslie Park which runs down one side of the pitch where the rest of the ground is uncovered grass standing with it railed off the whole way round. The clubhouse is also excellent where the 1st floor holds some signed shirts of games played at Ainslie Park (check the extra photos) and a great choice of food as I had tomato soup with a roll, scotch pie and 2 cans of Irn Bru, all for £3 (!?) as I watched Chelsea’s 1st half of their FA Cup game against Preston while waiting for kick-off. 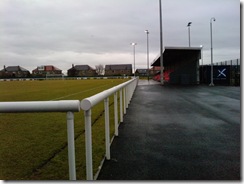 The Spartans were founded in 1951 by ex-players of Edinburgh University (who also have a team in the East of Scotland Prem) and their original idea was to have a team of graduates play for them, but players from other places also now make up part of the squad. They are one of the most successful East of Scotland teams and won the Premier Division title last season and went into this game top of the league with a 1 point and 2 game advantage of their opponents Lothian Thistle. They moved from their old ground at City Park, which I walked past to get to the Ainslie Park complex, a classic old ‘ground’ of sloping grass hills and no facilities at all. Great in the rain. Spartans have plans to eventually become an SFL side and applied in 2008 when Gretna imploded, but surprisingly lost out to fellow East of Scotland side Annan Athletic who have done a fine job in their 1st year and a half in Division 3. The visitors to this game were 2nd place Lothian Thistle who themselves were having a fine season after finishing 3rd last season, they were looking for a title challenge as they came from their Saughton Enclosure to Ainslie Park for this game and the programme notes mentioned the goalscoring feats of Wayne McIntosh who was already on 17 for the season. 1st vs 2nd, a big game ahead. 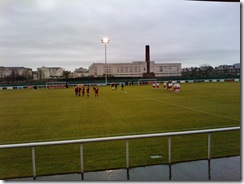 Before kick-off there was a 1 minute applause for ‘Wheelie Jim’, a Spartans official who sadly passed away just before Christmas. The applause was impeccable and the game kicked off with Spartans going for it early on and forcing a couple of early corners which Thistle keeper Kevin Swain looked quite dodgy on as Lothian struggled early on to cope with the Spartans pressure. Then on 7 minutes, they went up and took the lead as a through ball found Wayne McIntosh who managed to beat Spartans goalie Chris Flockhart to the ball, skipped past two challenges and placed the ball into the empty net. The 4 Lothian fans went mental in the stand as Lothian took a surprise lead and Spartans needed to get back into the game quickly. They almost were a man down after 13 minutes when Keith McLeod received a late challenge and retaliated by stamping on the Lothian defender. What a stupid thing to do! And as the whole ground expected a red card, the referee only showed McLeod a yellow card as the Lothian team went ballistic at the awful decision. Spartans then went and equalized 2 minutes later when a great diagonal throughball played by Alex King only found a Lothian defender nicknamed “Shaggy”. He completely missed the ball however and that allowed Robbie Manson to skip through and easily stroke the ball past the keeper to make it 1-1. Both sides then began to create chances, but it was Spartans who took the lead on 26 minutes when McLeod finished off a great passing move by smashing the ball past Swain to delight the home support. Lothian Thistle must have wondered how they did not go in level at half-time as first Mark Lothian missed a sitter 3 minutes later and just before half-time a Lothian free-kick caused mayhem in the Spartans box and last ditch blocking allowed Spartans to escape with a 2-1 lead at half-time. 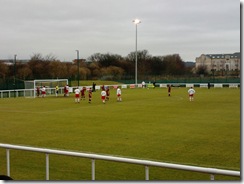 At half-time, tempers flared as I overheard the referee say to the Lothian manager “you dinae tell me wha tae do!”, classic. As I went up and had my 2nd can of Irn Bru (I’m giving it up for Lent, I may as well drink as much as possible!) and a lush Scotch Pie for a brilliant price. I also learnt my lesson, that East of Scotland scorers and times could be awkward to get a hold of so I became an uber nerd for this game and asked for a team sheet, or a picture of one, and ended up getting both sides team sheets with the addresses of the Lothian Thistle players on it. Not sure if I was meant to take it, but an official offered it so who knows! I also had a piece of paper to write the times goals and chances came and went at so I stood out like a sore thumb taking notes of the game! 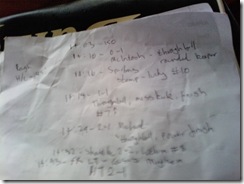 The 2nd half was less intense as both sides decided to save their energies for a late burst in the final stages as I struggled to write any notes for the 2nd half until the 66th minute when Robbie Manson had a chance to add a 2nd when a brilliantly worked move gave him a headed chance that just flashed wide. Spartans then on 75 minutes should have made the game safe when a great Maradona-esque run from Gavin Malin saw him skip past Lothian Thistle player after player only for his one on one shot to be brilliant turned wide by Kevin Swain. Spartans’ corners all game hadn’t been great and it was no surprise when the corner won was wasted. By this time Spartans’ cult player Omar Kader had come on and was playing right wing and got a great cheer of “OMAR! OMAR!” whenever he got near the ball, so I expected big things. Lothian Thistle were creating chances to keep Spartans on their toes, but Omar Kader had two chances late on to wrap up the 3 points. Firstly he ran at the Thistle defence who were clearly worried at his pace and had to bring him down crudely to stop the run, the resulting free kick came to nothing. However, on 89 minutes another through ball found Kader who just had the goalie to beat and his shot flew past Swain……and skied the bar completely. Spartans then hung on during injury time to pick up a big 3 points. 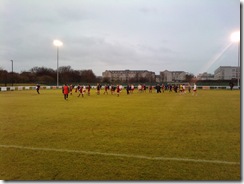 Firstly, The Spartans are easily the friendliest club I’ve had the pleasure of visiting with every member of staff helpful and The Spartans have rocketed up to my "2nd Edinburgh club”, as if I move there after university then Ainslie Park will be getting a lot more visits from me. The ground itself (or the overall complex) is also a great place to be and I hope Spartans can one day gain their dream and become an SFL club as the place is a lot more appealing than many Division 3 clubs are. My next two games are also in Scotland as its a Hearts’ double with the League and League Cup at stake, so expect some angry ranting for my next two visits. As for this game, delighted to get here and an extremely enjoyable game!

Photos from The Spartans vs Lothian Thistle 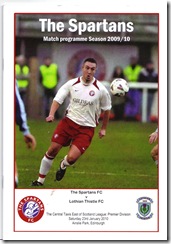