During the Charlton game (remember that?) a work colleague mentioned that he was a Macclesfield Town fan and fancied doing the upcoming away game at AFC Wimbledon. When this was pushed to a cold January midweek fixture due to Macclesfield’s FA Cup run, it was time for a “cold Tuesday evening” in League 2 and seeing what its like to be an away fan at the Wombles. 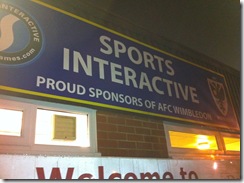 Wimbledon is a district in the south west area of London located south of Wandsworth, and east of Kingston upon Thames. It is home to the Wimbledon Tennis Championships and New Wimbledon Theatre, and contains Wimbledon Common, one of the largest areas of common land in London. The residential area is split into two sections known as the "village" and the "town", with the High Street being part of the original medieval village, and the "town" being part of the modern development since the building of the railway station in 1838. Wimbledon has been inhabited since at least the Iron Age when the hill fort on Wimbledon Common is thought to have been constructed. The village over time developed with a stable rural population coexisting alongside nobility and wealthy merchants from the city. In 1838 the London and South Western Railway (L&SWR) opened a station to the south east of the village at the bottom of Wimbledon hill. The location of the station shifted the focus of the town's subsequent growth away from the original village centre. In the second half of the century, Wimbledon experienced a very rapid expansion of its population. From a small base of just under 2,700 residents recorded in the 1851 census, the population grew by 60 per cent each decade up to 1901 increasing fifteenfold in fifty years. During this, time large numbers of villas and terraced houses were built along the roads from the centre towards neighbouring Putney, Merton Park and Raynes Park. During the 1970s and 1980s Wimbledon town centre struggled to compete commercially with the more developed centres at Kingston and Sutton although Square Enix, Unibet and the NHS all have major HQs here to make Wimbledon a reasonable hub of business. (I know AFC Wimbledon are based in Kingston…) 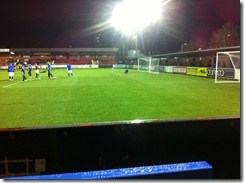 AFC Wimbledon’s history is a controversial subject. Whenever I start in their history, someone will probably moan and say that’s wrong. The story of Wimbledon FC moving to Milton Keynes is one that everyone knows so for ease of writing a paragraph, I’m going to enter from the birth of the “AFC”. The club was founded by supporters of Wimbledon Football Club, led by Kris Stewart, in June 2002. Days earlier, the FA had agreed to allow Wimbledon F.C to relocate 56 miles north to Milton Keynes. The distance involved in this relocation was unprecedented in English football; by moving in such a way, Wimbledon F.C. were cutting all ties with the area of Wimbledon. Starting out in 2002/03 in the Combined Counties League they narrowly missed out on promotion but had an average attendance of over 3,000. More than the new MK Dons. The next few seasons were fantastic for the Dons however as they broke record after record in their relentless promotion quests. The CCL was won in 2004 and then the Isthmian League 1st Division was won in 2005 while they remained unbeaten for 78 league games. While 05/06 saw them fail to gain another promotion, 06/07 was overshadowed by the Jermaine Darlington affair who was ineligible to play and AFC were deducted 3 points in the end. Terry Brown came in as boss and led AFC up to the Conference South for 2008 and then a double promotion as they joined the Blue Square Premier for 2009/10. (As I joined them in Barrow) Last season they completed their exceptional rise back (or joined) to the Football League after beating Luton Town in the play-off final on penalties. 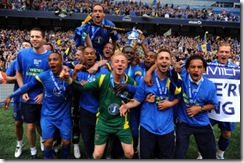 (They are Football League)

This season the Dons had got off to a fantastic start and when they dispatched Morecambe 2-1 at the Globe Arena on 8th Oct, they rode high up in 3rd place. Since then though, they had gone on a winless run in the league of 12 games and slumped down towards the bottom, but a 2-1 win at Port Vale and then a stunning 4-3 win at Gillingham had put them in 15th for this game. With play-offs probably out of the question now (only an almighty run of form now would get them in) closing the season out in mid-table and away from any relegation fears would probably be the target for the Dons. Their ground at Kingsmeadow is essentially a non-league ground but is adequate for League 2 and provides a cosy place to watch football. Macclesfield fans were put into one part of the John Smiths Stand which had a tiny part of cover with a shallow terrace down towards the Kingston Road End. Wimbledon are wanting to move back to Merton and have a 10,000 (?!) capacity ground at some point in the future but that is a long way off. Macclesfield have plodded along nicely in mid-table although their FA Cup form seems to have knocked their league form off as they had lost the last 3 games in the league. As a final point, fair play to the Macc fans as they brought down just over 100 away fans for a cold midweek game, which is about 10x more than I thought there would be. 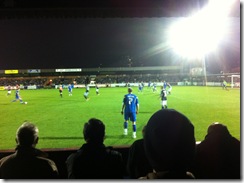 For the first half, they needn’t have bothered. It was one of the worst 45 minutes of football I had seen. After Luke Moore fired over the bar within a minute, it did look like we’d see some excellent attacking football. Instead we saw 45 minutes of hoofball and midfield stalemate as neither side looked like scoring. Jack Midson had a show that was saved by Jose Veiga and Macclesfield’s George Donnelly fired over after a brilliant run but that was really it. Fair play to AFC Wimbledon’s match report for the 1st half which made it sound actually better than it was. The 2nd half was completely different though, as the Macc Attack came out and dominated early on with AFC’s defence and Seb Brown in goal having to be alert for the increasing pressure Macc were putting on. On 58 minutes, the deadlock was broken as the Dons couldn’t clear the ball properly, despite having many attempts to do so, and as Shaun Brisley dinked the ball back into the area, Dwayne Mattis held off his defender and fired past Seb Brown to give the away side the lead. This woke up the home side and they fired a fantastic equaliser 2 minutes later with a goal that was completely out of character with this dire game. Billy Knott (on loan from Sunderland) received the ball on the edge of the area and fired home a superb strike into the top corner which to nobody’s surprise made BBC’s “Goals of the Week” video. After those 2 minutes of excitement, the game rolled back to its former dire self. The Dons gave the ball away at the back a couple of times but the blunt Macc Attack couldn’t capitalise on it as Wimbledon pushed on in the last few minutes to try and grab a win. They did so with just two minutes left as the Macclesfield’s back line were carved open by Midson and Kiernan to put Sammy Moore through who lifted the ball over Jose Veiga and gave The Dons the win. 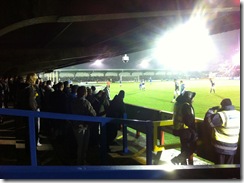 This really was a letdown. Thank god for Phil being here as 90 minutes watching this on my own would not have been that great. Both of these sides should easily have enough to stay up but it speaks volumes of how bad League 2 is this season. Kingsmeadow isn’t a bad ground at all but you can tell AFC Wimbledon would like to move out one day and hand (or sell) this back to Isthmian League side Kingstonian. A strong end to the season for them would be the perfect start for 2012/13 and if they were to get promotion to League 1, then who knows! I learnt a valuable lesson from this game, I couldn’t be a Macclesfield Town season ticket holder.

- Programme: 7/10 (different from other FL progs and good for it) 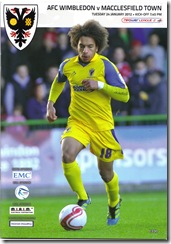 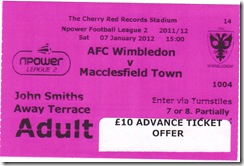