The Western League was easily my favourite football league in this country before I got stuck into the SWPL more and it was sadly overtaken as the majority of WL clubs are situated in and around Bristol which is miles away from me. However, with my current campaign to “clean up” many of the grounds near to me before 2011/12, I was off to Somerset to visit Western League Premier strugglers Wellington and a ground that I had been planning to visit for quite some time. 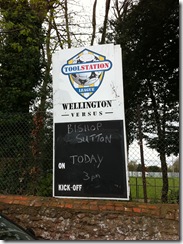 Wellington, in Somerset (not to be confused with the Wellington in Shropshire or New Zealand!) is a small industrial town situated around 7 miles south west of Taunton, near the boarder with Devon. Known as Weolingtun in the Anglo-Saxon period, its name had changed to Walintone by the time of the Domesday Book of 1086. Wellington became a town under a royal charter of 1215 and during the medieval period it grew as a centre for trade on the road from Bristol to Exeter. Major rebuilding took place following a fire in the town in 1731, after which it became a centre for clothmaking. Wellington gave its name to the first Duke of Wellington, Arthur Wellesley, who is commemorated by the nearby Wellington Monument. Local industries, which now include an aerosol factory and bed manufacturers, are celebrated at the Wellington Museum in Fore Street. 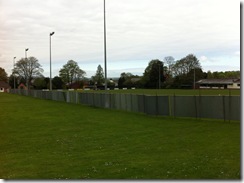 The town’s football team play at the local playing fields in the town on North Street. They share the playing surface with the town’s cricket team who have their pavilion just set off from the football pitch. It is this sharing arrangement which is why Wellington’s North Street ground feels only like half a ground. On one side (where you come in) is a covered standing area that also has a few loose seats that can be sat on. (Obviously, or whatever else you would want to do to/with the seats) The dugouts are also both this side as well as the rear entrance to the small clubhouse. 3 sides of the pitch (not the cricket side) are railed off with hard standing around most of this section. Also, to play at this level, a seated stand is needed within the ground and this is situated randomly behind a goal with a plastic atcost structure that doesn’t really look right. The ground is “enclosed” due to metal shielding panels that run along the cricket side. This also looks out of place and while you have to remember the ground is situated in the town’s playing fields, it’s a shame that it doesn’t feel like a permanent structure or a place Wellington can really call home. One final point on the ground, I was interested to see how cricket was played in the summer here with floodlights et al, but in the programme, the club chairman was asking for volunteers to help take them down after their final home game of the season on Good Friday. Question solved. 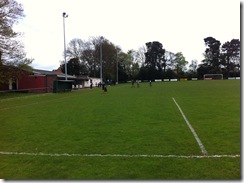 The team itself hadn’t had a particularly good season on the pitch and were right in the shit, in terms of a relegation battle, to avoid the drop down to Western Division 1. After a shocking start where they didn’t pick up their first league win until 23rd October with a 2-1 home win over Corsham Town, they were playing catch up ever since and went into this game in 18th (out of 19) on 17 points, just 2 ahead of bottom club Welton Rovers and 6 behind Longwell Green Sports, but with a game in hand on them. While talking to a club official just before KO, Wellington are in the dark at the moment in terms of relegation from this league. Last season with 20 teams, two (Calne Town and Melksham Town) were the unlucky clubs to drop into Western D1. This season could be different however with only 19 clubs, it may only be one unlucky team to make the drop. Whatever does happen, Wellington would want to finish above Longwell Green Sports, just to make sure the threat of relegation does not haunt them at the end of the season. They welcomed Bishop Sutton for this game who were at the opposite end of the table as they approached this game in 3rd place (although Ilfracombe in 4th had two games in hand on them and only 1 point down). Located near Bristol at the other end of Somerset, BS is a horrifically difficult ground to get to and from via public transport but a few hardy souls (around 10, I noticed) had made the trip from the small village in the Chew Valley. 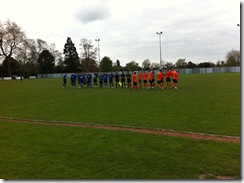 Wellington had played BS only recently and won 2-0 at Lakeview and looked like carrying on their recent good form against BS when they took an early lead. It was only 3 minutes in when Alex Pounde put a delightful through ball to set Craig Herrod on his way and his 20 yard chip sailed over BS goalie Chris Blammon for an exceptional start for the home side and the management team on the bench celebrated that goal like they had just won the World Cup. BS didn’t let that bother them however as they came straight back into the game with the vast amount of territory and possession. BS were also helped by Wellington’s midfield going completely missing at important times so the away side’s first barrier of defence they were coming up against was the actual back line which was putting Welly up against it time and time again. They were however still a small threat on the counter attack, although that ended midway through the half as Wellington’s most dangerous player, Jack Adams made a calf strain worse and was subbed, the 2nd sub Wellington had to make due to an injury already. It was nearly all 3 subs on 41 minutes when a frankly awful challenge on Craig Herrod had the Wellington management off the bench and running towards Craig with a first aid pack. The defender only got a yellow card which was a pathetic decision. I’m not one for wishing players get sent off but the tackle was nearly assault! The match was also now beginning to get spicy not helped by an incompetent referee who was ignoring every call his linesmen made and infuriated everyone at the game. 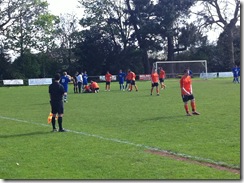 The 2nd half followed much of the same pattern as the 1st half with BS trying hard to get an equalizer that you have to say now their possession deserved. That equalizer did arrive on 61 minutes when a cross from the left found its way to the back post where Liam Farmer was on hand to volley his shot into the ground and bounce away from Ryan Lewis in the Welly net for the equalizer. From then on it was just one end to the other (although not that exciting) as both sides tried to find a winner. It was Bishop Sutton right at the death who had the best chances to take it. Firstly, some last gasp defending in the 6 yard box stopped BS getting a goal bound shot away before in the very very last minute, a free kick from the left again was poorly defended and a BS player somehow contrived to fire over from about 6 yards. 1-1 was the final score. A score that probably doesn’t do either team any good. 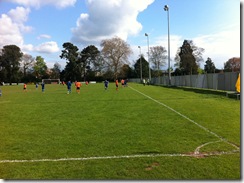 Bar the ground set-up (which is hardly the club’s fault), I enjoyed this day out and even got some excellent weather again for the 2nd half. Every person I spoke with involved with the club was extremely friendly and helpful and I hope they win their battle to stay up in the Western Premier. They are at home to Dawlish Town on Good Friday while other relegation candidates Longwell Green Sports are at home to Bitton. Should results go in favour of Wellington on that day, then a relegation crunch match on 30th April where the winners will stay up. And the loser, erm, might not.

Photos from Wellington vs Bishop Sutton 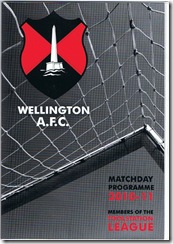