After a mauling in Southampton on Saturday, we headed to Plymouth slightly anxious that we played a team, on paper at least, that were better than the Saints and so another mauling could be on the cards. Yet, as ever with football, hope not expectation kicking in and we looked forward to seeing the first ever meeting between these two clubs. Plymouth is a major city on the South coast of Devon where the rivers Plym and Tamar meet. It is a major port and also home to a large amount of naval forces, which is one of the reasons for its heavy bombing during the Second World War. Today it is the 15th most populated city in the UK and home to the largest naval base in Western Europe, the HMNB Devonport. The city’s major football team, Plymouth Argyle play currently in the Coca-Cola Championship although have slowly edged towards relegation in recent seasons with a 21st place finish last season which could suggest Paul Sturrock is set for another season of struggle. New signings have been made such as Bradley Wright-Phillips and Réda Johnson amongst others which the Argyle fans hoped to see in their only home pre-season game. 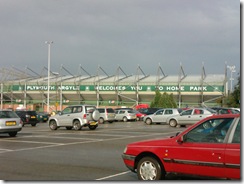 Home Park is a classic ground being made up of 3/4 bowl and the classic Grandstand that has seen improvements made to it in recent times. In 2002, the Devonport, Lyndhurst and Barn Park stands were all improved and made into a bowl much like many of the new grounds today. However the classic element is still there with the Grandstand still standing, although the terracing has had to be removed for being in the Championship and so now, temporary seating has been installed for safety. The Grandstand looks quite similar to Carlisle’s Paddock with different size stands cobbled together, although with Carlisle languishing in League 1 – temp seating isn’t needed there yet. The away fans were sectioned in a corner of the Barn Park Stand and with it being a Wednesday night kick-off, I didn’t expect many Hearts fans to have made the journey, especially after Saturday’s nightmare. We parked up right outside the ground as it has a fairly large car park which is well secured and free which is always a bonus and took a few pics, had a look inside the club shop and then made our way in. 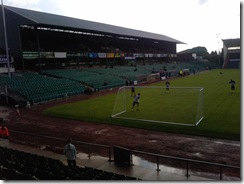 As the game kicked off, it was clear that not many Plymouth fans were out and having all 3 stands open may not have helped them so a lack of atmosphere was present. There was also a small, but hardy bunch of Hearts fans who had made it and were outsinging the Argyle fans quite easily, despite being 400 times more of them. Plymouth made the better start with crosses being whipped in that Hearts struggled to deal with, much like the start of the game at Southampton and Jamie MacDonald needed to be a full stretch to reach a dangerous cross. After a nervy opening 5 minutes, Hearts did start to come back into the game a lot more when the midfield stopped running around like headless chickens and actually got into the game with Michael Stewart quickly closing down attacks. Plymouth still created chances and had their best chance after a succession of corners when Wright-Phillips got an acrobatic volley in which was well saved by Jamie MacDonald. Hearts’ best chance came at the end of the half when we won a free kick on the edge of the area which Larry Kingston lined up for hit…… and flew miles over the bar. The half-time whistle blew at 0-0. 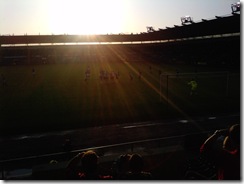 The second half kicked off with the sun still shining and Hearts actually getting right into the game by absorbing everything Plymouth threw at us then hitting them on the break. With a large number of subs being made the play began to get scrappy with both sides now struggling to create any clear cut opportunity with Argyle resorting to taking long shots at Marian Kello which he was dealing with comfortably. Hearts best chance of the match fell to trialist Zezinando who sped away from the Plymouth defence after a great through ball from Jonsson and his shot seemed to go past Romain Larrieu in the Plymouth goal only for David McNamee to get a last ditch block in. Plymouth also made one final chance of note towards the end when Craig Noone got the ball in and Rory Fallon saw his header go over. 0-0 the final score. It wasn’t a defeat! 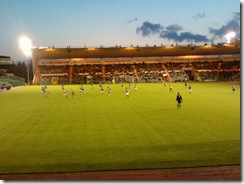 So although Hearts played 180 minutes in England without scoring there is a platform to build on with the improvement in performance at Home Park. Some new players and hopefully a few more arrivals before the opening game to see how we’ll do this season in the SPL. At the end of the game came an added surprise however as while the Hearts players acknowledged the fans this time, manager Csaba Laszlo came over and thanked the 97 Hearts fans who had made the journey and signed autographs and had pictures taken. Below are the pictures of Csaba over by us and the programme he signed for me. Plymouth fans while generally quiet were cheerful and wished us all well for the journey back – good luck to them this season. A return visit to Home Park for a league game is on the cards one day. 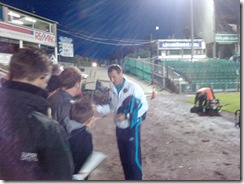 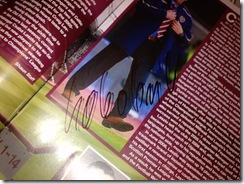 Photos from Plymouth vs Hearts 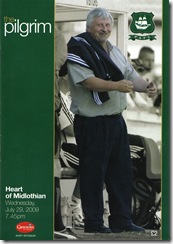