Way back in September, myself and R Dog went along a bog-standard league at Hanwell Town. What then happened was 90 minutes of action packed, proper non-league mentalness as Hanwell came from behind to beat Hertford with a late winner. On the way we both agreed that the reverse game at Hertford should also be a brilliant game and pencilled in the February game there and then. Now the game approached, sadly R Dog’s work was a selfish bitch and made him work the weekend of the gargantuan clash meaning I was going alone – expecting another classic. 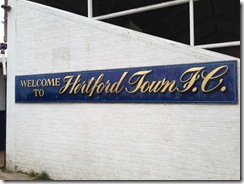 Hertford is the county town of Hertfordshire and is also a civil parish in the East Hertfordshire district of the county. Possibly the first mention of the town is in 673 A.D  when the first synod of a number of the bishops in England was held either in Hertford or at Hartford, Cambridgeshire. In 912 AD, Edward the Elder built two burhs (earthwork fortifications) close by the ford over the River Lea as a defence against Danish incursions. The Normans began work on Hertford Castle, and Hertford Priory was founded by Ralph de Limesi. King Henry II rebuilt the castle in stone, but in 1216, during the First Barons' War, it was besieged and captured after 25 days by Prince Louis of France. The castle was regularly visited by English royalty and in 1358, Queen Isabella, wife of Edward II, died there. The priory was dissolved in 1536 and subsequently demolished and in 1563, the Parliament of England met at the castle because of an outbreak of plague in London. Hertford grew and prospered as a market and county town; communication was improved by the construction of the Lea Navigation Canal in 1767 and the arrival of the railway in 1843. 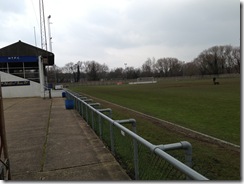 Hertford Rovers were established by a merger of Port Vale Rovers and Hertford United at the start of the twentieth century. The club was renamed Hertford Town in 1904, and absorbed two more clubs - Blue Cross and Horns - in 1908. The new club joined the Eastern Division of the Hertfordshire Senior County League. They also played in the East Herts League, which they won in 1912–13 and 1913–14. In 1920 they joined the Middlesex League, before switching to the Spartan League. When the league was restructured in 1929 they were placed in Division One. In 1938–39 they were Division One runners-up and were promoted to the Premier Division. After World War II they finished bottom of the division in 1946–47, before missing the 1947–48 season as their ground was unavailable. However, they returned to the league in 1948–49, and the following season won the Eastern Division to earn promotion. In 1959 the club transferred to the Delphian League, which they won in their second season and again in their third. In 1962–63 they were leading the league until it was abandoned due to bad weather, but did win the East Anglian Cup by beating Boston United 1–0 in the final. In 1966–67 they won the Herts Senior Cup, whilst a second East Anglian Cup was won in 1969–70. In 1972 the club joined the Eastern Counties League and won the league cup in their first season and finished third in the league. However, at the end of the season the Isthmian League formed a second division, which the club joined. When the league was restructured in 1991 they were placed in Division Three. They were promoted to Division Two after finishing runners-up in 1998–99, but were relegated the following season. Further restructuring saw the club placed in Division One North in 2002, but they finished bottom and were relegated to Division Two. After the division was disbanded in 2006 they joined the Premier Division of the Spartan South Midlands League. Since two Top 4 finishes in their first seasons in the SSML, Hertford have found it more hard going and have been towards the bottom of the league with a 16th (out of 22) place finish last season. 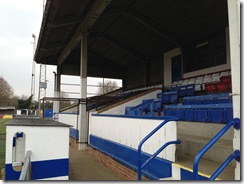 Since that game back in September, Hertford have found it a struggle and were going into this clash down in 20th position. Quite close to the bottom two being only 1 point away from it (although do have 3 games in hand). To try and tide the possible fall into the SSML 1st Division, Hertford had made a large amount of changes to the side as a fair few players who played on that sunny day in September for the Blues had now left the club. In fact only 2 players were playing in both matches. That would have extinguished the possible fiery game that I was expecting as the newbies for Hertford would probably have no idea about the previous meeting between the sides. Hanwell looked good that day and have since risen up the league to 5th, although quite some distance behind leaders Dunstable Town who look good to be playing Isthmian or Southern League football next season. I saw a Hanwell XI taken apart in November by Uxbridge in the Middlesex Senior Cup but losing to a team in a higher league is no disgrace. They have also made additions to the squad including ex Hertford striker Billy Healey who is still the 2nd top goalscorer at the Hertfordshire based side despite leaving for Hanwell in October. One final sad note to report, Travelling Fan favourite Denis Z was no listed in either the programme or in the 14 man squad that Hanwell brought to the game. I can only hope he was ill or unavailable to play for this match and hasn’t left the club. Any information on him would be brilliant. 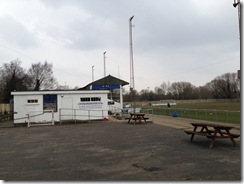 Hertford’s Hertingfordbury Park ground is on the western edge of the town around a 15 minute walk from Hertford East rail station. It had been a long time since I had been to a ground that felt out in the country, but a walk down a narrow country road to the ground comes out next to a field with a fair few horses in it – this ain’t London anymore! The ground for SSML levels is a great one, with a large main stand right in the middle of the touchline and a big covered standing area behind one of the goals called the Stable End. The rest of the ground is uncovered standing, but does have a couple of small terraces on both remaining sides to have a slight elevated view of the game. With a small but cosy clubhouse and an old school toilet block that you basically piss on the floor in and has no running water – this is a ground that is worth the effort to see. One final positive is the view from the far side that looks over to the Hertford Loop Line and surrounding Terrace Wood. 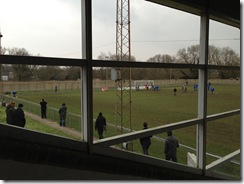 The game started off at a reasonable pace but much like the game in September, there was an early goal for the away team. A nothing cross was poorly headed away by the Hertford defender and arriving with a half volley was X Buckley whose low shot deceived home goalie Dan Lewis and nestled into the bottom corner. Despite this setback Hertford still continued to try and be positive, although it was no surprise they went 0-2 down on 22 minutes. A long throw in was allowed to be controlled by Healey and his hold play allowed X Tararov to run in behind and fire the ball into the roof of the net. It was too easy. Hanwell looked good for the majority of the half but Hertford had a little spell in the game for the last 5 minutes of the half. Firstly Mitchell Palmer forced Charlie Fanner into a save before they fired a free kick over the bar. They did grab a goal however, right on half time as a Danny Charles corner was floated in and while Fanner made a fanny of it, Lewis Donovan tucked home to give the home side some hope for the 2nd half. 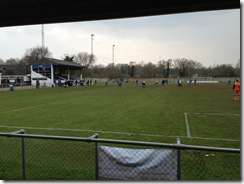 Despite being at fault for their goal, Fanner kept Hanwell’s lead intact right at the start of the half. As the Geordie’s defence went missing (slightly like the bigger team in black and white this season), Tommy Wade found himself all alone in the box with what looked like an easy tap in. However, Fanner brilliantly denied him with a point blank save. It was quite clear that this game was not the fireworks I had hoped for after the September game, but it was a compelling watch as both side’s midfields tried to gain the upper hand. In fact, most of the half was played in the midfield area as both keepers just tried to keep warm with the light snow falling during the game. Towards the end of the match, Hanwell looked the more likely to score as their #9 missed an open goal as his shot rolled onto the post with Lewis beaten and then their #9 missed a one on one chance as they looked to seal the game. Healey was fairly quiet in this match, probably not helped with the “judas, judas” chants from the home fans. On the balance of play, Hanwell just about deserved this and made it an excellent 10 wins in a row. 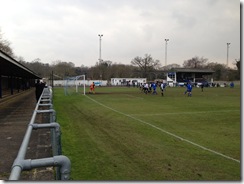 Despite the fact this game was far more subdued than the September clash, it was still a decent watch as some good football was played in tough conditions. Also, the Hertford Town fans were brilliant, especially in the 2nd half as they had chants, harmonicas and even someone with a flute cheering their side on. This game dropped them into the bottom two, with London Tigers winning their 6 pointer at Hatfield Town on the same day. Since then, Hertford lost 0-3 at Aylesbury United and drew 2-2 at home to Stotfold to leave them in 20th, outside the relegation zone on goal difference. Squeaky bum time for them over the coming months. As for Hanwell, they lost 3-2 in the SSML Challenge Trophy 3rd Round to Oxhey Jets before drawing 1-1 away at Haringey Borough to keep up their excellent league run. A pleasurable Saturday afternoon for me, now to find the whereabouts of Denis. 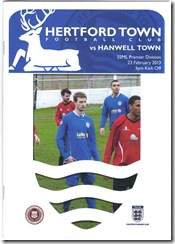