After last week’s shambles on the Isle of Wight and £61 spent to sit in a clubhouse, the FA Vase trail was back on the mainland at Ascot. With this journey being far easier for me (and a fair amount cheaper!) it was a trip across to Berkshire to see if either of the two teams were about to have a mere. (Last horse joke, I promise) 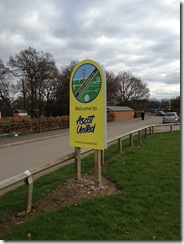 Ascot is a village or small town in the east of Berkshire, about 25 miles west of London. It is most notable as the location of Ascot Racecourse, home of the prestigious Royal Ascot meeting. Ascot was the centre of an important Bronze Age cemetery consisting of a number of Round Barrows. Unfortunately, these have almost all been flattened and built upon. The name Ascot is Saxon and derives from ‘East Cote,’ the Eastern Cottage, probably a reference to being east of the Royal estate at Easthampstead. Some have suggested that it was the original of Sir Thomas Malory’s ‘Astolat’ where, just prior to this period, Sir Lancelot had stayed. During the early 18th century, Queen Anne discovered for herself this open heathland which she thought an ideal place for "horses to gallop at full stretch". She founded the famous race-course there in 1711 when the first meet competed for Her Majesty’s Plate (worth 100 guineas). The seven runners were sturdy English hunters which had to hold up through three heats, each four miles long! The popularity of Ascot Races died off in later years, but was revived by the Duke of Cumberland in the 1760s. His nephew, King George III, was also a great patron and, in the 1790s, set up the first Royal Stand (which became known as the Royal Enclosure in 1845). Today, there is sufficient, if limited, shopping available in the wide High Street but Facilities tend to be geared towards the racecourse as it dominates the town centre. 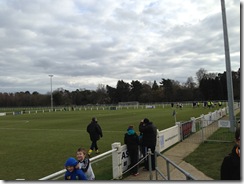 Ascot United was founded in 1965 by a men’s team who played their games at Sunninghill, who met afterwards in The Wells pub in Cheapside. Within three seasons, the club had gained permission from the Ascot Racecourse Trustees to convert the land north of coach park 10 into a football pitch. In 1990 the club started to work on some improvements to its infrastructure, with a new club house being erected at the Racecourse Ground, and a season later a new pitch and training area was constructed on waste land. The work continued in 1992 when the clubhouse was converted and Floodlights added in 1994. With the work carried out off the pitch, results started to improve on the pitch with the club winning the Reading Evening Post Cup final at the Madejski Stadium in 2006 season, and the following season winning the Reading League Senior Division. This league title gained them promotion to Hellenic League Division One East in 2008 and they finished Runners-up that season to achieve promotion to the Premier Division. The club made its debut in the FA Vase in the 2010-11 season and in 2011-12 the club made its debut in the FA Cup. Their debut in the FA cup was also special as it was the first ever game to be broadcast live on a social networking site, when they played Wembley FC in the Extra Preliminary Round of the FA Cup, shown on Facebook. 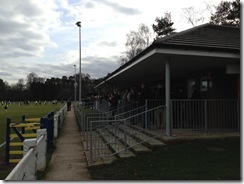 This season Ascot have had their season disrupted somewhat (as all clubs reaching this stage do I suppose) by the FA Vase and so were down in 11th position in the league but with at least 3 games in hand on the teams around them. The team play around 20 mins away from the rail station but it is a nice walk that includes walking underneath part of the racetrack and through the town centre. The Racecourse is not your typical Hellenic League ground (from what I’ve been informed about the standard of grounds in the league) as it actually resembles a small non-league ground. With the club upgrading its facilities to meet Step 5 requirements with new floodlights in 2009 and a new clubhouse in 2010, this is a more than pleasant place to watch football. While the far side of the ground is fairly undeveloped with just hard standing in place, two areas of cover and the spacious clubhouse with the excellent tea bar on the other side is a great place to stand. Even with a larger than normal crowd of just over 470, there was still ample room to get a good view and makes the capacity of 1,100 seem quite realistic. 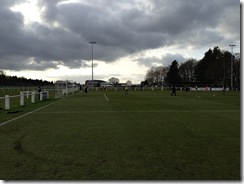 As Newport were essentially the home team (albeit playing 85 miles away for this game) for this tie, a fair few islanders had come up to support The Port. Newport had started their Vase campaign back in the 2nd Qualifying Round and wins against Alresford Town, Swanage & Herston, Cadbury Heath, Ardley United and Brighouse Town set them up for their 3rd appearance at this stage. Defeats to Bamber Bridge (in 1992) and Banstead (in 1993) meant that Newport were going for their first win at this stage to reach the QFs. Newport were also in midtable in their respective league, the Wessex, but with 5 games in hand on current leaders Alresford Town and only a 8 point deficit to claw back, a title push is well in their hands. This was a tough game to call as while Newport were probably the stronger side on paper, they had lost home advantage and Ascot were a fairly good outfit themselves. I love the FA Vase. 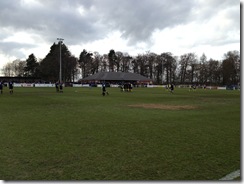 It was the home side who took the game to Ascot early on too as having superior possession and looking the more dangerous side. An early header was fired wide before Ascot were done by one of the most shocking set plays of them all. A short corner. 15 minutes had gone when Newport played this and Ascot fell asleep, allowing Jonny Holmes an unmarked header to put the ball past Chris Grace. While Ascot tried to get back into it, the Port always looked like they were in full control and had their Ascot attack under wraps. Referee Mark Pottage then got involved on 37 minutes and looked to have ruined the game when he sent off Ascot player/manager Jeff Lamb after a 50-50 challenge with Holmes. The Newport player’s reaction most likely made Pottage get the red card out with all the neutrals around me agreeing that it was not a red card. Newport then tried to play out the rest of the half and this should have been easy against 10 men. However, much to my amazement, Ascot grabbed an equaliser on HT. Some excellent work down the right by Dave Hoar led to a goalmouth scramble that Ben Knight finished off. They nearly went in 2-1 up as well as Port goalie Gary Streeter saved well from Rob Saunders. 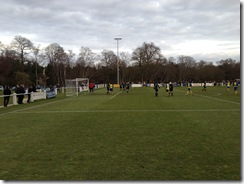 The 2nd half should have been an interesting one but the referee decided again to intervene and award Newport free kick for an alleged handball. Ascot were furious with the decision but that was no excuse for not defending the set-piece at all and allowing Tom McInnes another free header to make it 2-1. Newport kept pushing forward but Ascot kept in the game and made the game interesting despite the 1 man deficit. The last 10 minutes of the game is where the game really kicked off as both sides went for it and Ascot had done well to get back into it. While most of the ball was being played in and around the Newport area, Ascot couldn’t deliver a final ball to create an equalising chance. In fact the Port had two chances to wrap the game up late on as we went into a massive amount of injury time. Firstly, Newport broke from a corner and John McKie looked favourite to beat the defender to the ball and go one on one. He did win the battle and score but only through pulling the defender’s shirt back however and the goal was chalked off. They had an even better chance later on when James Butt broke away down the right and his cut back found McInnes but his low drive was brilliantly saved by Grace to keep the game alive, only just. Ascot appeared to have their final chance when a cross from the left was met by Justin Clayton but it just went wide. With time really in the last chance saloon on 96 minutes, Saunders got down the left and curled a cross to the back post that was met by Jack Smillie. Instead of going for glory he cut it back along goal where Jon Bennett was all alone to slide in and grab an astonishing equaliser for the 10 men. Extra time required. 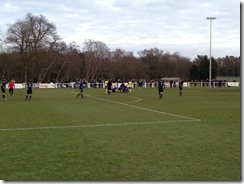 Ascot really went for it in extra-time as Newport despite having a man advantage were dead on their feet. Knight just missed a connection with a Bennett cross as the Port defence were getting pushed further and further back. Most of the extra 30 minutes was a slog as both teams had given so much to the previous 90 it was no real surprise. The ref wanted one final moment in the spotlight when he denied Ascot what looked a pretty nailed on penalty for handball as most of the crowd were amazed it wasn’t given. It wasn’t though and so there had to be a replay at Ascot as they were technically the away team for this tie. 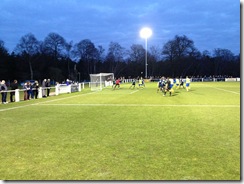 Played the next Tuesday, I did want to come to this game but my body clock would have killed me for having another late night so followed the game on Twitter while watching a Bundesliga masterclass on TV. The match sounded fairly even until Ascot nicked a goal before HT with Jon Bennett getting his 2nd of the tie after Newport’s Alek Przespolewski had hit the top of the bar. The 2nd half saw Ascot go 2 up with a brilliant Bennett volley before Przespolewski did pull one back but Ascot managed to play out time and reach the QFs for the first time and continue their record breaking Vase run.

They now play Northern League side Shildon from County Durham away in the N.E which will be a really tough game for them. I’ve already said I reckon Shildon will win the tie which has got me some stick on Twitter but we’ll see. Getting to the Quarters is a brilliant achievement and I hope loads go up north. Sadly, I’ll be even further north that weekend in Edinburgh but again, I’ll be sticking to Twitter to get score updates and will be back on the Vase trail for at least one of the Semi-Final legs. It was good to finally get to this tie played (well half of it anyway) and Ascot are a really friendly club so can only wish them well for the future. The FA Vase, it always delivers.

- Value for money: 7/10 (normal for this stage of the competition) 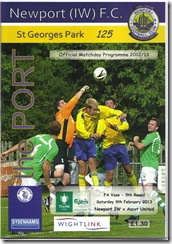