It had been 3 months since I last watched the Morecambe boys in the south after the glorious last minute equaliser against Wycombe. Since then, the Shrimps had picked up and some excellent recent results meant that relegation was no longer a fear and the play-offs looked a real possibility if we could keep our form up. It was now time for the Shrimps last visit to Underhill, the current home of Barnet FC. Having missed this game last season and time running out for the ground, there was no chance I was missing it this time having pencilled it in since the fixtures came out. 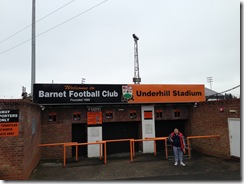 High Barnet (or Chipping Barnet) is a place in the London Borough of Barnet. It is a suburban development built around a twelfth-century settlement and is located 10 miles north north-west of Charing Cross. The town's name derives from an ancient settlement, recorded as Barneto in c.1070, Barnet in 1197 and La Barnette 1248. Its meaning is 'the land cleared by burning', from Old English bærnet, referring to the clearing of this once densely forested area in early times. This was the site of the Battle of Barnet in 1471, where Yorkist troops led by King Edward IV killed the rebellious "Kingmaker" Richard Neville, Earl of Warwick. Barnet Hill is said to be the hill mentioned in the nursery rhyme "The Grand Old Duke of York". It is also the site of an ancient and well-known horse fair, whence comes the rhyming slang of Barnet Fair or barnet for 'hair'. The fair dates back to 1588 when Queen Elizabeth I granted a charter to the Lord of the Manor of Barnet to hold a twice yearly fair. Famous Barnet Market is now over 810 years old. In Saxon times the site was part of an extensive wood called Southaw, belonging to the Abbey of St Albans. The name of the town appears in early deeds as 'Bergnet' - the Saxon word 'Bergnet' meant a little hill (monticulus). Barnet's elevated position is also indicated in one of its alternative names ('High Barnet'), which appears in many old books and maps. According to local belief, though not verified, "Barnet stands on the highest ground between London and York." The area was historically a common resting point on the traditional Great North Road between the City of London and York and Edinburgh. 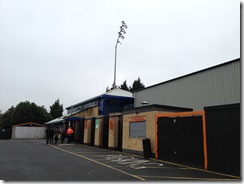 Barnet FC were formed in 1888, having formerly been known as New Barnet FC (1885–88) and Woodville FC (1882–85). The club's origins are from ex-scholars of Cowley College and Lyonsdown Collegiate School. Initially they played friendly games before becoming inaugural members of the North London League in 1892/93. They went on to have success in the North Middlesex League Division II, Division I and the Premier Division. Promoted to the London League Division II, Barnet became champions in 1898 and spent the following seasons in London League Division I before ceasing to exist in the 1901/02 season. For over 50 years Barnet FC competed in the Athenian League. Inaugural members in 1912–13 they were league champions no fewer than seven times between 1919–65 before turning professional in 1965. Their first season in the Southern League saw them finish top and promoted to the Southern Premier when they became cup specialists. Reaching the semi-final of the FA Trophy in 1970 (losing to Macclesfield) and the 3rd Round of the FA Cup in 1971 (losing to Colchester Utd). When the Alliance Premier League was created, Barnet were founding members and while struggling at first, they improved and started picking up 2nd place spots to just miss out on promotion to the Football League in the 80s. 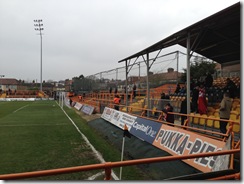 Their first two games in the FL were a 7-4 defeat to Crewe and a 5-5 draw with Brentford in the League Cup. After reaching the play-offs in their first season, in 1992/93 they finished 3rd to achieve promotion to the 2nd Division. After some financial problems and most of the promotion side leaving during the summer, Barnet were promptly relegated back to Division 3. (25 points from safety) They floated around Div 3 until 2000/01 when Tony Cottee took charge midway through the season and were promptly relegated back to the Conference. They managed to get promoted back to the FL in 2005 but have struggled ever since and have only saved themselves on the last day of the season for the past 3 seasons. This season has seen another one of struggle, but bizarrely have Champions League winner Edgar Davids in their team and as Head Coach after Mark Robson had seen his contract terminated. By only winning their first game in October, Barnet have been down in the bottom all season and came into this game in 21st place, just a point clear of the drop. They had started to pick up wins however and have a fair load of loan players in the squad to help them secure their FL status. 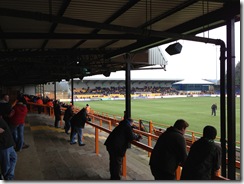 Their ground of Underhill has been home to Barnet since 1907, however an inability to renew the lease on the ground and failure of the London Borough of Barnet to fully help the club build a new stadium in Barnet will see them move at the end of the season. They are moving to The Hive, in Hendon which looks like it will be a bland 4 stand identikit stadium. Woopdy-do. That being said, Underhill isn’t a particularly great ground with some good classic terracing, spoilt by adding plastic stands at every corner. The East Terrace is shared by both home and away fans and is a good classic stand as is the uncovered North Terrace behind the goal. In between this is a pointless away seated stand called the North Family Stand before Barnet have tried to fit as many stands as possible on the other two sides of the pitch. Maybe it’s just me but it’s not a favourite ground of mine and I might even enjoy the 3 sided Hive next season, should I visit with Morecambe in 2013/14. 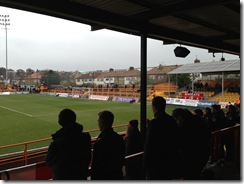 Since seeing that last minute Jack Redshaw equaliser at Wycombe, the Shrimps have gone from 17th to 11th and with an outside chance of the playoffs after good results against Aldershot and at Port Vale (when they lead the league) meant that with 10 games to go (including this one) we were only 9 points off 7th place. Games against teams struggling near the bottom would be tough, but it should be games that we could get something from. Especially if we showed the same fight and spirit that I saw in the 2nd half at Wycombe. I had also brought along for this game my work colleague Phil, who despite being a Macc fan, was today being a plastic Shrimp for his 2nd visit of the season to Underhill. (Coming along as a Bradford fan earlier in the year). 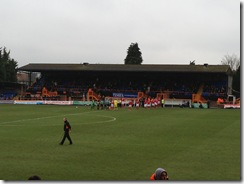 It had been noted on Twitter that during the warm-up, one side appeared to want to win this game a lot more than the other one. That was the home side and they went into it at full pace as like the Wycombe away game, Morecambe just didn’t get started early on. It wasn’t through good defending however that Morecambe kept it at 0-0 early on, it was largely Barnet being so wasteful that it stayed goalless. Maybe Morecambe (like the away fans) were not used to seeing Edgar Davids playing League 2 football, but while his legs have pretty much gone, the mind and the passing ability is still there. He found Mauro Vilhete early on with a cross that Barry Roche did well to save (although it was offside anyway). Ross Jenkins was next up as Dani Lopez got a cross in all too easily but Roche was there again to make the save. Barnet were well on top and on 26 minutes should have had the lead when Lopez got on the end of a cross and his header clattered the crossbar. The ball came back out to Davids who met the ball with a diving header but put the ball wide despite the open goal. Morecambe had offered nothing at this point but when Chris McCready fired well over in the penalty area, we all felt we could slowly come into it. Amazingly, we did and took the lead with a goal marked “Textbook League 2 Route 1 football.” Roche’s long goal kick opened up the Barnet defence and Jack Redshaw controlled it, took a few touches to run on and slotted past ex Hibs wanker Graham Stack. Easy. Both sides had a chance both HT as Redshaw’s low shot was just deflected wide, but 1-0 up at HT with that performance was excellent. 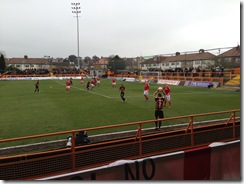 I felt that even though Barnet would come out fighting for the points in the 2nd half, if we held off the early storm, we’d pick them off. It was no surprise when they did come out firing and Luke Gambin fired an early warning shot wide. Despite 52 minutes being played, Barnet hadn’t created a chance that you thought, “yeah, fair play” and when Dani Lopez sliced his chipped through ball to the middle of the box, you thought it was be that way again. However, Nick Fenton stopped moving altogether and Roche decided to try and come for the ball despite never having a chance of getting there to leave Gambin an easy header to equalise. Morecambe do have a habit of shooting themselves in the foot and quickly found themselves trailing to a side who, quality wise, are a non-league team. A weak freekick was awarded to the home side by ref James Adcock and Davids’ ball was again defended dreadfully as Roche fumbled and Lopez was on hand to fire in. It got worse (no really) as an aimless ball allowed Roche and Will Haining to stare at each other as Gambin nipped in and so Roche had to take him out. Penalty and Roche was promptly sent off. Sub goalie Andreas Arestidou brings me all of the confidence of a Cypriot Bank, but he never had a chance with Lopez’s penalty as he fired it down the centre and off the bar. Barnet clearly remembered the 4-1 defeat to Morecambe earlier in the season at the Globe Arena and equalled that scoreline when the Shrimps defence went missing again Mark Byrne’s cross and Lopez fired home for his hat-trick. Redshaw had a chance to get some pride back late on with a 1 on 1 chance, but Stack easily saved his shot. 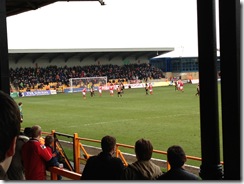 This was my 14th time watching Morecambe play and this was easily the worst performance of the lot. Barnet are not very good, but fully deserved their win in this game to keep their survival hopes up. Since this game, they have also beaten Fleetwood who are sinking like a stone and claimed a credible draw with Cheltenham to set them up nicely with some crunch games against relegation rivals AFC Wimbledon and Torquay Utd. As for Morecambe, costly dropped points against Northampton and Gillingham as well as a desperate defeat against Wimbledon means that with 6 games left to play and a 10 point deficit to the play-offs, there can afford to be no slip ups. This will be starting with the game against Oxford, one which I’ll be at. Goodbye Underhill, you won’t be missed. 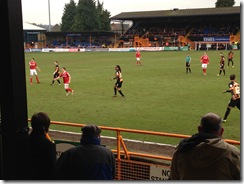 Photos from Barnet vs Morecambe 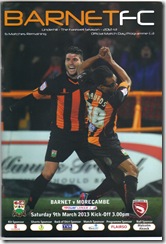 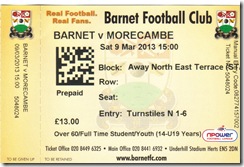